Both on and off the pitch, things aren't going great for Chelsea at this moment. Recent performances have been dire and the talks of dressing-room/training-ground tension have been making headlines. Fans' belief in the players, the manager and the team is at all time low. This is probably not the best time to face one of the most lethal teams in Europe, but here we are, on the verge of a Champions League meeting with Napoli.

Everything can change of course. Getting a good result in Europe (no matter how slim that chance is) can spark a major turnaround for Chelsea at this stage. And studying how Napoli managed to beat another English team -- Manchester City -- at home in a Champions League game might help Chelsea achieve that goal. So, here are scout notes from Napoli's 2-1 win over City in the group stage this season's Champions League. 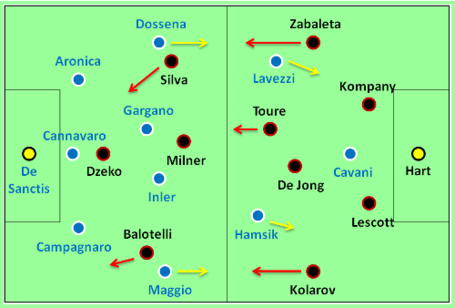 The Italian side lined up in their usual 3-4-3 formation with Maggio and Dossena as wing-backs. Cavani led the attack with support from Lavezzi and Hamsik. Gargano and Inler anchored the central midfield and set in front of the defensive trio Aronica, Cannavaro and Campagnaro.

Despite being at home, Napoli's game plan was to allow City to have the ball and to hit them on the counter. Thus, their 3-4-3 looked, for the most part, like a 5-4-1 with all their wide players pulled back. On the break, they tried to get the ball to one of the front three as quick as possible and their wing-backs pushed on to overlap.

City set out in a 4-2-3-1ish shape with Milner in the hole. Lone striker Dzeko was supported by Balotelli and Silva on the flanks. Toure and De Jong sat in front of their back four.

The away team had a far more proactive approach to the game. The Manchester side tried to create chances through possession and patient build-up. Of the two wide men, Balotelli stayed high and wide while Silva tended to drift to the central area. With Napoli deep in their own half, both Kolarov and Zabaleta were able to bomb forward and join the attack. It is good that the fullbacks can contribute to the attack but it also made City vulnerable to Napoli's fast counter attacks.

Of the two City central midfielders, Toure was very much involved in the attack while De Jong sat deep to cover the holes left by his forward-running fullbacks. The Ivorian midfielder attempted and completed the highest number of passes in this game.

As mentioned above, Napoli were happy to sit back and let City have the ball. The away team had about 70% ball possession at the end of the game. City, unsurprisingly, attempted 740 passes, more than twice as many as Napoli's 320 passes.

However, the majority of these passes are made either in their own half or in the center of the pitch with very little penetration. Against a very compact and organized defensive unit of Napoli, City weren't able to create meaningful chances out of their possession.

City's problems aren't limited to their inability to make use of their possession. When they were presented with rare chance of counter attack, they did not break fast enough and gave Napoli the time to re-organize. The picture above shows two of City's counter attacking opportunities. In both occasions, the ball did reach the front three fast enough. By the time the ball got into dangerous position, there were plenty of Napoli players back defending (yes, including Cavani who dropped all the way back to help out his defense). To state the obvious, speed determines the effectiveness of a counter attack.

Going into this game, Chelsea can either try to play possession game, just like City did, or try to beat Napoli at their own game and play on counter attack. Chelsea at this moment are having trouble breaking down Birmingham's defense. So, it is hard to see how they might go about dismantling Napoli with a possession game. However, having a ball-playing center back like Luiz can help the cause. With plenty of time on the ball, the Brazilian can either launch a direct long ball to his attacking teammates (as he did against Fulham) or push forward to get involved in the build-up (as he did against Birmingham). The down side, of course, is that Napoli can exploit the Luiz-shaped hole in the defense if not properly covered.

A better option for Villas-Boas might be to try and beat Napoli at their own game -- sit back, absorb the pressure and hit them on counter. This, of course, is easier said than done, but Chelsea have played a good counter attacking game against Newcastle in the league and came away with goals.

It will be interesting to see which approach -- possession or counter attack -- AVB will deploy. It is also a good debate topic. The comment section is your soap box. 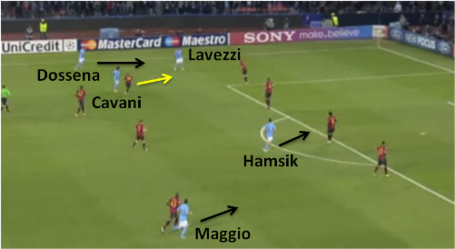 A staunch defense is just one side of the counter-attacking coin: the other is the lethal attack. Through Cavani's hold-up play and clever movement, Napoli score the game winning goal.

Defender Aronica intercepted a pass around the center circle and found Cavani in an advance position. De Jong quickly closed him down but the striker didn't have to wait long for reinforcement down the flank as Lavezzi made himself available while Dossena began an overlapping run. Hamsik, meanwhile, looked to move into central area and Maggio joined the attack from the right.

City, on the other hand, had all their defenders back but left a huge gap between the two defensive lines since Milner and Toure were out of position. 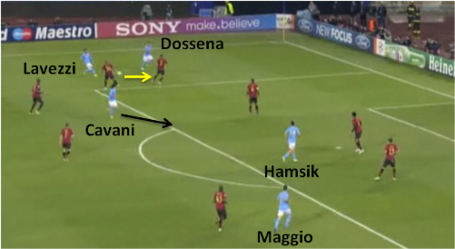 After laying the ball to Lavezzi, Cavani moved into that gap between City's defensive line. Dossena overlapped Lavezzi to receive the pass. 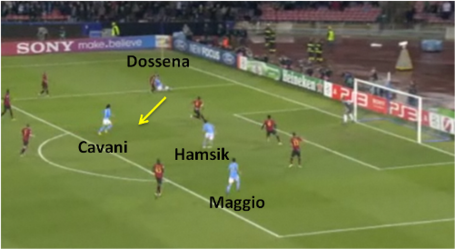 Dossena cut back to Cavani and the Uruguayan found the back of the net with a neat finish. Speed played a role in this counter attack but it was not the deciding factor: Cavani's patience on the ball and his movement ultimately made the difference. However, Napoli could also counter attack with break-neck speed. 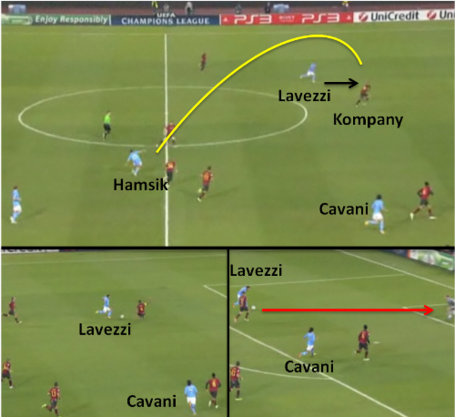 In their attempt to find the second equalizer, City had to commit more men forward; both of their fullbacks stayed very high on the flanks. This made them even more vulnerable to Napoli's counter attack. In this instance, Hamsik found Lavezzi with a delicious long pass. Unlike Cavani in the previous counter attack, Lavezzi did not wait for back up; he skinned Kompany with some footwork and took a shot. If not for Hart's save, City would have been in deeper trouble.

One of the reasons why City had a hard time creating chances despite their superior ball possession was that their two central midfielders were not able to provide dangerous long passes to their forwards. De Jong is a very defensive minded midfielder. Toure, on the other, has engine to run forward but he is no Pirlo. Thus, Napoli players did not have to come out of their defensive positions to close these two players down. If one of them were more creative: (1) they would not only be able to create chances from deep and (2) Napoli players would have to come out and press, effectively leaving space in behind for City player to exploit (h/t to ZonalMarking). 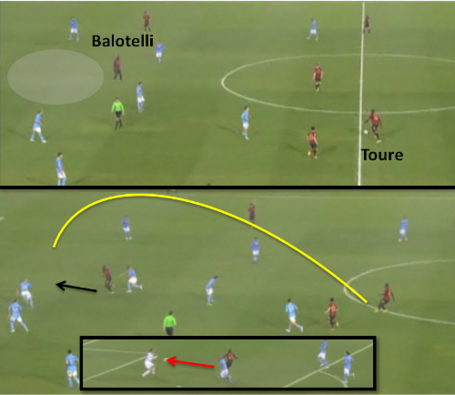 There was a rare instance in the final minutes of the game when Toure did make a long pass to Balotelli who was then playing as the central striker. Balotelli got on the end of that pass and forced a good save from De Sanctis. But this game too late in the game and did not occur often enough to impact the game.

This is something Chelsea can definitely look into. In Lampard, Meireles and Luiz, Chelsea have players who can execute this kind of accurate passes, and in Drogba and Sturridge, players who can finish them. I don't mean we should punt the ball aimlessly up the pitch every chance we get. But cleverly used long passes can do Chelsea a lot of good, especially since they will leave us with a lot of bodies back, in case Napoli hits back with a counter attack.

If you have read it this far, you are pretty crazy. It is even crazier to have written it this far and my brain is shutting down. So, excuse me for not having a proper conclusion.