More on aging: A deeper look at the last two seasons and a comparison to the rest of the top seven

Share All sharing options for: More on aging: A deeper look at the last two seasons and a comparison to the rest of the top seven

Graham did an excellent piece the other day which looked at whether or not the Chelsea squad was actually getting older or not. He came to the conclusion that on the whole, Chelsea are actually running out a younger squad this season than they did last year. We've also had a considerable amount of debate about Andre Villas-Boas's squad selection. Quite a few people are questioning why he doesn't give the youth a chance, a conclusion which seems to be at odds with the general findings of Graham's piece. With this in mind, I decided to take a deeper look at exactly how Andre Villas Boas is distributing minutes to his squad.

Before we get in to what I found, let me explain what data I used here. First, I wanted to set some parameters to reduce statistical noise as much as possible. Because of that, I chose to only use Premier League contests when comparing numbers. My reasoning behind this was that certain clubs treat cup competitions less seriously than others, and European group stage games can often lead to glorified reserve team being trotted out. So for today, we're simply looking at Premier League games.

Most studies I've read come to the conclusion that players enter their prime years at 24 years of age and generally begin to rapidly decline at the age of 30. Because of this I decided to break the players in question into 3 basic age groups. Players 23 and under went in one category. Players between the ages of 24 and 29 are my second group. Player aged 30 and up are my final selection. Goalkeepers tend to have a different aging curve than outfield players, so I ignored them entirely for this exercise.

I broke down the total number of minutes every Chelsea player has played this season and then assigned them to the corresponding age group established before the jump. From there it was fairly simple to figure out exactly what percentage of the minutes every age group was getting. Since Chelsea play in England and the English are known for their love of pies, I decided a pie chart would be an appropriate way to view this data: 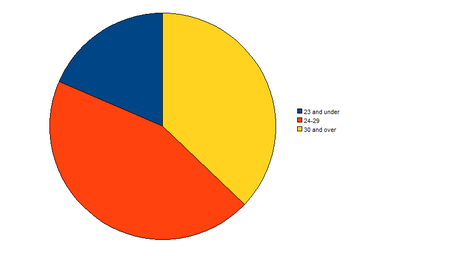 Interesting stuff for certain, it really highlights that quite a few minutes are still being played by "the old guard". Ideally we'd like to see the blue section of the chart become a little larger, the orange sections of this chart being considerably larger, and the yellow section shrinking by at least half. Just looking at this chart would lead me to the conclusion that we need to get younger, something our recent transfer activity would seem to back up.

While this is certainly useful information to know, how exactly does it compare to last year? Here is the 2011/12 data compared to the 2010/11 numbers: 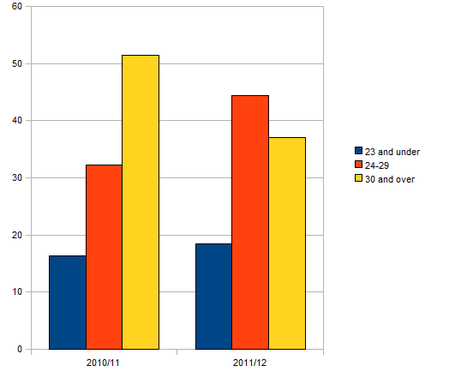 As you can see, Andre Villas-Boas has phased out quite a few of the old guard this year while giving the 23 and under crowd a larger overall portion of the minutes. What makes this even more surprising to me is the fact the 90.3% of the minutes Carlo awarded to the 23 and under players went to 3 guys (Mikel, Ramires, Luiz) who all fell into the 24-29 age group this season. By just looking at the above chart I think it's safe to conclude that AVB is less reliant on the 30 plus crowd than Ancelotti and willing enough to give the youngsters a chance to phase them out. It also helps to explain some of the results we've had, as we're clearly transitioning to quite a few new players getting large portions of the minutes.

Having compared this year's Chelsea squad to last season's model, I thought it would be interesting to see where exactly we stack up in comparison to the rest of the current top 7 teams. Below you'll find the raw percentage data for each of the top 7 squads in the Premier League in order of their standing at the close of the January window:

Tables are never as much fun as graphs, so here's all that information in graphical form: 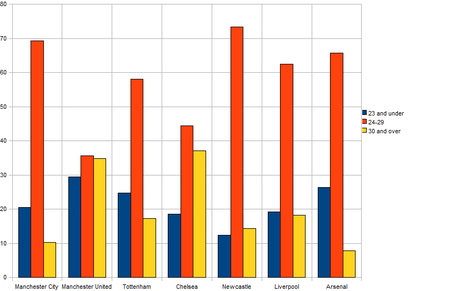 More interesting stuff there. It would make sense that the squads with the most minute played by players in their prime would probably be more likely to have a sustained spell of successful results than a squad featuring mostly fading stars or young talents. You'll notice that the "prime aged" players had the largest amount of minutes for every single one of the top 7 clubs. You'll also note that certain clubs have a much larger orange line than others, meaning the bulk of their minute are being played by footballers in their prime.

One thing that I found interesting is that the two most successful clubs in the past 7-8 years also happen to be the only two who haven't given a simple majority of their minutes to players in their prime. Both Chelsea and United give over 1/3 of their minutes to players over the age of 30, with the third highest total being Liverpool at just 18.2%. It should be pretty clear by simply looking at those numbers that these two squads are in transition. What's striking is just how well United have developed talent in their academy, having quite a few 22 and 23 year olds getting loads of minutes.

There are any number of things that we can conclude from this data, but I'm going to ignore what it likely means for other clubs and focus on Chelsea. Just by stacking our distribution of playing time up against our closest Premier League rivals it should become fairly clear that we need to continue investing in youth. While we are certainly closing the gap to many of our younger rivals, years of buying players who had already reached their prime years and ignoring youth development has left us needing an even greater injection of fresh blood. The past two transfer windows have been a good start, but we can't stop there.

We're currently 23 games in with 15 still to play, so I think this will be a good exercise to revisit at the end of this season. What's also worthy of note but not shown in these graphs is that vast increase in the number of minutes the youngsters on loan have received to this point in the season. Where many of our promising youth were farmed out during the first half of this season, most of our top youngsters were training in London and making sporadic appearances on the bench last year. We'll really be well served if one or two of those kids is ready to contribute at Chelsea next season. Hopefully that will help us to phase out the "old guard" even further next year.