Chelsea have released their 25-man squad in light of the wheelings and dealings of the January transfer window, and there aren't too many surprises. Nicolas Anelka and Alex both depart, which frees up two international slots, and Gary Cahill's acquisition means that we've added another homegrown defender to the ranks. Hurray!

However, losing two senior players and adding one from a squad of 24 leaves us with 23 players (isn't maths fun?), which means we get to add two more players to the roster, if we feel like it. Instead of making a big splash in the window to make up the gap, Chelsea turned to recently un-retired 22-year-old Sam Hutchinson, who takes our home-grown complement to a full eight.

But I'm getting ahead of myself here - first, an explanation of the home grown rules...

According to the Premier League, a homegrown player is defined as follows:

A home-grown player will be defined as one who, irrespective of his nationality or age, has been registered with any club affiliated to the Football Association or the Football Association of Wales for a period, continuous or not, of three entire seasons or 36 months prior to his 21st birthday (or the end of the Season during which he turns 21).‬‪

So Romelu Lukaku, signed from Anderlecht this summer, will be a home-grown player for Chelsea when he turns 21 because he'll have spent three seasons with us prior to that, but Oriol Romeu, who turned 20 in September, will not - he'll count for an international spot when he loses u-21 status.

Here's a handy table if you want a reference as to the status of any Chelsea player on the squad: 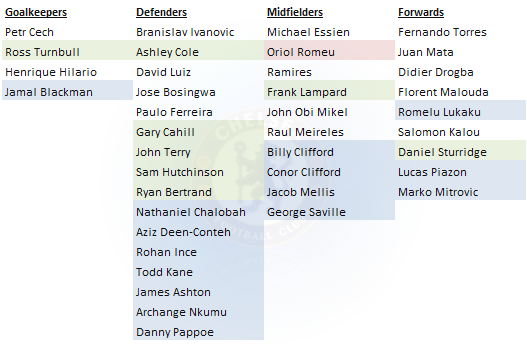 For some reason, Chelsea are describing 18-year-old Lucas Piazon as a senior player, which would take us up to a full 25 on the senior squad, but there's no way this is true unless his age has been completely misrepresented. The Blues have also listed Florent Malouda's squad number as 14, which again I'm going to assume is a mistake.

Anyway, that's the squad - we've got either 16 or 17 internationals (depending on Piazon's actual status), eight senior home grown players, and a boatload of juniors, of whom one will become an international*. There're some obvious changes to be made in summertime, and with a number of players are out of contract over the next two seasons the Blues have the flexibility to do more or less whatever they want. Neato.

*Kevin de Bruyne will also probably take up an international spot by the time he joins.