Mata vs Swansea: Foul and Frustration

Share All sharing options for: Mata vs Swansea: Foul and Frustration

Juan Mata didn’t have such a great game against Swansea. He was anonymous for most of the game, especially the first half. This is partly because Swansea pressed really well – Dyer and Rangel on Chelsea’s left flank worked tirelessly to track and close down Mata and Cole. To be fair to our little Spanish magician, his teammates weren’t helping cause either. Not many Chelsea players came out of that game looking slightly positive.

However, he does have the duty to work hard for the team when the opposition has the upper hand. We signed him for his creativity (which we all love) but it is not asking too much to expect a little bit of defensive responsibility from him. I'm talking basic stuff -- like staying in front of your mark and not losing him. Swansea had a handful of goal-scoring opportunities in the first half and Mata's defensive frailty played a role in offering some of these changes on the plate for the opposition. Here, we will look at two such instances that took placed in the first half. 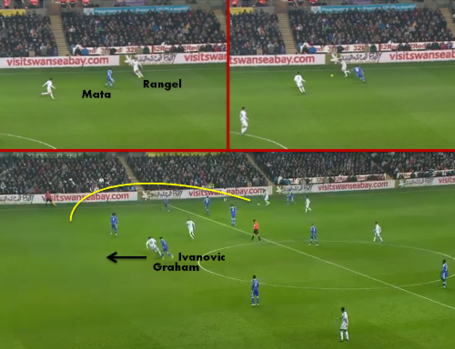 Now, in this particular case, Rangel receives a pass in his own half and Mata" tries" to press. Even from these two frames (the smaller ones above), you can see how easy it was for Rangel to go past Mata: all Rangel needed to do was take the first touch and wait for Mata to over-commit to one side. And for some weird reasons, Mata attempts to deny Rangel the pass back to his keeper or center backs (no danger zone) while opening up the path towards Chelsea’s half (danger zone). Rangel obligingly cuts onto his favorite right foot and pushes forward. No sweat.

Then, the Swansea fullback delivers an inviting long ball for Graham to chase. Cluster[fun] ensues: Chelsea needed to make three last-ditch blocks in order to deny Swansea the opening goal.

Of course, I'm not stupid enough to blame the whole thing on Mata. Cech and Ivanovic made sure the mess achieve its full potential. But he had a hand in this. More importantly, I think losing out to Rangel in this instance (along with Chelsea's lack of possession) frustrated Mata and led him to foul* the Swansea fullback as soon as he got the chance to, and Chelsea would have to pay a big price for that.

* So, the post should really be titled "Frustration and Foul" but that just doesn't sound right. There is a reason why Jane Austen went with "Sense and Sensibility" and not the other way around. But I digress.

This time, Rangel receives a pass back from his teammate in Chelsea's half. Mata is slightly in a central area but he rushes toward Rangel who, again, runs past Mata with ease. I think Mata kicked him like twice before he finally brought the guy down. It was a silly foul to give away, especially when Swansea had already came close (with Grahma's mis-shot) earlier in the game with a freekick around that very area. And we all know what happened next. 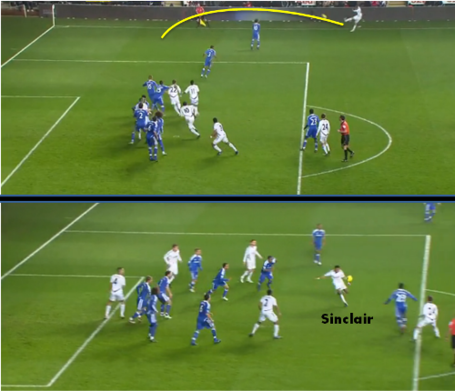 A nice looking freekick was floated in and Sinclair got on the end of a fortunate clearance. Goal.

Here's what I DON'T want you to take away from this post: I singled out Mata when almost the whole team is blameworthy for the dire performance against Swansea. No, I don't think it's all Mata's fault. But, I also think he had a responsibility which he didn't fulfill. When we don't have the ball, we need our players to be patient and composed in order to avoid do even more damage to ourselves. Mata came short in these cases. Yes, we love him but we can't let him get away with it when let us down.