Fernando Torres and the Art of Terrible Finishing

Share All sharing options for: Fernando Torres and the Art of Terrible Finishing

"Give me the ball, and the ball will be in the back of the net."

That is a line I hear, in Italian-accented English, almost every single day, thanks to SiruisXM's efforts in promoting The Football Show that is co-hosted by the legendary Giorgio Chinaglia. Giorgio was the epitome of a deadly striker, scoring 242 goals in 256 matches for the Cosmos. He had one job, to score goals, and he did it unfailingly. "I am a finisher," he told a newspaper back in 1978, "That means when I finish with the ball, it is in the back of the net." He is also loud, opinionated, boisterous, confident.

He is the Anti '3 league goals for Chelsea' Torres. The Anti 'let's blame the service from midfield' Torres. Much ado has been made about that last one, with fans (and even Torres himself) blaming passing speed, quality, and direction for his struggles. No doubt some will say that he receives the ball in "bad positions" or that he's surrounded by no less than 2 whole teams, all looking to tackle him so that they can point & laugh at his latest howler, scuffed shot, or timid dink. (You should read the take on this issue at Carefree Chronicles; I'll wait.)

Hit the jump to see just how bad it has gotten.

Let's start with the raw data, including all of Torres's seasons in England and his last two with Atletico Madrid (time frame limited by ESPN's data)*: 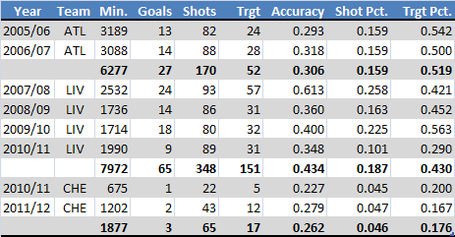 All of that adds up some incredibly bad numbers for Torres. Well below career averages in all three percentages, especially when we look at just how good he was in some of his Liverpool seasons. And while his accuracy is not all that far below his last two seasons at Atletico (less than 1-in-3 on target back then, now more like 1-in-4), his shooting percentage is abysmal, regardless of whether we look at total shots or just shots on target. He was essentially scoring with every second on-target shot before he came to Chelsea, now he's lucky to score on every 5th. Having to take 20 shots just to get a goal (~0.05 shooting percentage) is, well...just absolute shit.

The magnitude of the suck once he got to Chelsea is even easier to see in graphical form. Gloriously stupefying: 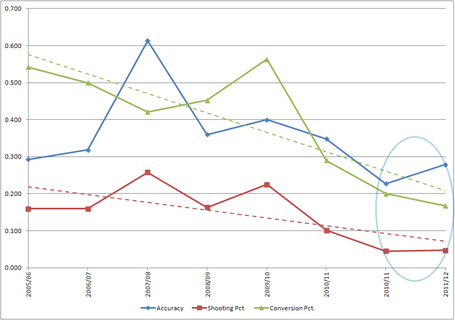 It all clearly started at Liverpool...but his last (half) season there turned out to be just the tip of the big ol' chunk of frozen poopy. Surely, we thought, he couldn't get any worse...yet he did!

And just in case we want to claim that he doesn't get as many opportunities as he's used to (and that's somehow affecting his ability to score from the shots that he does take), let's examine the data on a per-minute basis (i.e.: minutes/goal; minutes/shot; minutes/shot-on-target): 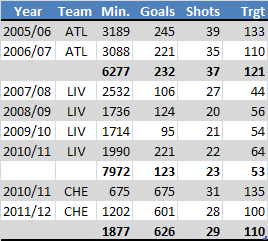 The one we're interested most in is the minutes-to-shots column (since we already know that he sucks at scoring goals). At Chelsea (again, Premier League only), he's averaged a shot every 29 minutes, which is about 25% worse than at Liverpool. It's a clear difference...but that could just as easily be chalked up to the fact that Chelsea have had other attacking options up top, unlike Liverpool who relied solely on Fernando. More damningly, he's still a far more active shooter than his last two seasons at Atletico, where he only took a shot every 37 minutes. Not to mention, in his most successful season at Liverpool, he was shooting about as often as he is shooting this season for us (27 vs. 28 minutes-per-shot).

We could argue all day about the qualitative factors in all this - quality of changes, positions in which Torres is receiving the ball, types of passes received, etc. After seeing just how absolutely horrible he is at actually finishing chances though...do we still want to rely on the crutch as if it made any substantive difference?

Can we just accept that he's (become) terrible and move on? He stood us all up at the altar and left us holding our bouquets of failed expectations and crushed hopes for which we paid a fortune.

But it's ok, Fernando. I can't be mad anymore. Forgive & forget. Maybe you'll be good (again) elsewhere. And we'll always have 'West Ham in the Rain' and 'Spectacular Crossbar Assist'...but where we're going, you can't follow.