The Slow Boat to Fourth Place

Share All sharing options for: The Slow Boat to Fourth Place

We're now two-thirds of the way through the season and the early season optimism has been well and fully dashed. While challenging for the title in a season of transition was always going to be a pipe-dream, I don't think even the most pessimistic of us expected this much struggle. Once we were challenging the Manchester duo for a place at the top, now we find ourselves locked in mortal combat for that all-important 4th place and the last remaining Champions League spot.

Having collected just 2 points from the last three (by way of a last-minute lucky deflection, a thrown-away 3-goal lead at the Bridge, and the season's the worst performance), it is certainly make-it or break-it time at Chelsea. Regardless of who gets blamed for all that, Chelsea need to rediscover some semblance of form and quick, lest we risk fading into true mediocrity.

For we're surrounded by three hungry, also deeply flawed teams: Arsenal, Newcastle, Liverpool. Fortunately, just like Chelsea, not one of them looks capable of true excellence...

Let's take a look at their performances so far this season and the challenges that lie ahead to see if we can glean any insight as to might claim that 4th place ribbon.

Instead of just waxing poetic about their stories, let's go with a graph. What you see here is a 3-game moving sum of points collected for each of the four teams. The first data point is after Matchday 3 (all but Arsenal started the season with 2 wins, 1 draw, and 7 points); 9 is the max. value (3 wins in a row); 0 is the min. value (3 losses in a row): 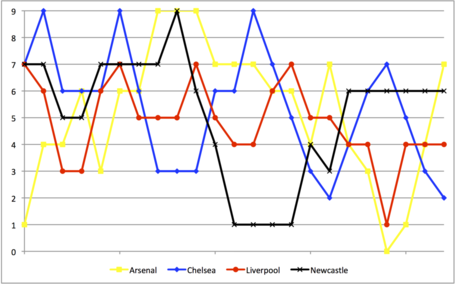 This is certainly not painting a pretty picture for Chelsea. We started strong, winning three in a row on three separate occasions, but we've barely averaged over a point from the last 10 games. The force trend is definitely NOT strong with this one.

Arsenal, currently ahead of us on goals scored have been as erratic as ever. They're still the only team of the four to lose three in a row, yet they're also the only team to win more than three in a row...while exploring every state in-between those two extremes.

Newcastle, quite consistent of late, have still not faded away. Their strong start was followed by an extended slump, but they've proved their naysayers wrong and have stayed in the hunt.

Of course, we only have to look to the standings to see who truly did the "best" of the four from the first 25: Arsenal just edging our boys in Blue on goals with Demba Ba Utd just a point off the pace. The next 13 will determine the rest and that's where quality of opposition will start to play a factor as well:

Interestingly enough, all four teams have 7 home and 6 away fixtures remaining. On average, all four teams will be facing opposition from the lower half of the table, with Chelsea & Liverpool having the easiest schedules. Liverpool & Newcastle have fairly balanced schedules remaining, Arsenal & Chelsea do not.

Ominously for Chelsea however, we have, by far, the toughest away schedule, facing on average teams placed above 9th. I guess it's a good thing that we have collected the most points on the road of the four teams so far...

Conversely, our remaining home schedule is by far the easiest. Compare that to Arsenal who face Top-8 opposition in 5 of their 7 remaining home fixtures. But despite our relative struggles at home, I sure would rather face top class opposition at the Bridge than on the road.

So. Chelsea must improve and improve a lot to have a chance at 4th place. I know that may sound obvious, but the improvement required may be even greater than we'd imagined. We may be tied with Arsenal right now, but their performances are trending up, while ours are trending down. Their remaining schedule also looks an easier ask than ours. And then there's also Newcastle, who simply will not go away, and Liverpool to worry about - and neither of them are involved in European competitions either.

In lieu of a proper conclusion, how about a poll?