Share All sharing options for: The Ivorians Doth Return

Didier and Sala are coming home. Thank the lord almighty. More, after the jump: 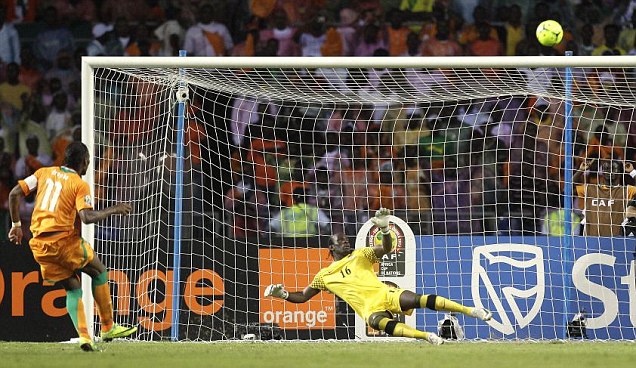 Well it's been a shit sandwich around these parts for the last month- crystallized by that pathetic/shambolic performance we were witness to on Saturday. So forgive me for latching on to the tiniest bit of hope, but I need this. Guys, I really need this.

So, Didier and Sala are coming home from the ACON empty handed- again. After gutting through a tough fixture with a feisty Zambia side, the Ivorians will leave the pitch once again without silverware, despite being pegged by many as the favorites once again. Our own Didier failed to end the proceedings on 70 minutes when he flat out whiffed on a penalty. Otherwise, it was a solid tournament for both players, who netted goals and looked thirsty in attack (something our side has been severely lacking for some weeks now).

Look, it's not as if Didier is going to come back and immediately turn the tide of tension that's brewing. The Mail, that scribe of bespoke scandal and journalistic impunity, has laid bare the details of AVB's post-Everton shakedown. In their own words, Andre got all aggro and decided it was more prudent for the squad to come to training on Monday morning instead of enjoy a day off. And apparently the players, per the Mail's word, weren't too thrilled. Stop the fucking presses.

It's garbage reporting like this that, frankly, makes the work Andre's doing (and that of his staff) that much harder. Look, it's not working right now on any level and everyone has to share in the blame. Ultimately, it will be Andre that's held accountable for the performance of the squad even though the players have to be honest in admitting they're just not getting it done right now. So much has been made of the squad being divided, players tuning out the inexperienced Portuguese-er, and our tactical gaffes.

But I think all of us would just like to see things improve, albeit slightly. Some semblance of consistency is needed in the worst way imaginable. Perhaps the return of the Ivorians will provide just that- a much needed insulin shot to our turgid attack which has stumbled upon an Arctic tundra of sorts, and couldn't find their way out of a paper bag at present. We have a Birmingham showdown on the horizon that we, frankly, shouldn't be favorites for. Not with the way we're playing, and not with the way we're reacting to adversity. It's all up-hill from here, and your guess is as good as mine as to whether AVB is leading the charge in the next two weeks (yes, there are plenty of rumblings that he may well get the axe, which I think is total nonsense). It serves us no good to continually axe coaches who hit the skids.

Change like this is inevitable. We have to endure strife if we intend to rebuild. Replacing the manager yearly solves nothing, unless Jose is magically willing to take the reigns and steer the ship back to safe waters (or Guus is licking his chops for a payday). All told, it's been a shitty week, and an even worse month. I can only hope that Didier's return is precisely the stimulus needed to get our misfiring band of misfits in order, and wake us from our doldrums.

Carefree, even if you seem to be filled with concerns friends.