Everton 2-0 Chelsea: A new low in a season brimmed with them

Share All sharing options for: Everton 2-0 Chelsea: A new low in a season brimmed with them

I'm going to attempt to keep this short because, quite frankly, spitting viciously vile vitriol is not how I'd like to spend my Saturday afternoon. Virulence really isn't going to get us anywhere. 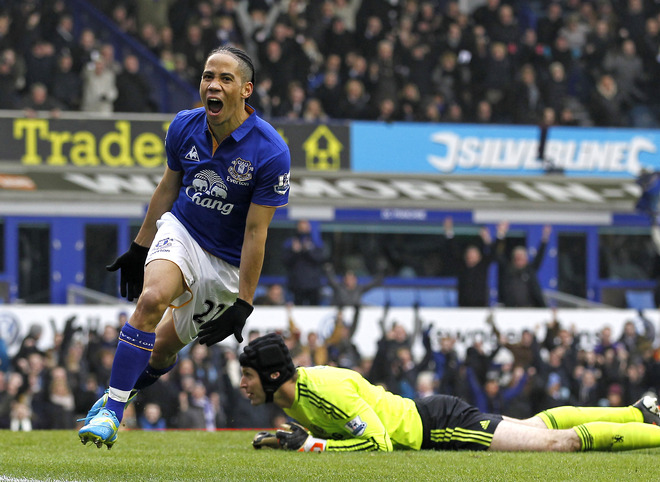 Don't worry, it got much worse.

How to sum up easily the most embarrassing day of the season thus far? I'm not quite sure. Hey, at least Andre Villas-Boas has some words ready for this moment.

Today was one of our worst games this season, in every sense of the word. We are short of anything positive.

Yes, this was as bad as it gets. Some supporters probably thought the brilliance*on display at the Liberty Stadium on New Year's Eve was the extent of the horror. The epitome of shit so to speak. There was no way in hell Chelsea could top that - or should I say there was no way Chelsea could slump to a level below that.

Does a level below that even exist? Oh yes. And it bore fruition at Goodison.

There was not even the slightest semblance of a positive for Chelsea in this fixture. We slopped about in the first half, conceding inside six minutes, and then contrived to be every worse after the interval. There were short bursts of decent - not good - play, but nothing of consequence. The second half, in particular, featured a despicable brand of football, our defense laughing it up (not in a good way) while our attacks consisted of nothing more than low-grade crosses from the flanks. Pathetic.

Jose Bosingwa set the tone for this embarrassment with a deluxe shit sandwich in the sixth minute, blowing a throw-in and then failing to track the incisive run of Steven Pienaar with any intensity. The South African thus waltzed into the penalty area, controlled a weird ricochet off Frank Lampard and roofed a shot past a helpless Petr Cech. To categorize this as anything other than predictable would be doing this pub team a disservice. Me, I didn't even get pissed. I have unfortunately come to expect such ridiculousness this season.

Everton continued to out-work, out-muscle and out-think us throughout the first half and for most of, if not all, the second. Credit to David Moyes, who must be considered among the best managers (pound for pound) in England. His players really work hard for each other, something I'm sure Villas-Boas wishes he could say about his current crop of prima donnas.

Who isn't to blame? Everyone must raise their hand on this day. AVB got it wrong. Why not stick with the 4-2-3-1? And these players, my word. Fernando Torres was Charmin-soft, more interested in arguing with the officials than getting on with actually trying to score a goal.  Juan Mata didn't show up and Daniel Sturridge buzzed about but didn't do much of anything. Our midfield cocked up, particularly the anonymous Raul Meireles, while our defense bordered on being the blunt of all jokes. The less said about Bosingwa and Ashley Cole the better.

It's a sad indictment of the side when you're actually somewhat happy your left-back has to go off with an injury. Of course we wish Ashley all the best and hope he's not seriously injured, but I won't deny it was nice to actually see Ryan Bertrand on a pitch. During a Premier League match no less. Wow.

What else to say. Did I mentioned we were shit? I did? Good.

Just to knock it out before it becomes a problem: No, AVB doesn't need to be sacked. Get off it. What good is it going to do? These are the same issues every manager since Jose has been forced to deal with. Not one of them has figured out how to solve them on a long-term basis. I don't know how to solve them - if I did I reckon I'd be in the hot seat - but I do know that to continue the coaching carousel is bad business for the club.

Are we in danger of qualifying for the Champions League next season? Damn right we are. But I'm also pretty sure a Guus or a Jose or a Pep or a Fabio or a whoever isn't going to come in here and guarantee a magically recovery. This time just has too many flaws. Stay the course and hope for an internal recovery (as unlikely as that seems).

I know you guys must have some thoughts on the rubbish we all just witnessed so hit us up in the comments. We're looking forward to debating it up. Carefree, bitches.