Breaking down a pair of Fernando Torres goals

The Chelsea center forward has made a habit of scoring against weaker sides, but is this down to Torres or the competition?

Share All sharing options for: Breaking down a pair of Fernando Torres goals

Fernando Torres scored a pair of goals yesterday, and it was the first time in a while that he's made a truly positive contribution to a Chelsea performance (clearing and winning of corners aside). Much of the talk of the mini-revival will most certainly fall to the reunion with Rafa Benitez, and with that in mind it makes some sense to look at the build-up to those goals.

So how exactly did these goals come to be? Well let's take a look at the first. David Luiz cleared the ball out of the Chelsea box, and the Nordsjaelland touch fell to Chelsea's Juan Mata. Mata immediately sent the ball out wide to Victor Moses, as can be seen in the following screencap: 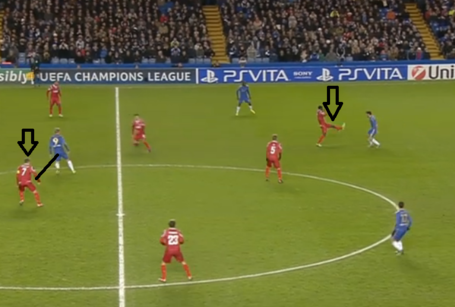 The ball in this instance is hidden by a Nordsjaelland player, but I've placed an arrow in the frame so you can tell where it is. Fernando is in a great spot here. He is onside by several yards, and he will be already positioned between the closest defender and the ball. The absolutely ideal thing for Fernando to do here would be to stay onside and close the distance between himself and Stokholm (#7), thus maximizing the space available for Moses to play the ball into.

Now we'll take a look at the spacing when Moses passes the ball: 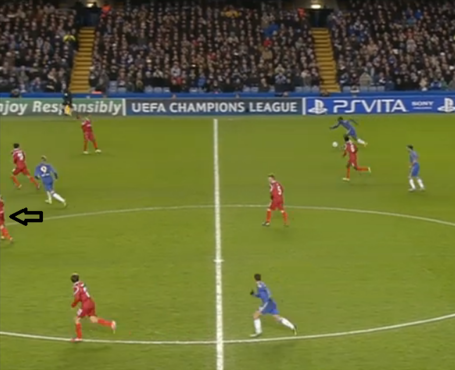 As you can see, Torres has not closed down the space to Stockholm and instead put himself on the back shoulder of Mikkel Beckmann (I've put an arrow on Stokholm, as the FSC cameras are losing him). Had Torres been on the front shoulder of Stokholm, there would be a large gap between the centerbacks for Moses to play Torres the ball. He wouldn't have to rely on his speed to beat a defender, as he would already have established position.

Torres scored anyway, as he managed to get in behind Beckmann to get a shot off. Watching the replay though, it's clear that it was as much due to a mistake Beckmann made rather than Torres simply running by him. Beckmann is a wing player that was forced to play center back due to Nordsjaelland having only one of their four available, and he had a stutter step when Moses played the ball, likely thinking about the defensive line. Torres did a fantastic job taking advantage, muscling his way around him after the defender slowed down and creating an excellent chance.

It was great to see Torres finding the back of the net, but this goal really never would have happened without a pretty poor piece of defending. This should have been a pretty easy interception, or at the very worst a throw-in for the Danish side. It's a step in the right direction though, as two weeks ago Torres wouldn't have even made the run.

Now we'll take a look at the second Torres goal. We'll start our look at this one with Eden Hazard dribbling into the 18-yard box: 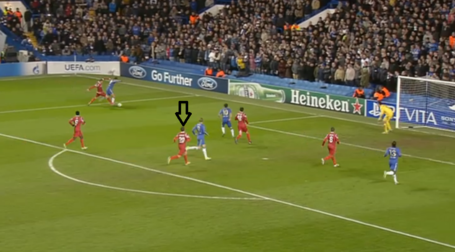 Torres is in absolutely perfect position for this frame, he can see the play developing and has space to run into for a Hazard cross. Juan Mata is coming back from an offside position, so he is going to force Michael Parkhurst to make a decision about what to do here. The ideal move for Torres here would be a run toward the near post, a run that would allow Hazard either a quick cross or an easy dump to Mata. Here is the buildup about a second later: 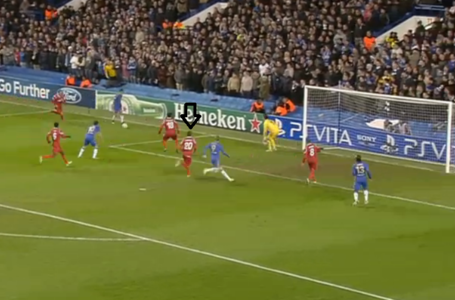 As you can see, Torres made the run a bit late. Kasper Lorentzen has now had time to get back into the play, and more worryingly, he is now perfectly placed between Torres and a potential cross from Hazard. Hazard's cross would be inch perfect in clearing Parkhurst and still avoiding the keeper, and a clever adjustment by Torres combined with an excellent finish would see the ball end up being picked out of the net.

The problem here is that he never should have had a shot in his marker adjusted to the cross, Lorentzen did not. He simply overran it, something not unexpected from a striker trying to defend. Had this been a Premier League quality player, odds are this cross ends up being an easy clearance for a corner kick.

Both of these are vintage Fernando Torres positioning and runs from his Liverpool and Atletico days. The problem lies in the fact that 2012 Fernando Torres is just not the same guy. Four years ago, Torres' explosion and speed would have allowed him to get the position he needed in both buildups without the need of an error. 2012 Torres does not have that same burst (or he hasn't shown it), and won't usually create much trouble by making these types of runs. He's not exploding behind his marker, he's relying on mistakes to compensate for his lack of explosiveness.

There were loads of positive signs from Fernando yesterday, as he was at least back to doing the things that he did so well in his Liverpool days. It's hard for me to put too much into that though, as he's generally looked strong against very poor competition. Without a doubt, FC Nordsjaellad putting together a makeshift defense is about as poor an opponent as we're likely to see this season.

Some credit is probably due to Rafa Benitez here, as you could clearly see signs of Torres doing things he hasn't done since arriving at Stamford Bridge. My worry though, is that the player we currently have just isn't physically capable of making these runs into dangerous chances against quality competition. Recognizing this and adjusting for it will likely be the defining adjustment (or lack thereof) of Rafa Benitez's tenure at Chelsea.

Chelsea vs. FC Nordsjaelland: Chelsea win easily, but Juventus defeat Shakhtar to knock out the champs