Attacking-wise, Sunderland play with plenty of width: they play the second least amount of passes through the middle in the Premier League, preferring instead to funnel play towards the pair of dribblers on the flanks, Adam Johnson and James MacLean, who generally play on the right and left respectively. Their passing and shooting is largely more focused down the left, because Danny Rose is more willing to get forward than either of the two options at right full-back - Craig Gardner is usually preferred but Phil Bardsley was handed a start against Norwich. 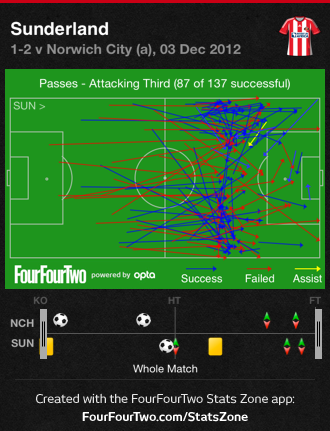 Johnson and McLean also occasionally switch positions but this tends to predictability, where Johnson constantly cuts inside, looking for shooting opportunities on his right foot. Both are extremely one-footed and one-dimensional in their play, and Sunderland look particularly weak when the two enter one-on-one confrontations. They can also be vulnerable defensively and can switch off at crucial moments, leaving the full-backs with a lack of protection and the opposition with space down the sides to exploit: something City did excellently in their 3-0 win earlier this season.

With his good passing range, Sebastian Larsson seems a natural fit in the centre of midfield to switch the focus of play, while Stephane Sessegnon is inconsistent, but offers good dribbling threat. Attacking patterns of play are centred on crossing, and providing Steven Fletcher with service in the penalty area.

The Scotsman, Sunderland's top scorer, is an injury concern: Connor Wickham was his replacement against Norwich and played a more central role to collect long balls, compared to Fletcher's tendency to drift to the right, as the excellent SB Nation Sunderland blog Roker Report noted. 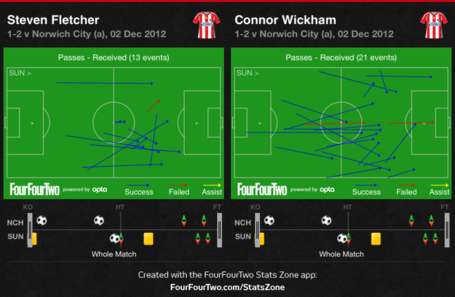 On paper, it’s a decent attack, certainly fitting of a mid-table side, even if their preferred route to goal, crosses, is an inconsistent way to score goals. 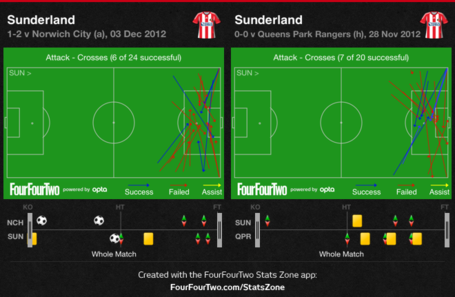 They don’t actually have huge problems with conceding goals either – they’ve only conceded two less than Chelsea this season – but the amount of shots they concede per game is more alarming: an average of 16.7 per match, the 2nd highest in the division. Historically, they’ve always been a combative side, even before O’Neill, so it’s no surprise they also record a relatively large tally of 21.8 tackles per game. One midfielder is generally tasked with scrapping – normally Jack Colback but Lee Cattermole and Gardner are also options. O'Neill might prefer Cattermole, the most aggressive of his options, to counter Chelsea's playmakers.

O’Neill might also instruct his side to sit even deeper than usual against Chelsea, as is his wont against top tier sides in the division. This seems even more likely in light of their defeat to Norwich City on Sunday, where their desire to play high up the pitch was exposed by clever movement from Norwich’s wide players. When they do so, the space it leaves for deep midfielders is enormous, as evidenced by Mikel Arteta and Joe Allen's passing charts for their respective matches against Arsenal, where both tallied over 100 passes. One might expect John Obi Mikel or Oriol Romeu to record a similar count.

Sunderland have two fine set piece takers in Larsson and Gardner, but look weak when tasked with defending them. They can be vulnerable when the ball isn't cleared immediately, and Chelsea's set piece attackers should be brave and follow through to attack loose balls.

Sunderland vs. Chelsea: Chelsea finally win again as Torres makes it 4 in 2