Breaking Down the Steven Pienaar Goal

A series of basic errors from Chelsea allowed Steven Pienaar to score this early goal.

Share All sharing options for: Breaking Down the Steven Pienaar Goal

A trip to Goodison Park is never easy but Chelsea made it even harder by conceding an early goal. A quick look that the replays showed Ashley Cole getting caught out of position on the left flank allowing Phil Jagielka to make an accurate cross to the back post. Victor Anichebe would get the better of the right-back Cesar Azpilicueta and head the ball against the post. Steven Pienaar reacted the quickest to react to the loose ball and calmly slotted it home.

However, as with most goals, there were a series of mistakes from the conceding side along the road. Let's look at which players came up short in preventing this early setback. 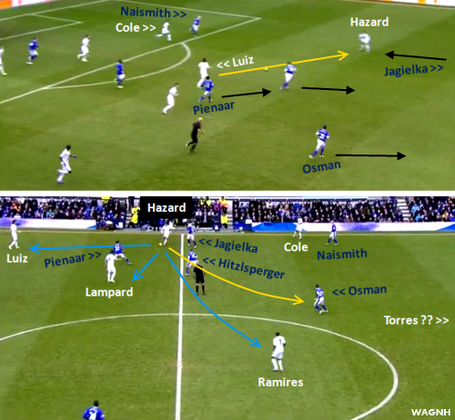 Everton started the game much better and put Chelsea under pressure from the kick off. Here, an Everton attack down the left (a Leighton Baines cross) broke down; David Luiz, playing as the lone holder at this point, picked up the loose ball and distributed to Eden Hazard on the left.

The Belgium turned with the ball, but he was quickly closed down by Jagielka, the make-shift Everton right-back. Hazard did very well to hold of the pressure and brought the ball up to the halfway line. Meanwhile, Ashley Cole, as he always does, overlapped down the left wing with Steven Naismith chasing. The eventual goal scorer Pienaar also drifted from his original left wing position to the midfield.

This was a very good defensive shape from Everton. With Jagielka closing down the pass to Cole, Hazard did not have a good forward passing option. Conservatively, he could pass back to David Luiz or squeeze a pass through to Frank Lampard. If he is being adventurous, he could go for a lobbed pass to Ramires at the center circle. Any of these options will allow Chelsea to keep possession, circulate the ball and find another route to the Everton goal.

But Hazard chose a more direct option of trying to find Fernando Torres up front, who we can't even see in this frame. His pass was poorly executed and landed straight in Leon Osman's feet. I get the idea of moving the ball quick to the center forward but Hazard was forcing it too hard and this mistake put Chelsea back under pressure. 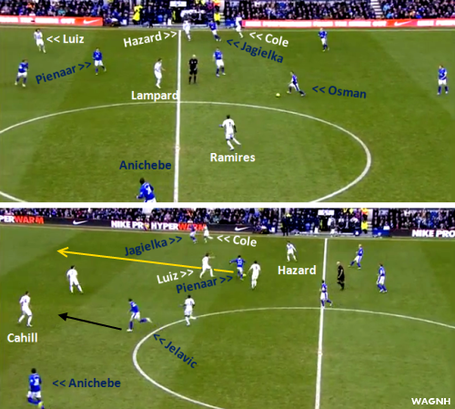 With the ball at his feet, Osman had two options: space on his left and men on his right. There was more space on his left where Anichebe could go head to head with Azpilicueta. On his right, he had Pienaar dropping back to out-number the Chelsea midfielders. Osman chose the latter option and found Pienaar with a forward pass.

Now, Hazard's initial misplaced pass left Cole out of position. But when Jagielka started moving forward, the Chelsea left-back had enough time to catch up with a center-back playing out of position. Yet somehow, Cole allowed Jagielka to stay ahead and take off down that flank; it looked like Cole gave up the chase at one point. The left-back either underestimated Jagielka's speed or his ability to cross or BOTH! (This is not how you negotiate a contract, Ash.)

Under pressure from David Luiz, Pienaar set Jagielka free down the flank. (Remember where David Luiz and Pienaar were. We will come back to this.) At this point, Nikica Jelavic made a central run facing Gary Cahill. Anichebe started down the left, aiming to get to the back post by the time Jagielka crosses. 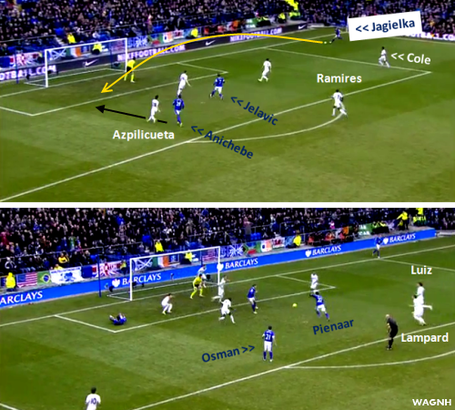 Because he had a lot of time without any pressure from Cole, Jagielka* could measure a precise cross to the back post. Unsurprisingly, Anichebe, a physically strong center forward, won the aerial battle against Azpilicueta, a slight (but fabulous) right-back. Petr Cech had his feet firmly planted in the ground and was never going to save it. Chelsea got lucky though as Anichebe's header crashed against the post.

* I'm totally sick of spelling his name at this point.

But this lucky break would not be enough. Pienaar was at the right spot to score the rebound.

"But, but wait!" I hear you say. "How was Pienaar not marked in the box? Wasn't David Luiz just closing Pienaar down just a few seconds ago?"

Well, my observant readers, you are right. David Luiz, our defensive midfielder in the short-lived 4-3-3 system, was unaware of Pienaar sneaking past him as the play developed down the flank. By the time Anichebe's header came back off the post, there were two Everton midfielders unmarked in the box: Pienaar and Osman. It was just a very poor defensive organization from Chelsea and David Luiz allowing Pienaar to roam free was criminal.

These were all simple, basic mistakes that came one after another to make things real complicated for Chelsea.

Everton vs. Chelsea: Blues close 2012 with a win