Chelsea struggled early on with 4-3-3 but improved and made a comeback after a switch back to the familiar 4-2-3-1.

Share All sharing options for: Everton vs. Chelsea: Match analysis

The injury to John Obi Mikel along with rotations of Oscar and Victor Moses brought Frank Lampard, Eden Hazard and Ramires into the team that beat Norwich 1-0. However, the changes were not limited to team selection as the interim manager Rafa Benitez set the team up in a 4-3-3 rather than the usual 4-2-3-1. Juan Mata positioned on the right wing as Lampard (LM), Ramires (RM) and David Luiz (DM) made up the midfield trio. 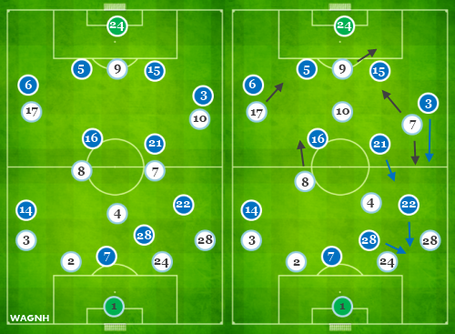 This tactical move didn't work, but there are good reasons behind it. The most obvious is the advantage in midfield: Chelsea's three midfielders will go up against two Everton central midfielders. In theory, the extra man around the center circle should allow the away side to dominate possession and boss the game. Positioned on the right, Ramires can press Leon Osman, arguably the most influential Everton player aside from the suspended Marouane "Zizou" Fellaini this season, off the ball, and also help out the defense against the combo of Baines and Pienaar down that side.

But there are also drawbacks in this plan. First, Chelsea will be putting their best attacking threat, Juan Mata, aside on the right wing. The Spaniard thrives in the center--as the link between the midfield and the attack--, not on the flanks. Second, the make-shift midfield man David Luiz is OKAY along side a capable partner, but he is definitely not good enough (yet?) to play as a lone holding midfielder with his back to the opposition goal and constant pressure from the energetic Everton players.

Combine these two major factors with playing a now rather unfamiliar shape meant that Benitez's team looked out of sort in the opening 25 minutes of the game. They were frantic in possession as Everton pressed, giving the ball away cheaply time and time again. The defensive organization that came with a more reserved 4-2-3-1 of the post-RDM era was also no where to be found. Everton poked all kinds of hole in the wide areas and the Chelsea midfielders were lost in the middle.

Credit must go to Benitez who changed his plans when he saw that they were working out very poorly for the team. After about 15 minutes of flirtation with 4-3-3, Chelsea switched back to the usual 4-2-3-1; Ramires went to right wing, leaving Lampard and Luiz to form the double pivot, and Mata moved back to the central position where he's most effective. It still took about another 10 to 15 minutes for the visitors to gain composure and begin to dominate the game. From that point on, they attacked with purpose and defended with good organization. Happily ever after and so on. 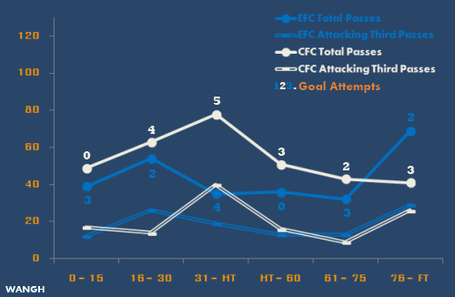 A quick look at the Passing Timeline shows you the pattern of this game. David Moyes' side had the upper hand in the opening 30 minutes; they out-passed Chelsea in the final third (38 to 24) and also registered more goal attempts (5 to 4), scoring once and smashing the frame of the goal twice! The table turned after that as the away side played their best passing game from the 30th minute to the halftime whistle. They managed to equalize via a decisive Lampard header during this period.

The away side began the second half much better than they did the first, and took the lead in the 72nd minute. Everton pushed foward after that, and Chelsea were happy to stay compact and play on the counter. Now let's look at some aspects of the game in more detail. 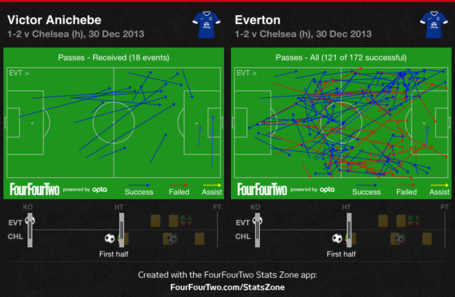 As expected, the home side built their attack mainly down the left through out the game. It wasn't just that Pienaar and Baines are combing superbly on the flank with the help of Osman, positioned left of center, but up front, Victor Anichebe, especially in the first half, was moving into that space as well to overload the Chelsea defense. The striker received a lot of long passes on that side and also made runs into the box when the occasional attack came down their right, which coincidentally was how Everton created two of their great chances in the first half. Ashley Cole and Eden Hazard were culpable as dangerous crosses from Jagielka and Naismith caused havoc to Chelsea's defense, one of which leading to the Steven Pienaar goal after Anichebe had headed the ball against the post.

Everton's attacking focus down their left meant that there was space on that side for Ramires to run onto with speed and the Brazilian did just that. The most common Chelsea attacking pattern in the first half goes like this. Ramires brings out the ball, not way out on the flank but through the channel between Baines and Osman. As the Brazilian approaches the Everton box, Torres makes a diagonal run to the right, dragging Distin along with him. This opens up the space for Ramires and Mata to exploit centrally while Hazard joins the action from the left. Both Mata and Ramires had chances through this buildup. The Lampard header came after an offensive corner was cleared, but the buildup involved the combination between Torres and Ramires on the right side.

The movement off the ball from Fernando Torres was key, but aside from that the Spaniard had another forgettable performance as his first touch and decision making let him down. The worst example came in the second half when he squandered the chance to put the game to rest from a 3v1 counter attack with Moses and Oscar. 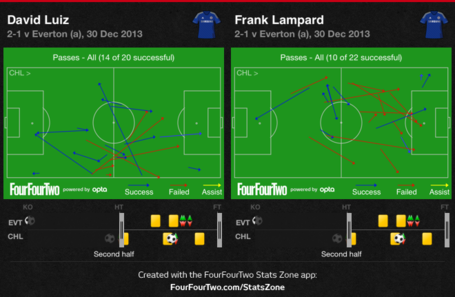 Chelsea's passing in midfield was poor in the first half but it was even worse after the break. David Luiz and Lampard combined completed 24 passes in the second half from 44 attempts (54.5% accuracy). In comparison, Leon Osman alone completed 31 from 33 attempts (93.9% accuracy) in that same period. Part of the reason is the nature of the passes attempted/made. Oscar's passes were shorter and less direct while both of David Luiz and Lampard were longer and more direct. It is perfectly reasonable to one of the Chelsea central midfielders to make long delivery and get the ball out quick. But it is pretty rotten when both are doing it. A midfielder who can make calm, short distribution will compliment either one of these two.

There were good reasons to line up in a 4-3-3 in this game but it didn't work. Switching back to a familiar system in 4-2-3-1 and regaining of composure about 25 minutes into the game allowed Chelsea to mount a comeback. Everton attacked down their left, but they were also more vulnerable on that side. Frank Lampard would undoubted get all the attention because of the vital goals and his contract saga, but Juan Mata makes this team tick. The Spaniard was involved in almost all of Chelsea's good chances and was a goal threat. His ability to operate in that pocket of space behind the striker and combine breathtakingly at times with Eden Hazard were crucial to Chelsea's game.

Everton vs. Chelsea: Blues close 2012 with a win