Mata's talent sublimely capped off a buildup that was going nowhere.

Chelsea secured a Boxing Day victory against Norwich City with a decisive goal from Juan Mata. Although the finish was of top quality, the buildup that led to that spectacular shot was, well, less than spectacular*. Let's break it down and see what went right and what went wrong in this particular attack.

* Something about hanging out with my young nieces during this holiday may have caused some degeneration to my vocabulary. Taking pictures wearing fake mustaches definitely didn't help. 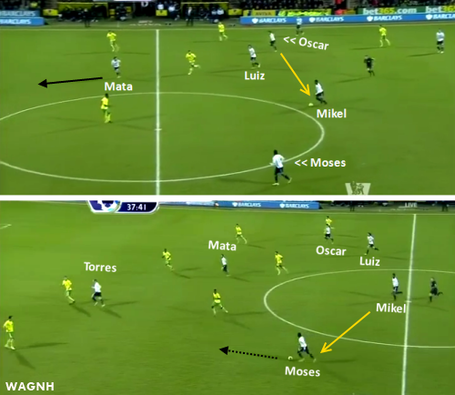 Chelsea's attack began after Oscar intercepted a pass down the right, breaking up Norwich's advances. It wasn't a tough interception since it was passed almost right into his feet, but it was still an important intervention. The Brazilian squared the ball to John Obi Mikel in the middle. Mikel quickly moved the ball on to Victor Moses on the right, and the attack was in full gear.

This was a typical attacking 4-2-3-1 shape: Fernando Torres, the center forward, led the line with Mata a few yards behind; Moses and Oscar, the two wingers, rushed down the flanks; David Luiz and Mikel, the two central midfielders, followed up the field in support.

Norwich had seven players retreating to deal with the six Chelsea players coming forward, and they had a decent defensive shape. Their back four ready to handle Torres and Mata; Alexander Tettey and Bradley Johnson positioned centrally; Anthony Pilkinton racing back to cover Oscar. Interested to see what happens next? You have no choice! (You actually do, but don't act on it.) (Please.) 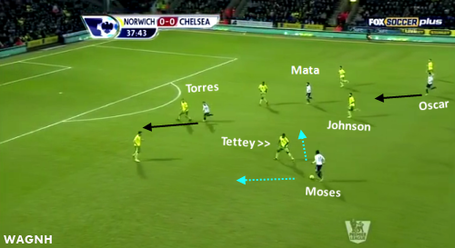 Moses started the move from the center-left position and continued down the channel toward Tettey. While the Nigerian indulged in a series of step-overs, he had two paths ahead of him: either dribble to the left flank where there was some space or cut inside to the center. At this point, Torres made a diagonal run to the left, which, I think, forced Moses to go toward the center rather than the left side.

This wouldn't have led to so much congestion in the middle if Oscar stayed wide and Mata kept pushing ahead. But the Brazilian ran to the center while the Spaniard checked his ran, thus all three of Chelsea's attacking midfielders crowded in the middle. 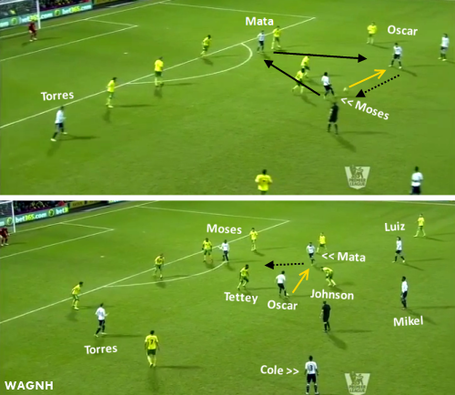 Here's the interesting part of this attack. Both Mikel and Luiz came forward but didn't make runs into the advance areas to stretch the Norwich defense. Ashley Cole arrived late on the left and stayed deep. The right back Cesar Azpilicueta was no where to be seen. So with Torres out of the picture on the left, it was all down to Oscar, Moses and Mata make things happen from the crowded area in front of the Norwich box.

The fluidity of movement from these three players would create a bit of space for Mata to exploit. Moses passed to Oscar and quickly ran forward; Oscar dribbled across to where Moses was and along the way managed to slip past a challenge from Johnson; Mata then dropped back to the space Oscar had just left to receive a return pass from Oscar. A "triangular rotation"* if you will. They did the best they could here, but this was not a clear cut chance. Only a slow reaction from Norwich defense allowed Mata to shoot from 20 yards out. BOOM!

*Yes, I'm making up for my depleting lexicon by simply creating new terms.

Andre Villas-Boas (I apologize for bringing him up.) once said in a long, tactically-oriented, interview that "ultimately it is the players' talent that solves the match situations." He is right. (Again, I'm sorry.) The game is unpredictable. There are so many variables at play in a single attacking or defensive play. You can't control everything. And sometimes, a skillful pass or a delightful strike can make the difference.

Mata's shot was hit perfectly with the right ratio of speed and placement. Mark Bunn, the Norwich keeper, didn't stand a chance. Just like that, a goal was scored from a buildup that wasn't going anywhere fast.