On the David Luiz midfield project

Share All sharing options for: On the David Luiz midfield project

It's difficult to think of any topic that sees me standing further from the football media orthodoxy than that of David Luiz. Over the past two games, he's been praised heavily by the powers that be for his displays in midfield against Aston Villa and Norwich City, matches that Chelsea won by the combined score of 9-0. Said games marked the Brazilian's first Premier League appearances as a midfielder, and he's been praised non-stop by the papers for a pair of great displays.

Said praise comes with a rather amusing back-handed compliment as pundits are falling all over themselves congratulating Rafa Benitez for moving David Luiz out of defence. Here's a sample from the Mail:

[David Luiz] has been a revelation, easing the problems in a position where Chelsea were short of cover and providing an element of unpredictability in attack. As if by magic, the defence also seems tighter.

As if by magic, the defence seems tighter. Against Aston Villa and Norwich. Note that the meltdown at Upton Park, Chelsea's major defensive failing under the new manager, did not feature David Luiz in any way, shape or form and was primarily the result of the midfield getting absolutely pulped by Mohamed Diame -- not that we should really expect the tabloid writers to connect defending to anything other than the back four.

David Luiz has definitely had his moments in the past two games. His free kick against Villa* was stunning, he played some great passes against Norwich and there's been some fascinating positional interchanges with John Obi Mikel in particular that nobody else would be capable of pulling off.

*And seriously, it's not as though defenders are physically incapable of taking free kicks.

But with 90 minutes under his belt in both the defensive 'Mikel' role as well as a more attacking one against Norwich, can we say that he's actually been playing well in the centre of the pitch? I have my doubts.

The fundamental issue with David Luiz's game is that he gives the ball away in compromising positions too often. Yeah, there are the genuine defensive errors (think Shane Long's goal at the Hawthorns), but mostly it's a matter of taking unnecessary risks with the ball and losing it.

And that's something that hasn't changed since he moved to midfield. Consider the following 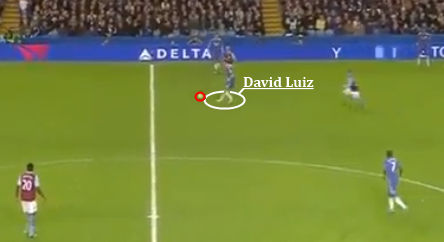 This is David Luiz picking up a simple pass in midfield, with a man in space to for a quick move and romp upfield. But instead of taking the easy option, the Brazilian -- with his back turned towards the goal and away from any Villa runners -- takes one, two touches and finds himself dispossessed in his own half by Stephen Ireland, leading to the only chance of any significance on Petr Cech's goal in the past 180 minutes of football. Cech tipped Andreas Weimann's shot onto the crossbar, because he is awesome.

Giving the ball away as a centre back is obviously catastrophic, but doing so as a defensive midfielder isn't much better. Ideally, you don't want to cough up possession at all, but David Luiz's position in midfield requires a great deal of care as well, and also comes with far more pressure.

One of the reasons David Luiz is perfectly serviceable at centre back is that he's rarely put under a significant amount of pressure. Most teams will not press Chelsea's defenders particularly hard, because doing so means they'll be drawn up the pitch and disrupt their own defensive shape, which is suicidal against Eden Hazard and Juan Mata.

That's not true in midfield, which is where teams will usually set their pressing trigger against the Blues. David Luiz is going to be attacked far more often when he plays higher up the pitch, and that means his bad habit of playing a sloppy pass or having the ball taken off his feet is going to come into play more often. Yes, a mistake in midfield is less catastrophic than one as a centre back, but David Luiz is now in a position to make many more mistakes than he would have as a defender.

In his 180 minutes as a Premier League midfielder, let's take a look at David Luiz's passing maps: 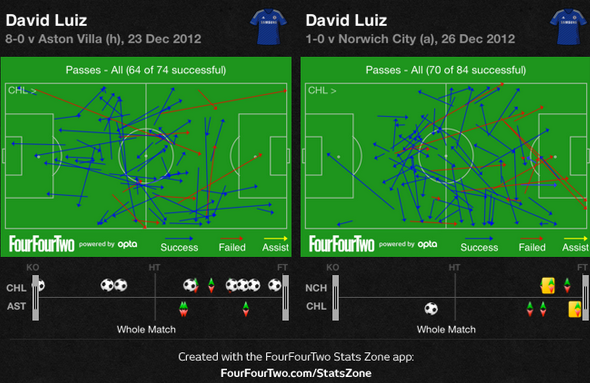 The missed long passes are acceptable, but an intercepted short pass in midfield -- of which there are five in the maps above -- enables the opposition to break at speed at a suddenly exposed Chelsea back line. It's absolutely imperative that David Luiz tone down his risk taking in the defensive and central zones, and until he does he's going to be exposed against sides that can actually hurt the Blues.

David Luiz has not been particularly good in midfield just yet. It's a promising experiment, and he certainly has the talent to succeed in a more advanced position (and his ability to read the game shows up even more strongly when he's in the pivot), but the fundamental flaw in his play has yet to be addressed, and unless the coaching staff does something about it we're going to see some ugly play.

Granted, putting a player with excellent technical skills in a situation where he'll be put under a great deal of pressure to retain the ball might very well lead to him making an adjustment towards a less insane style of play. That may well be what Benitez is going for here, adding some temporary midfield cover while forcing David Luiz to make some fundamental adjustments about how he approaches football -- if so this could be a very profitable experiment.

But the fact remains that it is an experiment. David Luiz's best moment as a midfielder has had nothing to do with his position, and in a straight-up comparison between him, Frank Lampard and John Obi Mikel, the other two players we've seen in the pivot over the past two matches, my feeling is that he'd finish third, with little more than a passing grade*.

*That said, he's already better there than Ramires, offering more defensively and making contributions to the attack that don't rely entirely on running at the opposition.

Could he be a very good midfielder someday? Surely. But he's not anywhere near there at the moment, despite the narrative we're being bombarded with. Let's not get carried away just yet.