Share All sharing options for: Analyzing the Torres Goal vs Aston Villa

Aston Villa arrived at Stamford Bridge without a defeat in their last 6 games, including 0-0 home draw with Arsenal and 1-3 away victory over Liverpool. However, Paul Lambert's team were ripped to shreds as the Blues marched on to a decisive 8-0 victory.

The 3rd minute opening goal from (the resurgent?) Fernando Torres set the tone for the game. It calmed the team down and opened the game up as Villa needed to attack, which meant more quick, direct counter-attacking opportunities for Chelsea. Let's take a look at how this goal came about the who played important roles in the buildup. 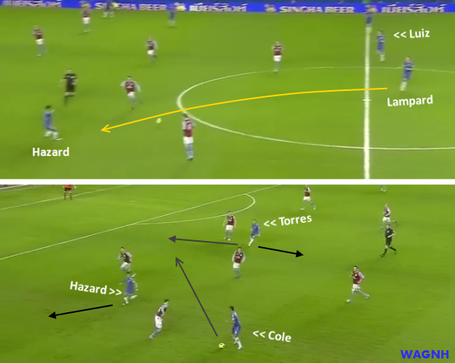 The move began after Chelsea defended a Villa attack down Chelsea's right. Cesar Azpilicueta brought the ball up to the halfway line before squaring to David Luiz who, then, found his midfield partner Frank Lampard. The midfielder had space in front of him, but opted to pass forward to Eden Hazard who had dropped back on the left. The ball would then end up with Ashley Cole as Hazard slipped a quick pass before making a diagonal run to the left wing.

This run pulled away Chris Herd, one of the three Villa center-backs, to the wide area, opening up a passing lane for Cole (gray arrow) if Torres were to make a dash across (gray arrow) his marker, Ciaran Clark. Torres could have been through and face Brad Guzan one-on-one. But neither Torres nor Cole were aware of this opportunity: the striker dropped back into the space between the Villa lines (black arrow), and Cole had to retreat with a back pass to Lampard. Time to rethink the attack. 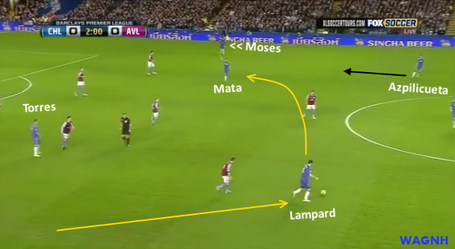 It was Lampard who started the attack with a pass to the left; now he had to make a switch to the right in order to change the direction of the attack. Here Lampard could play it safe and pass it back to David Luiz who was inside the center circle, but that would mean the attack would be slower. One extra pass that goes nowhere and extra time for Villa defense to get back in shape. The midfielder would instead find Juan Mata, positioned in front of the Villa defense, with a lob pass and the directness of Chelsea attack continued.

While Victor Moses provided width on the far right, Azpilicueta would join the attack and receive a pass from Mata. Let's zoom out and view the lay of the land. 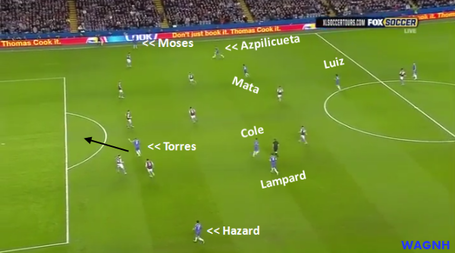 The attacking shape as Azpilicueta thought about a cross into the box resembled more of a 4-3-3 format than a 4-2-3-1. Moses and Hazard out wide with Torres spear-heading the attack. In midfield, the more advanced Mata and Lampard anchored by David Luiz formed an inverted triangle. (In a 4-2-3-1 attacking shape, Mata would be much closer to Torres.)

But that's just a side note. What's important here is that Torres was totally isolated with three Villa players surrounding him. It didn't matter though; he would signal Azpilicueta for a cross and make a run into Villa box through the Villa defenders. His vision was good, his movement was perfect (i.e. no offside). And Azpilicueta's cross would compliment everything that Torres was doing right.

Torres was dashing toward the penalty spot, but he would quickly cut his run to get to the ball ahead of Clark. And from 15 yards out, the striker rose high to guide a powerful header into the net. Just like that, almost out of nowhere, Chelsea were one goal up.

Even with a return of his goal-scoring form, some rightly question whether Torres can score meaningful goals. This was an important goal (as any opening goals are) and Torres deserves all the credits. We should also note the importance of Lampard's midfield play in the buildup. Can we have more of these, Fernando?

Chelsea vs. Aston Villa: Blues give Villa a thrashing