Aston Villa have been showing signs of adapting to Paul Lambert's methods in recent weeks, but the surprise 3-1 victory over Liverpool has cast their form firmly into the public limelight.

That win was due in part to a recent formation switch from Lambert - after weeks of experimentation with 4-4-2, 4-1-2-1-2 and 4-5-1, he's now settled on a more unorthodox 3-5-2, featuring an unusual (in the Premier League, at least) three-man defence.

Chris Herd, Ciaran Clark and Nathan Baker made up a young defence with an average age of 22 (in fact, Brett Holman is the oldest regular starter at the age of 28), but they have formed an impressive unit, benefitting from the cover of an extra centre-back. Villa's defensive record has improved significantly since the switch - they've conceded three goals in their past five games.

Against Liverpool, the outside defenders were particularly keen to move forward quickly to intercept passes, while all three are also comfortable moving out into the channels to support the wing-backs. 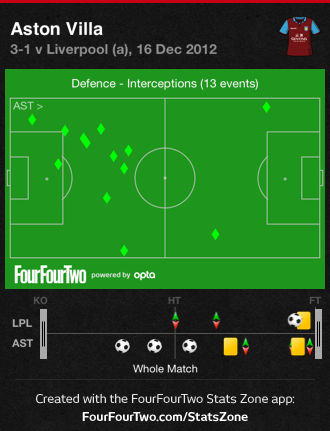 Their role is to supply width high up the pitch. Villa's early struggles were in part attributable to a lack of width, and the onus on the full-backs to get forward was sorely exposed when Southampton's four goals came from counter-attacks down the flanks. Now, with the cover of three central defenders, Eirc Lichaj and Matthew Lowton have more freedom to get forward, with the latter in particular enjoying a fine run of form.

Wigan are the only other side to use a three-man defence in the Premier League and Lambert has clearly taken inspiration from Roberto Martinez's side, as Villa's ability to collapse into a five-man defence bears the hallmarks of what made the Latics so successful at the tail end of last season.

That inevitably leaves space for opposition full-backs to get forward, and Glen Johnson and Stewart Downing recorded the most passes of any player last week. Therefore, Chelsea will likely dominate possession and push Cesar Azpilicueta and Ashley Cole high up the pitch, pinning the Villa full-backs deep inside their own half.

The away side's width will instead come from an unnatural source. Andreas Weimann and Christian Benteke will drift to the right and left respectively from central striking positions, with Brett Holman breaking through the middle in support. The Belgian striker has been hugely impressive in recent weeks - he's a more well-rounded player than Darren Bent, and is an obvious target for long balls with his supreme physical strength. 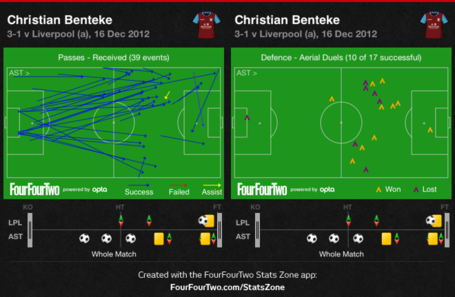 Villa aren't purely a direct side, however, as the central midfield partnership features two fine deep-lying paasers. Barry Bannan and Ashley Westwood both distribute the ball calmly from flank to flank, although the former sometimes attempts ambitious, Hollywood style passes towards the runs of Weimann. 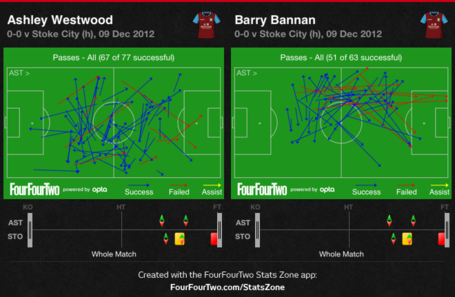 Chelsea vs. Aston Villa: Blues give Villa a thrashing