The initial mistake from David Luiz is made worse by poor transitional defending.

Share All sharing options for: Analyzing the Becchio Goal

The encounter with Leeds United in the Capital One Cup turned out to be an easy victory for Chelsea at the end, but it didn't look that way in the first half. Despite dominating from the start, the Blues fell behind to Leeds via a counter attacking goal.

David Luiz played a huge role in that particular set back. However, a couple of his teammates also didn't help the cause of rectifying the Brazilians initial error. Let's break this goal down. 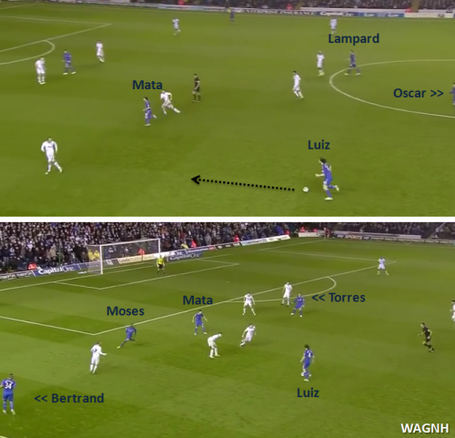 The move began with Chelsea's defensive line circulating the ball around the halfway line as Leeds set back with all their players behind the ball. David Luiz got the pass from Oscar on the left side. Occupied with the forward running Bertrand, Moses and Mata, Leeds retreated deep into their own half, allowing Luiz to dribble into space.

Here, there is no problem with David Luiz venturing forward: he had the space to go forward and Oscar stayed behind as cover. Of course, Oscar's ability to be a defensive cover is another question, but it is perfectly fine for the center-back to go forward, with one of the central midfielders covering, when given the opportunity. In other words, Luiz's forward adventure here in and of itself was not blameworthy.

But his execution was. Luiz had four options: Bertrand on his left and Torres on his right provided relatively safer options while Moses and Mata, ahead of him, presented high risk, high reward options. The Brazilian, somewhat unsurprisingly, chose the latter, high risk/reward option, and attempted a chip toward Moses/Mata, which was headed away. Michael Tonge picked up the loose ball and Leeds counter attack was on. 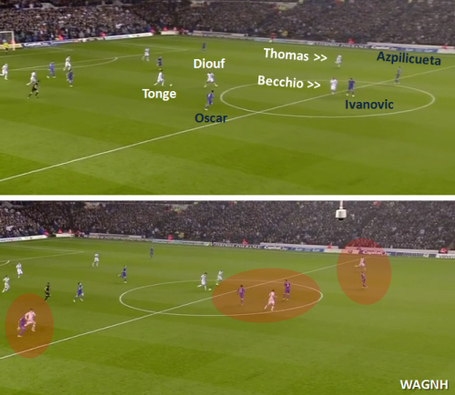 As Tonge carried the ball forward, four Chelsea players prepared to defend five Leeds attackers. In the central zone, Tonge, El-Hadji Diouf and the goal scorer Luciano Becchio outnumbered Oscar and Branislav Ivanovic 3 to 2. To be sure, this was a real crappy (it's a highly technical term) position for Oscar and Ivanovic to be in: the best they can do at this point is to stall the counter just enough for reinforcement to arrive (i.e. keep the eye on the ball and retreat).

But they made Leeds' job pretty easy by getting drawn toward the ball at the same time as Becchio, who was initially marked by Ivanovic, slipped behind the defense. There was no reason for the both of them to be stepping toward the ball since Becchio couldn't shoot from that distance. Oscar has the excuse of being an attacking midfielder being asked to play an unfamiliar role, but Ivanovic should know, and have done, better.

Cesar Azpilicueta on the right stayed slightly central while Jerome Thomas joined the attack down the flank. Considering the 3 v 2 situation near the center circle, it was reasonable for Azpilicueta to stay close to Ivanovic for as long as he could, but it also put him in disadvantage when trying to catch up with the speedy Thomas, who took off after receiving the pass from Tonge.

Ryan Bertrand, meanwhile, tracked the run of Samuel Bryam down the left flank. The young left-back, as it turned out, will be the only bright spot from this defensive disaster as he sprint back from his advance position on the left wing to cover Bryam all the way back to the Chelsea box. 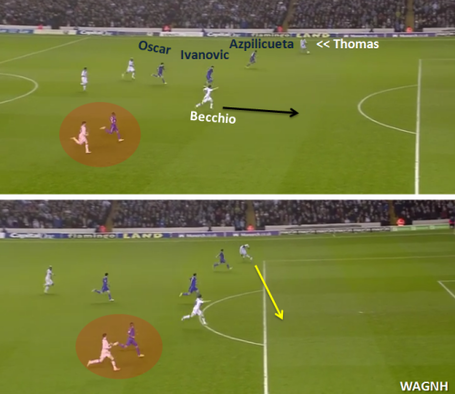 The real damage has been done at this point. Azpilicueta, who had a woeful performance at right-back (jet-leg could be the reason), lost out to Thomas yet again. The Leeds winger crossed with the outside of his right foot and Becchio scored with a fine finish.

It has been said that defensive organization has returned to Chelsea under Rafa Benitez, but this goal suggests that there is still work to be done, especially in transitions. It is not unusual to lose the ball in the advance attacking position as David Luiz did, but Chelsea will need to do better with dealing with quick counter-attacks. This goal also showed the risk of playing a Lampard-Oscar double pivot since they provided very little defensive cover. Lampard, as you might have noticed, was totally absent as Chelsea scrambled to contain this counter attack; the midfielder had gone forward but couldn't get back to defend. This won't be the last time Chelsea have to break down a team with defensive intentions and they can't afford to be susceptible on the break like this.