On Falcao, Fernando Torres, and scoring against weak opponents

I decided to take a closer look at who Fernando Torres has been scoring against, and compare him to Radamel Falcao.

Share All sharing options for: On Falcao, Fernando Torres, and scoring against weak opponents

Fernando Torres has been scoring of late, but many Chelsea fans are quick to point out that Torres typically only scores against weaker opposition. That certainly seemed like a reasonable assertion to me, but I didn't want to fully buy this idea without first doing a bit of digging. With that in mind, you can find the date, opponent, and league finish of every team Torres has scored against in his Chelsea FC career below: 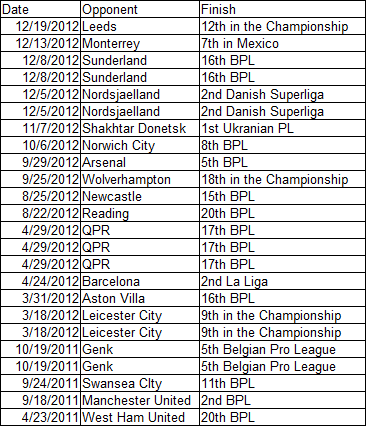 Two caveats should be mentioned with this. First, I did not include any friendlies in these totals. The Community Shield goal against City is therefore out. Secondly, for this season I've used the teams' position in their respective tables at the time of this writing as their "finish". That can obviously change in the next six months, but it's what we'll go with for now. Any past seasons used the results of the final table. These two caveats will be the same for the rest of this article, but I'm not going to mention them again.

From the looks of things, the perception that Torres doesn't score against better quality opposition does appear to be accurate. He's got a few nice opponents on that list, but those that remember the goals against Shakhtar or Barcelona probably weren't all that impressed with his work in the buildup, leaving only a pair of goals on that list against any sort of top quality opposition.

With that in mind, I decided to go back a bit and see if this was drastically different than his time at Liverpool. I compiled the same data for the last season and a half that he was at Liverpool, complete with finishing position again. Without further ado: 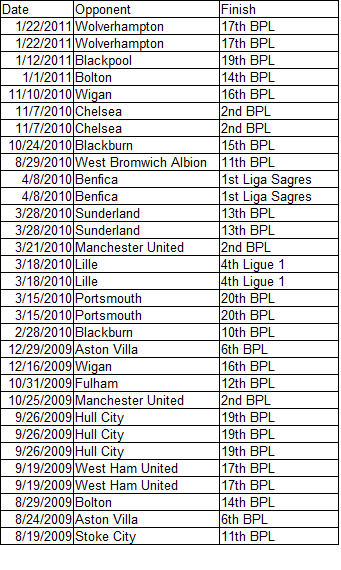 As you can see, not too much has changed since Torres joined Chelsea. He was banging in more goals at Liverpool, but he was still doing the majority of his damage against the weaker teams he faced. There were clear signs of decline that should have warned Chelsea about the risks of dropping 50 million on him, warnings that obviously didn't stop the move.

The January window is approaching, and Chelsea are again rumored to be considering spending a jaw-dropping amount of money for a center forward. Comparisons between Radamel Falcao and Fernando Torres are inevitable, so here is what Falcao has done since joining Atletico Madrid:

The first thing worth noting is that this list is a lot longer. Falcao has scored 55 goals since joining Atletico in August of 2011, the same number that Torres has totaled since the beginning of the 2009-10 season. He's scored at about double the rate of Torres did in his last 18 months at Liverpool, and the quality of competition has been fairly similar.

The second thing to note here is that Falcao has found the back of the net against quite a few fairly decent teams. He's certainly been a nightmare for the La Liga minnows, but he's found the back of the net against some of the better teams Atletico have played as well. The sheer number of goals he's scored over the last 18 months masks that a bit, but he's done a nice job against stronger opposition.

I'm still not entirely comfortable with the idea of triggering Radamel Falcao's release clause, but my concerns have nothing at all to do with worries that he'd fail to deliver in the Premier League. He's one of the best players in the game at the moment, and any comparison to pre-Chelsea Fernando Torres based on performance is simply unfair. Falcao pads his impressive resume against weaker opposition, while Torres just doesn't score against anyone else.