Starting with the infamous 3-0 defeat to Juventus in the Champions League and ending with the long-awaited victory away to Sunderland this Saturday, here follows the latest update to your community player ratings.

It's been almost a month since we've taken a look at your community player ratings. And what a month it has been! Although not exactly one to be remembered for on the pitch events. Because those have been mostly uninspiring.

In the six matches since the defeat away to West Bromwich Albion, Chelsea have drawn twice (both 0-0), lost twice (conceded three each time), and won twice (scoring a combined nine goals). Now that the team has jetted off to Japan, one can only wonder which of those three faces will be on display at the Club World Cup. 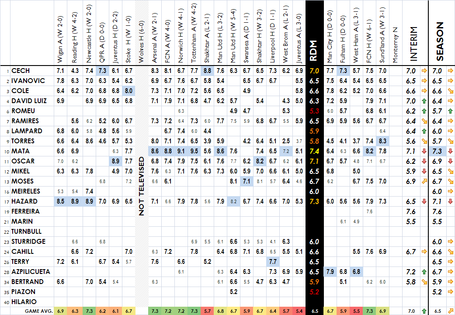 Things are getting harder to see, so click to make it bigger. I've added a couple new indicators: the first sums up Di Matteo's portion of the season and the second (sum/arrow) allows for easy comparison of the player ratings under the two different managers. The season column still looks at the whole season, with the associated arrows tracking the change since the last community ratings round-up.

Despite Juan Mata's dip in form, he's still your overall leader - unless we're counting Paulo Ferreira emerging from hibernation to post a generous 7.6 versus Norsejellybelly. Eden Hazard and Petr Cech remain at or above a 7.0 rating as well.

At the other end of the scale, we still find Ryan Bertrand, Oriol Romeu, and Fernando Torres, although the latter two have been showing signs of life. Unfortunately young Oriol is now done for the season with the knee injury. And kudos to Torres for managing to finally garner the highest player rating for a match - even though it was only his second highest rated performance of the season. Hopefully the 5-match run at a 3.7 clip is now a thing of the past and better days await.

David Luiz, Oriol Romeu, and Cesar Azpilicueta have shown the biggest ratings improvement under the new manager, with young Cesar garnering two highest votes even in his three appearances. Opposite them stands the trio who has suffered the most in the new regime: Oscar, Eden Hazard, and John Obi Mikel. All three will surely have a chance to pad their ratings in the upcoming stretch of easier matches.