Is it time to release the Kraken? A statistical comparison of Romelu Lukaku and Fernando Torres.

In the past several weeks, the question has been asked about recalling Romelu Lukaku in January. I would, and I'm going to look at some statistics that make my reasons very clear.

Share All sharing options for: Is it time to release the Kraken? A statistical comparison of Romelu Lukaku and Fernando Torres.

One of the popular discussions here of late has been Chelsea's need to buy a center forward to replace Fernando Torres in January. We've also been hearing about Chelsea's option to recall top prospect Romelu Lukaku, who has been impressing while on loan at West Bromwich Albion. Since there would be no transfer fee involved in the recall, I though it would be the avenue I'd explore first.

Lukaku was sent out on loan to gain valuable experience that will help him in his development. He's been a key member of Steve Clarke's West Brom side, and to date he's played a very respectable 382 minutes. That's excellent for a 19 year old center forward at this level, and the loan should only be interrupted if he's going to see similar time at Chelsea.

With that in mind, I've decided to compare Lukaku to Fernando Torres statistically, as it should be a good indicator if Lukaku would be able to do enough to take minutes from our current "center forward". For the purposes of this exercise, I decided to leave Daniel Sturridge out of the discussion. He just hasn't played enough minutes centrally for his statistics to really mean anything*, so we'll just have to wait until he plays more before adding him to this comparison.

*I don't have statistics that I'd trust for the Capital One Cup matches, making the usable sample even smaller. On that same note, I've excluded the UEFA Super Cup for Fernando Torres due to a lack of decent data.

I've taken both Lukaku and Torres and compared their statistics in a number of categories, the results of which can be seen below:

While you get a sense for the two players from this data, the total numbers are a bit misleading. Fernando Torres has played significantly more minutes than Lukaku to this point (1197 to 382), so raw numbers probably won't tell us the whole story. That discrepancy should really be taken into account, so I've taken each of those categories and determined how many minutes it's taking the two players to accumulate each statistic. Here are the outcomes when comparing each of these rates:

Now here is all of that data in graph form (yay graphs!): 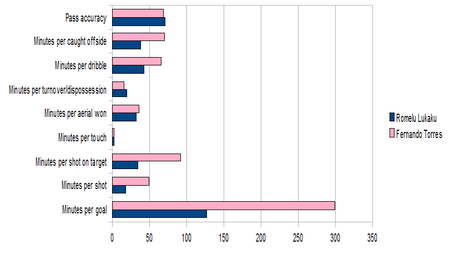 It's awfully hard to look at this data and see any reason why a sane human being would be playing Fernando Torres over Romelu Lukaku based on what they've been doing this season. I suppose if you really hate watching players get caught offside, then Torres is your man. Other than that, Romelu Lukaku is statistically superior to Fernando Torres in every single way I feel is worth considering.

Lukaku gets more touches, takes more shots, puts more on target and in the net, and loses the ball less. He does all of this while being better than Torres in the air and passing the ball more accurately. Tell me again why this is even a debate? Romelu Lukaku is a better player than Fernando Torres right now, and their statistics from this season prove it.