The judges have revealed their scores - your community player ratings

You have NO idea what I had to go through to get these numbers for you. Thousands of Bothans died.

Share All sharing options for: The judges have revealed their scores - your community player ratings

Most of you have been diligently rating the Chelsea players during your initial reactions to each match, but as of late, we have not been revealing the voting results to you. We could probably blame Graham for this, but then he'd just play the pity card and tell us about some random debilitating disease and make us feel all sorry for him and compel us to donate to yet another Emergency Graham Fund. So, let's just blame it on an FA conspiracy. I bet it was those dastardly referees and/or Sir Alex Ferguson again! Where's Scooby-Doo when you need him?!

Fortunately for you sorry bunch, as I was exploring the eerie attic of WAGNH Towers this weekend, I ran across a bin of dusty files. Needless to say, my curiosity was piqued. What could be inside, I wondered. Could it be the NOC List of Stephen's scouting network? Or the big red phone that Tim & Lamin use to tap into the collective braintrust of all the world's football tacticians? Or the GPS tracker for Devin's whereabouts? Or maybe, just maybe, it would just be the giant glowing indescribable utopia that is the genius of Graham MacAree - i.e. the Jackpot.

Throwing caution to the wind and applying extreme powers of logic and maths ("guess-n-check"), I managed to deduce the 128-bit lock on the case. A swarm of angry black widow spiders jumped at me; a pride of hungry lions, led by Stamford, suddenly appeared out of thin air; narwhals were poking me in places untold... but I emerged with the prize!

Imagine my disappointment when it was just some stupid numbers. Oh well, here you go: 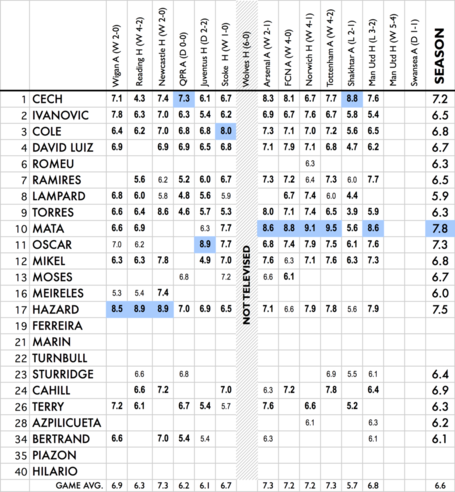 As you can see, the format is nowhere near as glorious as the usual presentation method, but the lions ate all that so we'll have to make do with this (click to make it bigger & readable, etc, etc). For now, the votes from the last two matches are missing as well - one of those is still somewhat active (Swansea away), the other is still in the process of being solved by the Enigma machines. Look for an update once they are done.

So... Juan Mata, Eden Hazard, Oscar, and Petr Cech are awesome. Frank Lampard, John Terry, Fernando Torres... well, not so much. Ramires's markedly better play since moving back into the midfield can clearly be seen. The community at large has been most displeased with the Juventus home draw - although that may change once the Swansea away draw results are tallied.

If this was Dancing with the Stars, Frank Lampard would be going home: 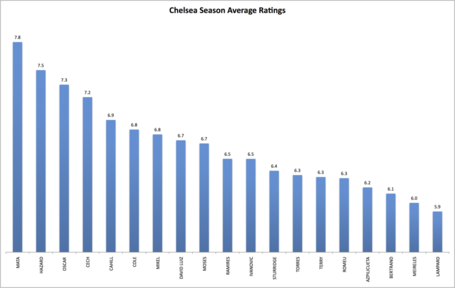