Chelsea play a 4-2-3-1; so do Swansea City. Tactically, then, this wasn't a particularly interesting match. The theory says that the free players will both be in the middle -- the centre forward is being marked by two defenders and can therefore only cover one in return, and the 2-1 midfield triangle means that one of the pivot players will be free on both sides. Everyone else is more or less picked up by a direct opponent.

Theory doesn't quite work with Roberto di Matteo's typical implementation of the 4-2-3-1 these days thanks to the presence of Eden Hazard, Oscar and Juan Mata, who tend to bend the formation into a much more fluid one. But without Mata, Chelsea turned to Victor Moses, a much more traditional winger, which tipped the balance back towards the typical match between these two shapes: 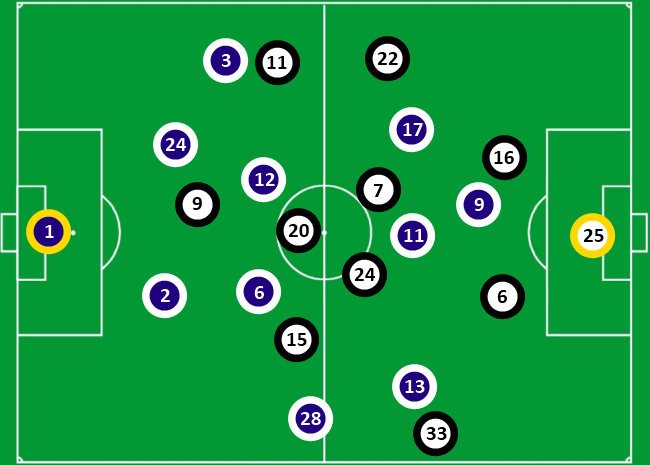 The key in this sort of situation, apart from one-on-one matchups which aren't really tactical in nature (e.g. Hazard against Angel Rangel is a battle that you'd expect to be a positive for Chelsea, but it's not one that you'd credit di Matteo for), is using those spare players to positively influence the match. The problem here is that neither Frank Lampard nor David Luiz, the club's best distributors in the pivot and at centre back respectively, were available for the match -- di Matteo used a pivot of John Obi Mikel and Oriol Romeu and an odd defensive line featuring Ashley Cole, Gary Cahill, Branislav Ivanovic and Cesar Azpilicueta.

Without quick, effective distribution to the wide players in Moses and Hazard, and with Oscar seemingly reluctant to drop back into the midfield zone, in order to create, there was a huge gap between Chelsea's attackers and the defence -- a typical 6-4 broken team. The fullbacks helped out, but Ashley Cole was pinned back by Rangel and Pablo Hernandez, leaving the right side of Azpilicueta and Moses as the only real attacking outlet.

Matters weren't helped by Fernando Torres, who spent too much of his time dropping deep and nowhere near enough getting in good positions. His biggest contribution came early, when his header form a corner was cleared off the line by Leon Britton. In fact, set pieces were the only way it looked as though Chelsea would score -- they ended up with fewer than half of their shot attempts from open play at the end of the match:

Seeking a better link between defence and attack, di Matteo withdrew the disappointing Romeu at halftime, adding Ramires to the mix. The idea was that the Brazilian's surging runs forward would help out on the attack, but he was fairly muted, touching the ball just 24 times in his 45-plus minutes on the pitch. 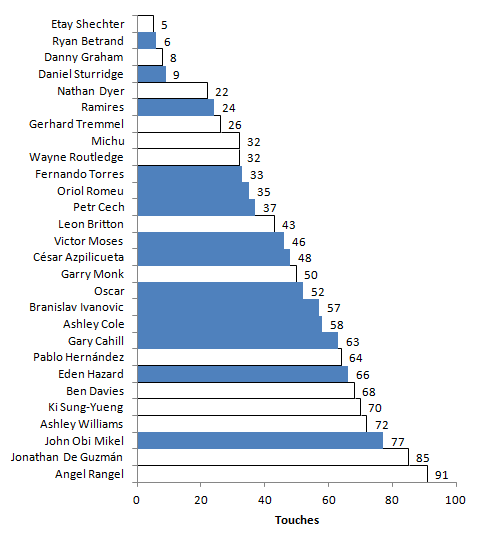 However, the set piece threat was still there, and Chelsea took the lead when Moses deflected a Cahill header off the post and in in the 61st minute, the corner having been won from an Eden Hazard free kick. A goal should have been enough to see off Swansea, who had been sitting extremely deep and hoping to simply absorb the Blues' attempts at Gerhard Tremmel's net.

Obviously, it wasn't -- the match finished 1-1. Di Matteo's response to going ahead was strange. First, he looked to kill off the game, introducing Danny Sturridge for Moses in the 73rd minute, a switch that came after Michael Laudrup had taken Swansea out of their shell and moved into a 4-4-2 shape. Chelsea were already under pressure by this point and Sturridge's pace should have been able to give the Blues more power on the counterattack.

It didn't really work because the Blues were stuck in their own half for most of the final twenty minutes as an old friend returned. One of the hallmarks of Chelsea under Andre Villas-Boas was their almost profound inability to escape from sustained pressure, and even di Matteo's reign as manager has been marked on occasion by similar issues (the FA Cup final against Liverpool, for example).

And that's exactly what happened here. Although Chelsea won the ball off Swansea frequently, they would repeatedly lose possession attempting to push forward out of defence, and that meant that Petr Cech's goal was essentially under siege for much of the close of the game. The substitution of Ryan Bertrand for Oscar hurt more than helped, as Oscar was providing an invaluable defensive contribution in the centre. That said, the reasoning for introducing Bertrand was sound -- take a look at Swansea's attacking pattern through the match: 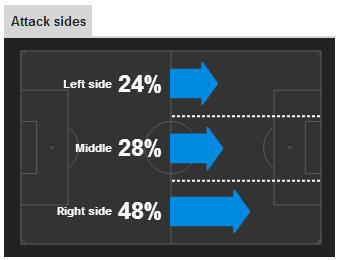 The hosts specifically targetted the gap Hazard was leaving during his runs towards the centre and then ran at Ashley Cole, so di Matteo was looking to patch up that gap. However, Chelsea would probably have been better off pulling Hazard and switching Oscar to a deeper role to crowd out the centre, either using a Ramires-Mikel-Oscar 4-3-3 or pushing Ramires to the right side in a defensive 4-4-2.

The goal came annoyingly late. Here's where it started from:

That ought to strike you as a strange way of conceding. Ashley Cole has the ball for a throw-in on the halfway line, with Ramires as a free option to pass to and John Obi Mikel as an alternative. That this leads to a Swansea goal is pretty bizarre.

And here's how Swansea turn that into possession. Cole passes to Ramires, who gives the ball back to the defender. Nathan Dyer immediately presses the left back, who releases the ball into the area that would normally be occupied by the pivot midfielders. Except for the fact that both of them are pressed up against the touchline trying to provide a passing outlet. Which meant that Cole passes to empty space, which should have allowed Pablo Hernandez to break down the centre.

Except it doesn't. Hernandez isn't the one who reaches the ball -- instead, it's Danny Graham, dropping back from deep who recovers possession, which breaks up some of the Swansea momentum. He passes to Ki Sung-Yeung, who's left to drive forward while Chelsea's defence reforms: 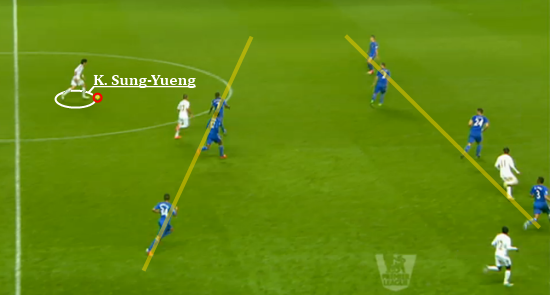 At this point, there's not too much of a problem. The back four have reformed, and both Ramires and Mikel are in position to defend. Daniel Sturridge is too high up the pitch because he's Daniel Sturridge, but Ryan Bertrand is already able to support the defence. It's a four-on-seven attack and not a major concern. 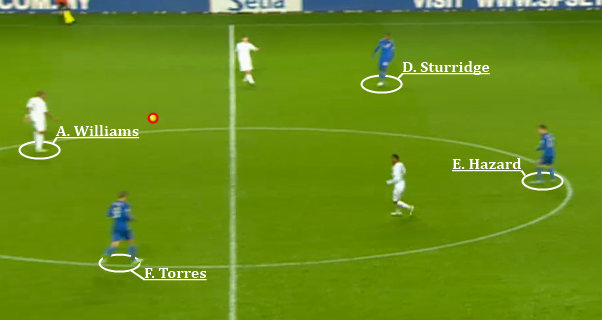 Indeed, Swansea have now been forced to reset the whole attack, meaning Cole's initial mistake is more or less wiped out. The ball is back with Gunnery Chief Ashley Williams, and the threat level is basically zero.

Oh wait. Williams spots a gap in Chelsea's defence and rifles a pass forward, finding Ki on the left side. Cesar Azpilicueta comes out to meet him immediately, but that leaves a gap for Hernandez to move into, with Ramires loosely tracking the winger. If Ki can find a way to get Hernandez the ball, there's a very good chance that Graham will be able to attack a dangerous cross. 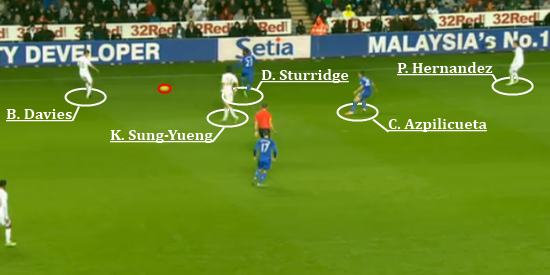 Fortunately Azpilicueta does his job, chasing Ki to safety and forcing the midfielder to give possession to left back Ben Davies. However, Sturridge, having tracked back, isn't really in a position to block off his passing lanes. And Ki's movement has pulled Azpilicueta out of his position at right back. It's now simple for Davies to find Hernandez, who hasn't been tracked by Ramires.

And still the situation is recoverable. Azpilicueta has compensated for his mistake, forcing Hernandez into a one-on-one with Ramires as backup. Normally, the worst thing that happens here is that the right back is beaten in the direction of the touchline and a cross comes in, which is a pretty acceptable outcome considering the aerial ability of both Branislav Ivanovic and Gary Cahill.

But that's not what happens.

Instead, Hernandez beats Azpilicueta and then ghosts past Ramires, feeding Etay Shechter in the Chelsea box. Azpilcueta chases after the substitute while Ramires and Mikel watch the ball. Shechter has nowhere to go, so one might expect the easy pass out wide. Nope

The ball goes back to Hernandez at the top of the box, with neither Mikel or Ramires covering correctly and therefore unable to close him down. Given time and space to shoot, Hernandez does just that, seriously putting a damper on our collective Saturday.

The goal started with an Ashley Cole mistake and featured some dicey defending on the right wing, but for my money the two pivot midfielders are primarily at fault -- Ramires didn't work as hard as he should have in tracking his man once Azpilicueta picked up Ki, and Mikel's completely lackadaisical approach to the one-two Hernandez played with Shechter ended up with the Nigerian marking essentially empty space. It was a strange goal featuring a series of mistakes, starting with a defender coughing up possession, and eventually Chelsea were made to play.

Had Hernandez not scored (we have now conceded goals to Hernandezes in three straight games; Shakhtar Donetsk will not extend that streak unless something very strange happens), the Blues would have been praised for a reasonable team performance in a difficult place to win. That would have been a mistake, however -- the attack was incoherent and decoupled from its midfield base, and despite the defence playing well they were unable to transition forward properly. Those two issues popping up mean that you generally don't win football matches. So it proved at the Liberty Stadium.