Good news everyone; Chelsea are almost top of the league!

The league of clean sheets, that is.

Share All sharing options for: Good news everyone; Chelsea are almost top of the league!

In a stunning turnaround, Chelsea have exploded up the table the past seven days. No one could've possibly predicted such an immediate and remarkable reversal of the club's fortunes. The buzz and the excitement surrounding Chelsea Football Club at the moment is almost too much to bear and many supporters, especially those of weak constitution, have opted to give up their match tickets for their own safety and sanity.

With Roberto Di Matteo's fun-loving whirl of goals-goals-goals consigned to the annals of history and with the new man in charge securing back-to-back clean sheets, a campaign that once seemed hopeless and lost has suddenly been revitalized. Leaving powerhouses like Norwich City & Stoke City in their dust, what once looked like an unassailable lead of zero by Manchester City (ALL THE CITIES!) has been systematically and without mercy whittled down to just zero. 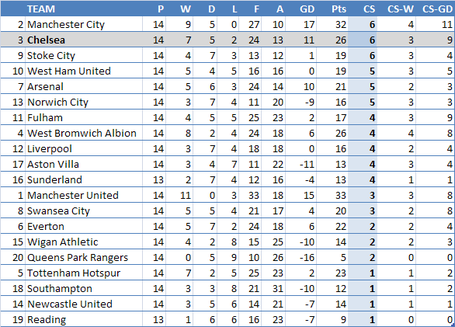 Feeling the pressure, City and England #1 Joe Hart was even spotted taking five extra hours of training after Sunday's match, while rumors are starting to... fly... about the Etihad that Roberto Mancini may soon be axed in favor of a less sartorial option who is more in tune with the priorities inherent in the modern game.

An inside source from Stamford Bridge revealed exclusively to WAGNH that the club was tired of Di Matteo pretending to be the Oprah of goals - handing them out to all comers, regardless of what color shirt they were wearing - and that they wanted to create a more Springer-like environment of constant booing and yelling and looking for someone's daddy.

When reached for comment on whether Chelsea can close the remaining gap and challenge for the title, the manager opined:

Why can't we? It's still a long way to go. We have to keep going. We'll have chances.

Remember last season when City were ahead and it was 'easy?' Then they needed [...] their last game.

It's a long, long competition.

That's the spirit, boss! WE'RE GOING TO WIN THE LEAGUE!