Chelsea saw a lot of the ball but failed to break down a stubborn Fulham defense.

Share All sharing options for: Chelsea vs. Fulham: Match analysis 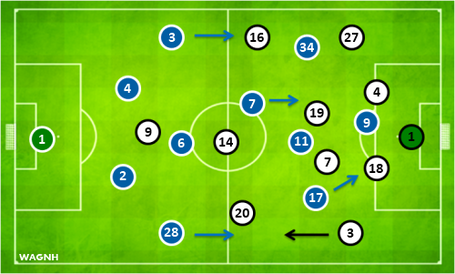 On paper, this was supposed to be a 4-2-3-1 derby, but the nature of the game—Chelsea attacking while Fulham playing on the break—dictated the shape of each team on the pitch. The away side sat deep with the two central midfielders, Sidwell and Diarra, very close to their back four, leaving a lot of space before the two rows of Fulham defensive lines and very little in between them.

This meant Ramires could break away from the double pivot to venture forward and Oscar had to drop back slightly to find breathing room. Result? A 4-3-3-ish shape for Chelsea: Oscar and Ramires as box-to-box midfielders ahead of Romeu who babysat the backline. On the other side, Karagounis retreated from his play-making position to do some play-breaking as part of a 5-men midfield to defend Chelsea’s attack for the most part. It was a surprise that Fulham were this defensive: they have been playing open and attacking football under Martin Jol (they came into this game as the second highest goal-scoring team in the league). I bet Benitez wasn’t expecting this either.

Off the ball, Chelsea withdrew into the usual 4-4-2/4-4-1-1 with Hazard, Romeu, Ramires and Bertrand shielding the back four. Although the Blues didn’t have to defend much, this transition between the attacking and defensive shape was made possible by Ramires’ boundless energy: the Brazilian covered a lot of ground and was present at the both ends. From an attacking perspective, Fulham were disappointing: they didn’t press hard without the ball and were sluggish with the ball. Berbatov, isolated up front, could do little against the Chelsea center-backs.

Overall, the two formations—attacking 4-3-3 vs defensive 4-5-1—fit each other like a glove. Neither team had an advantage over the other as the direct result of the team’s shape. Chelsea could score from slick buildup plays and Fulham from quick counter-attacks. At the end of the day, neither team did enough to get on the score sheet. 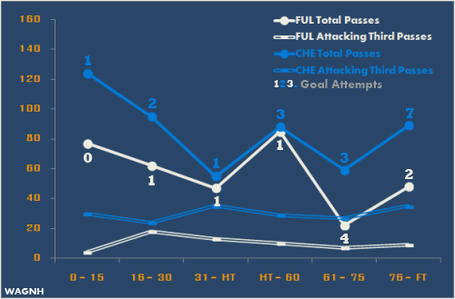 A quick look at the Passing Time line tells us what we already know about this game: Chelsea dominated Fulham in both total passes and in attacking third passes constantly throughout the game. The Blues’ total passes rose and fell in different periods of the game—dipping before halftime and after the hour mark—but they completed a steady number (about 30) of attacking third passes. In terms of goal attempts, Chelsea were much more productive in the second half (13 shots compared to 4 in the first half).

Fulham’s passing was better for the 15-minute period after the break (almost level with Chelsea at that point), but their attacking third passes were often in single digit. Yet, the away side was able to generate goal attempts in the second half from counter-attacks. 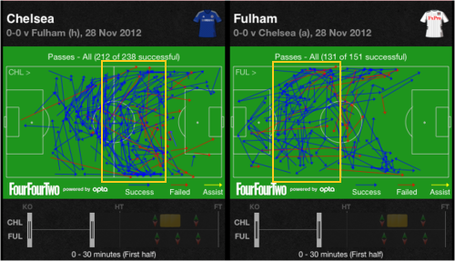 For the majority of the first half, football was being played in the area between the halfway line and Fulham's box. Chelsea saw most of the ball but Fulham managed to guard off the danger zone. If you look at the passing chart closely, the Blues only had two successful passes into Fulham's box in the first 30 minute of play, and those passes were made to the least dangerous areas of the box. At half time, Cole (28/30), Romeu (28/30), David Luiz (26/28), Ivanovic (25/26) and Oscar (20/24) were the top five passers of the game, meaning Chelsea's attack was going nowhere fast. So it was of little surprise that the home side ended the first half with only 4 goal attempts (one of which were a David Luiz free-kick and another a shot at the moon from Ramires) despite their dominance. 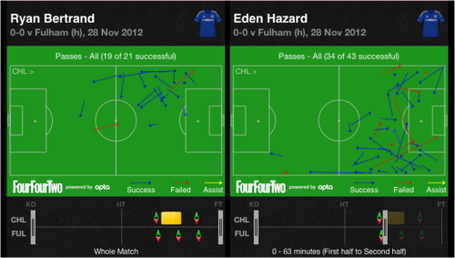 One of the talking point of this game was the selection of Ryan Bertrand on the left wing as Juan Mata sat on the bench. Benitez explained it was simply squad rotation: "We have too many games in a few days, so it was just a decision to use the squad." I think it is a reasonable decision but the attack suffered because of it as you can see in the above passing comparison between Bertrand and Hazard (counted up to 63rd minute).

Benitez may have caught off guard by Fulham's defensive approach, and the benching of Mata, while understandable, didn't help. However, the first half told us all we needed to know about the opposition's defensive nature and I would have preferred a halftime substitution (Mata for Bertrand) to try to change the game. Instead Chelsea came out with the same team after the break. Fulham, in fact, got better at passing around in the back and slowing the game down. And they also managed to create a good chance with Riise bombing down their left side (the left back had 3 shots in the second half, none before the break).

If the Mata-to-Bertrand change came at half time, Chelsea's attack would not only have improved but there would also be enough time to make more changes to crank up the pressure on Fulham if needed. As it was, Mata came on at the 63rd minute and Marko Marin (HE EXISTS!!!) came on for Hazard only 8 minutes of normal time left to play. 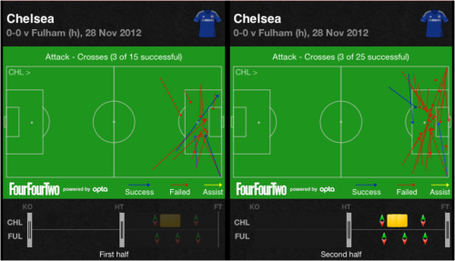 Even with Fulham's wingers tracking back, there was plenty of room for Chelsea's attack in the wide areas. One problem. They can't do anything with the crosses into the box. It shouldn't come as a shock when you look at who's in the box when a cross is made: ball-shy Torres surrounded by hobbit-size attacking midfielders looking up as the ball travel over their heads like Shire residents in awe of Gandalf's firework (You are welcome, nerds). A total of 40 crosses were made (both from open play and from set-pieces) and 6 reached a teammate aka 15 percent success rate. The only times Chelsea looked dangerous in this kind of situations was when their center-backs were in the box. 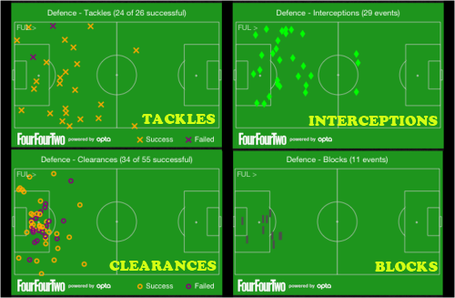 Chelsea dominated, partly because Fulham allowed them to, but failed to create meaningful chances. Although they passed the ball well in the defensive and midfield zones, the attack looked disjointed and lacked ideas. If the 0-0 draw against Manchester City took you back to last year's Champions League encounter with Barcelona (though Chelsea managed to score in both legs), this performance should remind you of the beginning of this season when the Blues found it hard to break down solid defenses. Roberto di Matteo (I MISS YOU!) solved that problem by letting Oscar, Hazard and Mata do whatever they like in the attacking third while sacrificing the defensive order. It seems like Benitez has broken the team down into pieces and reassembling them from the start. "Keep the team defensively sound while banging in the goals at the other end." The challenge is simple and straight forward, the solution is nothing but.

Chelsea vs. Fulham: Blues bore us again with scoreless draw