Share All sharing options for: A quick note on Chelsea's goal drought

Chelsea last scored late in the first half of a 2-1 loss to West Bromwich Albion at the Hawthorns. The goal came via an Eden Hazard header, the first he's ever scored (possibly the first he's ever won). Since then, despite having back-to-back matches at Stamford Bridge... nothing. Nothing for Chelsea, anyway.

Here is a graph showing how many goals all the other teams in the Premier League have scored since then: 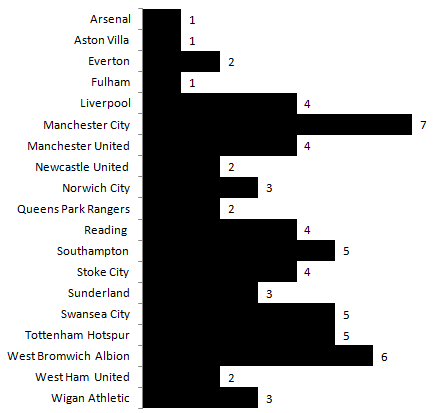 If my prose is poor today, it's a reminder that writing needs emotion and Chelsea aren't even capable of making me angry at this point. Every single Premier League team has scored since the Blues last found the back of the net. 64 goals have been scored in that time frame. Only three teams -- Arsenal, Aston Villa and Fulham -- have scored only one. And Chelsea weren't even able to score during the humiliation in Turin.

A quarter of Premier League goals have scored five or more since 3:39 pm on Saturday, November 17th. Almost fifty percent (nine out of twenty) have four or more. And here Chelsea are, with an attacking quartet whose combined transfer fee breaks into nine digits quite comfortably, and they can't do anything.

Yeah, the clean sheets are nice. But football, ultimately, is about entertainment, and without scoring goals that's virtually impossible. Watching and writing about Chelsea at the moment is like giving minute by minute updates on a funeral.