Benitez made small tactical changes to the team—sacrificing fluidity in attack to bring stability in defense—and earn a goalless draw in his first game as a Chelsea manager. 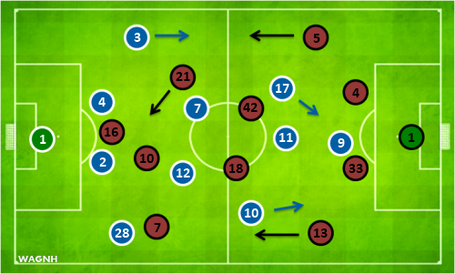 We all waited impatiently to find out what kind of changes Rafa Benitez would bring to the Chelsea team in his first game in charge but he surprised us by picking pretty much the same lineup and formation (more or less) that the Gone But Not Forgotten One would probably have selected. (The omission of Cahill from the starting XI was, I think, simply a matter of rotation with an eye on the midweek game against Fulham.) The Spaniard’s strategy, though, was more conservative.

Chelsea played not to lose rather than to win. Hazard, Oscar and Mata were tasked with defensive duties off the ball: the two in the wide position had to drop deep alongside their central midfielders while the one in the center press the opposition’s double pivot. Both Mikel and Ramires were less adventurous on and off the ball and the same was true for the fullbacks Cole and Azpilicueta.

Another notable feature of this set up was the lack of rotation between the three attacking midfielders – Mata started and stayed on the right, Oscar down the center and Hazard on the left. Oscar and Hazard switched after the break but Mata stuck on the right until Moses came in for Hazard. Otherwise the fluid change of positions between the three playmakers of recent months was not there. It is reasonable to assume that it has been forfeited for the sake of defensive organization and accountability.

Man City also started with a similar 4-2-3-1, but played with more attacking intentions. Toure and Barry (the top two passers of this game) saw plenty of the ball in midfield; Silva moved freely from his left wing position to find pockets of space all over the pitch; Kolarov and Zabaleta joined the attack whenever they could from their fullback positions. 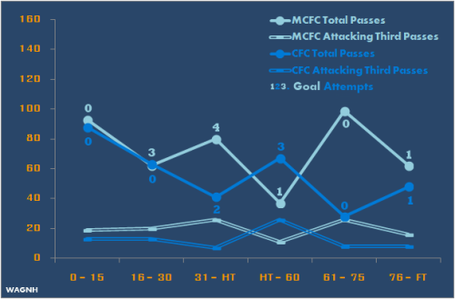 With only one team playing to win, it is no surprise that the Passing Timeline shows Man City’s dominance over Chelsea. Overall, City out-passed (425 vs. 305) and out-shot (9 vs. 6) Chelsea. In the attacking third, the Blues made about half the number of passes the visitors completed (67 vs. 118). The only period in which Chelsea got the better of City in terms of passing and shooting was the 15 minutes right after the break (Passes: 67 vs. 37; Shots 3 vs. 1). City regained their dominance in the last 30+ minutes, but did very little with it. 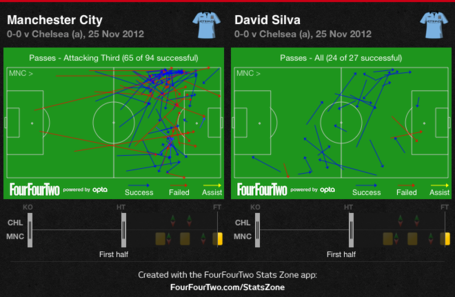 In the first half, City built their attack mainly down their left side. While Milner and Kolarov ran tirelessly up and down that flank, Aguero also drifted toward that side to get involve. And with Silva often covering Aguero’s absence from the center, the visitor’s attack was very left-handed. This meant that Mata was pinned back in the defensive zones in support of Azpilicueta who had a very busy first half. The right back made all three of his interceptions and five of his six tackles (all successful) in the first 45 minutes. He had help from both Mata and Mikel helped, but Azpilicueta stood up to the challenge and had himself a good individual performance defensively. 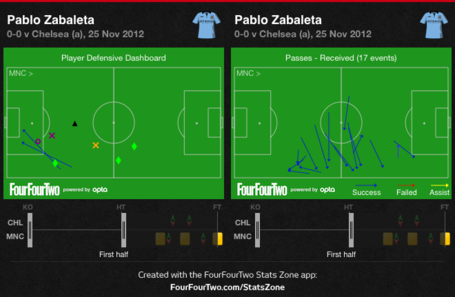 On the other side, Zabaleta was always around the halfway line, ready for pass if the point of attack needed to be switched to the right.In fact, most of the passes he received in the first half were horizontal passes from the center as City’s attack circulate the ball from the crowded left to the more open right.

At the same time, the Argentine defender anticipated passes to Chelsea attackers on his flank (usually Hazard) and intervened with a tackle/interception before bombing forward to join the counter-attack. On one occasion, Cole's last ditch challenge denied Zabaleta a shooting opportunity, and on another, Cech was forced to block the Argentine's fierce shot. This was probably why Benitez asked Oscar and Hazard to switch position after the break: the Brazilian moved to the left and the Belgian to the center. 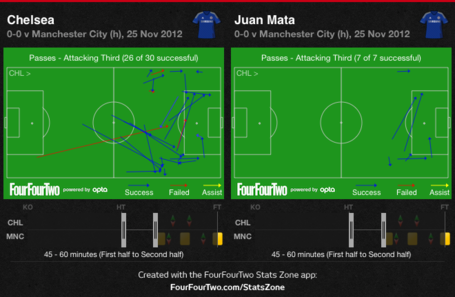 The home side were much more positive after the break. The passing was much better in both buildup play and in counter-attacks. Hazard enjoyed the space between City's lines, and the relative lack of pressure from the City center-backs; the Belgium connected well with Mata on his right as Chelsea's attack went forward down that flank. Mata was crucial in this 15-minute spell of good football, making 7 attacking third passes. Yes, 7 attacking third passes seem like nothing, except the Spaniard only made 9 in the second half (and 12 in the entire game). This was also the same period in which Mata and Hazard combined to set up a shooting opportunity for Torres who fired his only shot of the game over the crossbar. 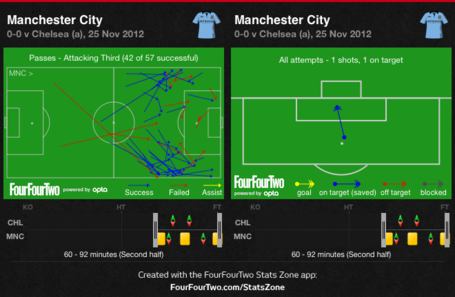 Man City wingers too switched flanks in the second half: Milner came to the right and Silva floated around on the left and center. The away side regained their dominance after first 15 minutes of the second half and their attack was more balanced, but they created very few chances. At one point, City were completing about the same number of attacking third passes as Chelsea were across the entire pitch. With both Mikel and Ramires backing off, Barry and Toure controlled the midfield but neither were able to initiate attacks with defense -splitting passes. Nastasic's injury time header was the solitary goal attempt from City in the last 30+ minutes of the game.

Both teams made changes after the 70th minute, but they were all like-for-like substitutions (Hazard::Moses; Mikel::Romeu; Dzeko::Tevez; Aguero::Balotelli) which indicated a draw would be a satisfactory result for both sides. None of these changes made any substantial impact on the game.

With this result and this performance, Benitez filled up enough of the glass to make the optimists slightly hopeful and left enough empty space for the pessimists grumpy. (A confession: I'm grumpy.) First-clean-sheet-in-seven-league-game vs. first-time-we-didn't-score-since-September. "We are better defensively" vs. "their attack was poor". The truth may lie somewhere between these positions/arguments, but we will only see it clearer as more games are played under Benitez. Are we going to be a boring team to watch from now on? Will our newly organized defense crumble under sterner tests? Or is it a step back before sprinting into an attacking side with better attack-defense balance? As someone once said, "We'll just have to wait and see."