New manager Rafa Benitez inherits a team with obvious tactical problems but no clear solutions. Where have Chelsea gone wrong this season and how can their issues be addressed?

I have not been shy in complaining about the system Roberto di Matteo's been employing in recent matches. The move to a more uniformly attacking band of three, combined with Ramires in the double pivot, has left the defence hopelessly exposed, and blaming the subsequent defensive collapse on John Terry's absence is, at best simplistic. Chelsea are a team with genuine tactical problems at the moment, and Rafael Benitez has an interesting task on his hands in solving them*.

*Originally, the above paragraph was going to end with 'must solve them', but frankly that's not true. Even with the issues as they stand, Chelsea are almost certainly one of the best three sides in England, and their progression in the Champions League has, from this point forwards, essentially zero to do with our own tactics and everything to do with Juventus.

What shape will he use? Instead of just assuming he'll carry on with the 4-2-3-1, let's get the answer from the man himself, who sat down with ChelseaFC.com for a quick questions and answers session:

Before I have used 4-4-2, 4-3-3, 5-3-2, but because this is the shape Chelsea have been using until now, I think at this moment this is the best shape for the team. You cannot change too many things, we have to do the things they were doing well, carry on with these things and then change the other little things.

The question then becomes how Benitez will fix Chelsea without changing the basic structure of the team. When you look beyond the trivial -- Fernando Torres isn't working, the defence is conceding lots of goals -- and give the team a thorough tactical survey, the fatal flaw should become very clear. Roberto di Matteo's Chelsea 2.0 were a broken side, with a midfield unable to glue together a back four which showed its steel in the latter portion of last season with an exciting, free-wheeling attacking band. 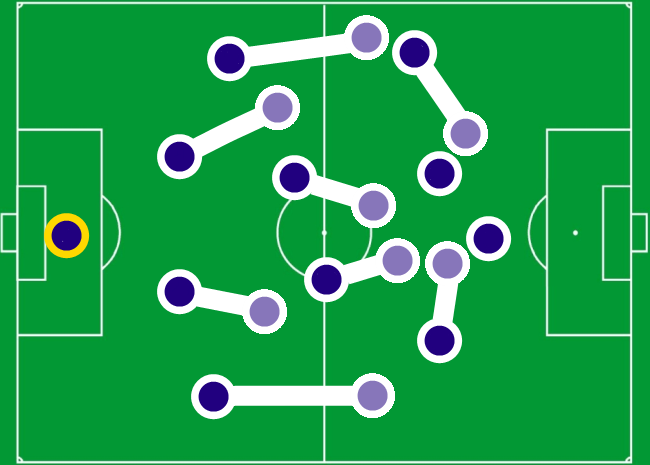 The players recognised it. There are hints that the manager did as well. Chelsea have spent the season drifting ever-further from true tactical balance, and it wasn't because of any lack of tactical acumen on di Matteo's part. The team that started against Wigan Athletic, Reading and Newcastle United had many of the hallmarks of a balanced Benitez side.

In Ashley Cole and Branislav Ivanovic Chelsea had a pair of defensively competent attacking fullbacks. Ramires and Ryan Bertrand were both happy to operate as defensive wingers, although the former provided a great counterattacking outlet as well. Juan Mata and Eden Hazard provided the flair at the top, allowing Torres to get onto the ball in good positions. Frank Lampard even did a (poor) impression of Xabi Alonso, sitting deep and linking play.

Since then, with the introduction of the all-flair attacking triumvirate of Oscar, Mata and Hazard and the replacement of Lampard with Ramires in the centre, Chelsea have looked a terrifying force when on the ball but completely incompetent without. Many are tempted to blame this on the absence of John Terry and his ability to organise the back line, but there's only so much organising the centre backs can do when your major flaw is the whole team being caught out of position when it loses the ball. That's what a 'fluid attack' does.

Excluding the second leg of the Napoli tie, Chelsea won the Champions League last year in classic underdog style. They defended brilliantly and then sprung the trap, beating Benfica and Barcelona before grabbing a draw against Bayern Munich in the Allianz Arena and then winning the penalty shootout.

But winning the European Cup failed to correspond with the style of football that Roman Abramovich wants Chelsea to be playing, and according to Sam Wallace of the Independant, there requirement was to drastically change the style of play this year. The manager started off cautiously before allowing the team to develop a major imbalance, and the 'Mazacar' eventually veered out of control and off the road -- something I warned of a month ago.

The Independent article, which you should read in full for further background, lists several teams from which Chelsea might draw inspiration:

The objective had been laid out to Di Matteo in simple terms during the summer. He was charged with creating a team with a distinctive, confident approach. The obvious example was Barcelona, but there are other coaches and teams who are admired at Stamford Bridge and regarded as a template for Chelsea.

One is Jurgen Klopp and his young Borussia Dortmund team. Roberto Martinez is well regarded for his determination that Wigan Athletic play bold, attacking football whoever the opponent. Juventus, who were also impressive when they got a 2-2 draw at Stamford Bridge in September, are held up as an example of the kind of team Chelsea should be.

The most interesting of the bunch is Borussia Dortmund, who generally play a defensive sound yet incredibly dangerous 4-2-3-1. When I spoke with Jonny of lankyguyblog, he compared Rafael Benitez's preferred playing style with that of BVB:

His main ideas are to have control of the space, to stay compact, both vertically and horizontally, to press aggressively as a unit and to try and pass the ball on the ground yet move it quickly. If you were looking at a team at the moment that plays like he wants to play, it would be Borussia Dortmund - the movements both defensively and in possession are very similar to what he used at Liverpool. Benitez does not want robots on the pitch but he wants a tactically aware group who know what to do in every given situation and who keep up their intensity regardless of the situation during the game.

That's a good sign, of course. Dortmund are one of the most impressive teams around (although they've been rather thoroughly unseated as 'best team in Germany' by Bayern Munich this year), and they're a real joy to watch. If Benitez can get Chelsea playing like Jurgen Klopp has BVB, we're in for a treat. Can he? That's an important question.

The season they came second (2008/09) despite having poor depth in the squad was again a great example of how he wants to play - a high line, full backs going forward, two holding players to act as reference points, to shut off space between the lines and also to entice the opposition's midfield to press, leaving space for the front four to provide width and depth and take advantage with quick movements, especially between the lines.

One thing that may be a problem at Chelsea is the lack of balance between the qualities of the front players and the qualities of the defenders. Because the Chelsea back four have problems playing higher up and are not very mobile, this means they tend to drop deep which, with the mobile technical front four staying high, means that they aren't compact enough. That may cause a problem for Benitez and he'd have to be pragmatic about it because the Chelsea team is not as balanced and together tactically as it should be.

I take some issue with the characterisation of the back line as completely immobile, but on the whole he's correct about the way Chelsea play. The attack and defence drift apart, and the midfield isn't good enough on the ball to provide an effective link between the two.

This has two knock-on effects. The pivot has to play much higher than it should in order to support an attack, and the fullbacks are asked to be much more aggressive than they should be. When Chelsea lose the ball with both shielding elements out of position, the defence -- whether it's David Luiz, Gary Cahill or John Terry in the centre -- is horrendously exposed.

The most sensible tactical tweak Benitez could make is to break up the Oscar-Mata-Hazard axis in an attempt to restore some balance to the team. I've been arguing for some time that Chelsea would be best-served playing with a midfield trio in a 4-3-3 or 4-3-2-1, bringing Oscar deeper and allowing for a better link between the midfielders and the forwards. But if Benitez sticks with the pivot, he's got an interesting dilemma to solve.

Curbing the voracious attacking tendencies of the third band may or may not be possible considering that this will be played out with Abramovich's wants looming in the background. But even if Benitez can do so, he still faces a problem -- even without the front four pulling away from the pivot, the combination of Mikel and Ramires still don't possess the quality (or, in Ramires' case, the tactical awareness) to effectively link up play.

The pivot is at the heart of the 4-2-3-1. The two plays have to screen the defence, move the ball quickly and accurately upfield and support the attack without risking the team's overall shape should the ball be lost. And right now it's doing none of those things.

Let's go back to Klopp's Dortmund as a reference point. Their standard pivot uses Sven Bender as a defensively-minded box-to-box midfielder and Ilkay Gundogan as a more dedicated passing player. If one squints very closely, Mikel might start morphing into Bender, but there's very clearly no Gundogan (or, if we want to go back to Liverpool, Xabi Alonso) in this Chelsea squad.

It's entirely unclear what to do about that. Oscar could be dropped deeper into the pivot, with Ramires pushed wide. If Benitez wanted to get really crazy, David Luiz could be deployed as a central midfielder. Lampard might be reinstated when fit, as he's the player most suited to the role at present, but relying on a fragile, elderly player for your system to work is a sign that your system is kind of broken.

My only slightly-educated guess is that it will probably be the first option, with Oscar in the pivot and Ramires wide right: 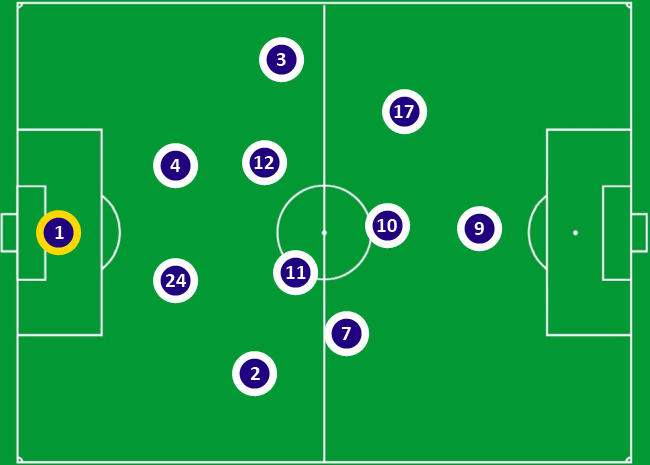 That's not ideal for several reasons, notably Ashley Cole requiring more cover than Ivanovic, Oscar being shoved into an unfamiliar position, and Ramires' bizarre struggles with wide play this season, but it's better than what we've been doing recently.

No matter how this issue is fixed -- if it gets fixed, even -- if Chelsea stay in a 4-2-3-1, Benitez will be doing nothing more than plastering over the cracks until reinforcements arrive in January (a midfielder and a centre forward are required at this point). As far as tactical acumen goes, the only upgrade I'm seeing on Roberto di Matteo is that the new manager will have more leeway to play pragmatic, balanced football rather than constantly being pushed into a suicidal attacking game.

Sunday against Manchester City will give us a strong indication of how Benitez wants to play this. The tactical flaws in the old setup were obvious, but given the personnel on hand, fixing them will be far from straightforward.