Michael Laudrup brings style to both the touchline and the pitch with his Swansea side. 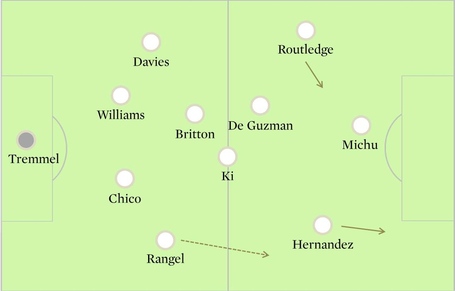 Swansea City broke away from tradition to become the first Welsh side in the Premier League, but they also defied common practice by attempting to play a possession-based game.

Their style has changed slightly since Michael Laudrup replaced Liverpool-bound Brendan Rodgers, but the guiding principles of short passing remain. They recruited fairly heavily during the summer with Scott Sinclair's sale to Manchester City funding moves for Pablo Hernandez, Michu and Ki Sung-Yong, and are now firmly trying to implement Laudrup's preferred brand of high-tempo football

With one side unlikely to change from their ideology - if Laudrup didn't change strategy for an away match against Manchester City, he's unlikely to ever change - the tactical battle rests upon Di Matteo's strategy. Broadly, there are two different approaches he could take: sit deep, allow them to move forward and play on the break, or stop them at the source by pressing hard on the defence and prevent them from playing out from the back.

Considering Di Matteo has taken a fairly offensive approach to matches this season, the latter seems far more likely. With Frank Lampard injured, the midfield pairing of John Obi Mikel and Ramires is all but certain, while the triumvirate of Juan Mata, Eden Hazard and Oscar appears likely to start (one would expect Marko Marin's debut to come from the bench), although Victor Moses may be pushing for a start following an impressive showing in the Cup midweek. That, and the testing schedule ahead, might inform some rotation in the attacking band.

Di Matteo's primary concern will be preventing the Swansea midfield from dictating the play, as they did against Chelsea on the final day of the January transfer window. Whereas the side that held Chelsea to a 1-1 draw consisted of a midfield of Joe Allen, Gylfi Sigurrdson and Joe Allen, the current Swansea team contains two new players, and three clear roles: Leon Britton sits deeper and is crucial to dictating the tempo, while Ki Song-Yung plays more of a box-to-box role and Jonathon de Guzman is the attacking midfielder providing support to Michu.

All three are superb passers (with Ki boasting an impressive long pass which allows Swansea to switch the frame of the attack quickly), and if Di Matteo wants to prevent Swansea from playing their natural game, he needs to ensure that the midfield is closed down quickly and doesn't get time and space on the ball.

The clearest demonstration of the difference between pressure and non-pressure could be seen at the Etihad Stadium, where Sergio Aguero and Carlos Tevez played high up the pitch, closer to the central defence, before a half-time switch saw Carlos Tevez moved deeper, instructed to pick up Britton when Swansea had possession. A look at the passing statistics reveals this contrast, as Britton completed just 13 passes in the second half compared to a tally of 36 in the first.

Crucially, Michel Vorm is ruled out with injury: the keeper was signed by Rodgers specifically for his ability to play out from the back, and although Gerhard Tremmel is a capable replacement, it is difficult to replace the technical ability of the Dutchman. Chelsea will likely to sit high up on Swansea's defence and force Tremmel into long balls, and thus, a greater risk of turnovers.

Because a possession game demands high pressing and thus a high line, Swansea energetically close down from the front, with the wingers moving inwards to close down passing angles for the centre-backs, while the defensive line moves quickly up the pitch to prevent space opening up in behind. Chico has been absent recently as a result of suspension and injury (and may well miss this clash), but it's important to note how he is the more combative of Swansea's centre-backs, with Ashley Williams often sweeping in behind to cover his teammate.

The by-product of Swansea's pressing is that they noticeably tire in the second half - that was a key feature of City's 1-0 win.

The biggest change between Laudrup and Rodgers has been the speed of Swansea's attacks: the latter is a fan of Barcelona and their methodical, careful approach to build-up play, whereas Laudrup encourages his players to take risks and attack before the opposition has time to adopt their shape. They're more purposeful and direct in possession.

Laudrup likes his wingers to play high up the pitch and cut inside to play passes through the centre of the pitch, a tactic fitting of the characteristics of Hernandez, Nathan Dyer and Wayne Routledge, who has become a regular under the Spaniard. Hernandez and Routledge were preferred against Manchester City, but Laudrup has rotated his wingers regularly both in terms of selection and position, meaning any pairing of the three is likely. Dyer is hard-working and likes to use his pace to beat defenders, while Hernandez is more direct and often drives to the by-line before pulling back a low cross. Routledge is more a midfielder and tends to move inside into central positions.

Michu will start in the centre - he's featured both as an attacking midfielder and a lone forward in the past few weeks, and seems likely to reprise the latter role as to maintain the three man midfield. His versatility is just one element of his superb all-round game - having started the season ‘in the hole' behind Danny Graham, the latter striker has since been displaced in favour of the Spaniard. He was widely viewed as the replacement for Sigurrdson in the attacking midfield role, but is more of a Lampard-style midfielder than a classic playmaker in the vein of Chelsea's creative trio, as illustrated by his goals early in the campaign.

His shift to centre-forward wasn't completely unexpected: he played that role before at Rayo Vallecano, and generally plays with his back to goal, encouraging midfielders and wingers to get forward. His movement into deeper positions also helps keep the flow of Swansea's passing.

Swansea's biggest loss of the season came in their home fixture against Everton, where the away side relied upon the left-sided bias of their attack to overwhelm right-back Alan Tate.. Leighton Baines combined with Steven Pienaar down the flank while both Victor Anchiebe and Marouane Fellaini drifted to that side, and the problem was obvious when Tate was substituted and Dyer was then sent off for a foolish challenge. Angel Rangel will be the right-back against Chelsea but with Ashley Cole and Branislav Ivanovic both willing to storm forward and cause overloads down the wings this could be an area of strength for Chelsea. But Laudrup will also be looking to turn this weakness into a position of strength, by attacking Chelsea's clear vulnerabilities in those areas as exposed by Manchester United.