Starting with that mental 5-4 victory over Manchester United in the League Cup and ending with the disheartening defeat at West Bromwich Albion this Saturday, here follows the latest update to your community player ratings.

In the community player ratings update from two weeks ago, we had taken a look at your grades through the 3-2 home defeat at the hands of Manchester United (i.e. Clattenburggate). Chelsea have won just two of the five matches since. Predictably, the ratings have suffered.

In addition to the three matches that have been played in the last two weeks, I've also included the two matches that were missing at the time of the last post (Manchester United in the League Cup and the draw away to Swansea). At the time I had predicted that the lackluster effort at Swansea would be the lowest rated match of the season but that dubious distinction seems to have remained with the drubbing that the team received in Donetsk (which was not reflected in the scoreline that day). The effort from Saturday came close though: 5.72 average at West Bromwich Albion compared to 5.65 at Shakhtar Donetsk. The Swansea match does get to hold the distinction of having the lowest rated "man of the match" - Victor Moses's 7.1 a testament to the level of disinterest that seemed to permeate the squad that day.

Juan Mata continues to be your highest rated player, ahead of Eden Hazard, Oscar, and Petr Cech. Those four have claimed the man of the match a combined 14 out of the 17 votes that we've had. At the other end of the scale and joining Frank Lampard in the under-6.0 club are Fernando Torres, Ryan Bertrand, Lucas Piazon, and Oriol Romeu. The latter especially has not exactly covered himself in glory in the long-awaited opportunities that he's been receiving: 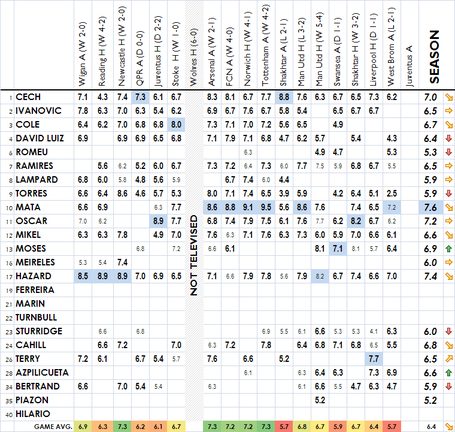 I've added some colorful indicators to help gauge the players' and the team's performances. The individual arrows are with respect to the specific player's overall average ratings from the last post (i.e. from five matches ago). So based on that, it seems that the forms of only Moses and Cesar Azpilicueta are improving, with John Terry's truncated appearance and goal also pushing his rating up a little bit higher.

There's one more thing I wanted to look at today and that's the individual player ratings of the attacking band, specifically the Three Musketeers with Victor Moses in the d'Artagnan role: 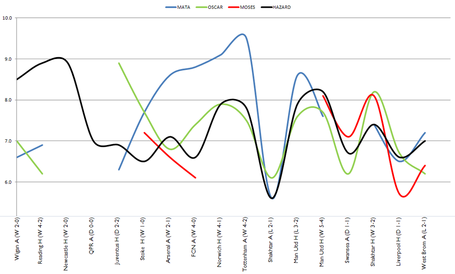 What we can see here is that while Eden Hazard carried the team early, before first Oscar then Juan Mata popped up with bits of magnificence (or in the case of Mata, a whole month of magnificence), lately none of the wonderkids have managed to dominate and simply take over a match.

Could this be a result of fatigue? Or opposition defenses learning to cope with the Chelsea attack? Are they stepping on each other's toes? Or perhaps, in a stroke of bad fortune, they've all hit a bit of a rough patch at the same time? Is Marko Marin the holy grail? I have no answer to this, but tomorrow's match would be a perfect opportunity for one of them to step up.