A very competitive 2-1 loss at West Bromwich Albion shouldn't really be the source of a general wailing and gnashing of teeth. The Baggies have a good team and played well, while Chelsea fielded a depleted lineup -- Ashley Cole, John Terry, Branislav Ivanovic, Ramires, Juan Mata and Oscar were all missing -- and nearly pulled things out in the end anyway. Yes, Chelesea are on a poor run of form, but there's no need to panic just yet. Instead, let's us the defeat to take a look at the problems that are plaguing the Blues at the moment. 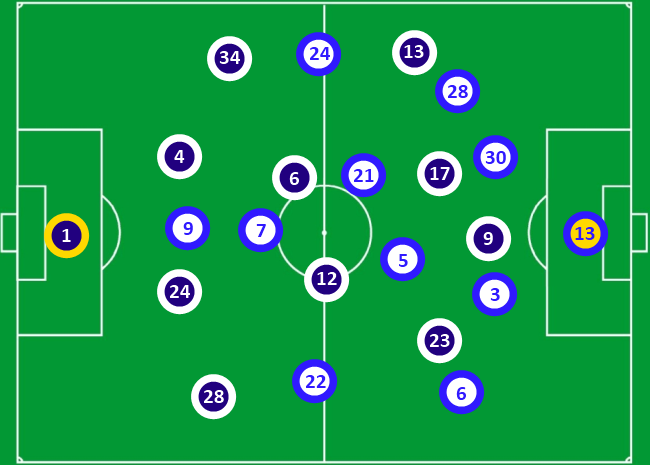 Tactically, this one would have been presented as 4-2-3-1 vs. 4-2-3-1, but it was interesting to see how the strict organisation of West Brom's shape compared with our rather more frenetic display. In fact, Steve Clark's team reminded me of Chelsea from their run to the Champions League final -- the wide players in Peter Odemwingie and Zoltan Gera were incredibly defensive, leaving Shane Long and James Morrison free to work the channels and terrorise the centre backs.

Michael Cox has already written at length about West Brom's two most attacking players, so I'll pass you along to him for further reading there. And I'm going to avoid writing about Fernando Torres' play because I'll get super-angry. Instead, I'd like to focus on the way we conceded the two goals, and what we can learn from them.

Hands up if you're blaming David Luiz for this one. Yep, losing your man and allowing him a far-post tap in is generally a bad idea, and we can happily pile plenty of guilt onto the Brazilian's shoulders. It was terrible marking of a dangerous player, and everyone's aware that he needs to do better.

But saying 'David Luiz screwed up' doesn't explain the goal, which was the result of a series of mistakes compounded by the curly-haired one's inattention. Let's take a look at how it developed:

Victor Moses was on the ball after a long series of Chelsea possession. Thanks to West Brom playing so deep and refusing to press with more than Long and Morrison, the Blues were allowed to dictate play with their back six, and spent the first eight and a bit minutes of the match looking rather good. Here, Moses has the opportunity to play Ryan Bertrand into space, but opts to square to Daniel Sturridge instead. That turns out to be the wrong call, as Gabriel Tamas is able to intercept.

The next key moment was in midfield. No sooner did West Brom have the ball under control than they nearly lost it again, with a forward pass to Long resulting in a piece of miscontrol from the striker. John Obi Mikel looked in a position to recover the ball for Chelsea, but Long worked very hard to ensure that the Baggies retained possession.

And here's another interesting still. Liam Ridgewell is on the ball and nobody is picking him up. Theoretically, that's Sturridge's responsibility, with Cesar Azpilicueta backing him up (although Zoltan Gera and the movement of Morrison are more pressing concerns for the young right back). A 4-2-3-1 is supposed to defend with two banks of four, the wingers tracking back to form a line with the pivot midfield. Here, the defence is maintaining a line and the midfield is a shapeless, useless blob.

Eventually Gary Cahill hacks clear, and the defence can actually form up. This should help, but it doesn't.

Does someone want to try to explain to me how this happens? There are three Chelsea players and three Baggies players. Two of them shouldn't be unmarked. This is absolutely farcical defending. Azpilicueta should be on Gera, Sturridge should be running to cut off the passing lane to Ridgewell, and Oriol Romeu needs to prevent the ball from getting to Morrison in space. This is basic, basic stuff.

And you know what happens next. Morrison gets the ball in space, swings in a dangerous cross, and David Luiz adds to the giant pile of mistakes with a grandiose screwup, and West Brom lead 1-0.

Chelsea lose the ball after an Azpilicueta cross is cut out, and West Brom can counterattack. Note the position of the pivot midfielders in Mikel and Romeu. A double pivot is supposed to ensure that if one player is caught out of position, the other races back to shield the defence.

Which is the opposite of what Romeu actually did. He charged towards Long for no reason and a simple pass behind him meant that within about three seconds of picking up the ball West Brom were behind the midfield. Which means lots of space to play with.

With Ryan Bertrand pushed up high and slow to get back, Chelsea are forced to switch into a back three with David Luiz wide left. Bertrand, to his credit, realises the issue and races back, but he tries to take David Luiz's spot as a centre back rather than shutting off space on the left.

As a result, it's easy for Long to get a cross in, and a lack of marking (Bertrand went to sleep) makes Peter Odemwingie's near-post header much easier. This is an ugly goal to concede, symptomatic of a broken midfield, awful fullback defending and a lack of cover offered by the attacking midfielders.

So far I haven't really talked about di Matteo's team selection, which ended up backfiring. Or looking like it had backfired, at any rate. Although Ashley Cole and John Terry were injured and thus unavailable, most of the 'first choice' starters who didn't play were rested for the match rather than being entirely unavailable. Di Matteo's been slammed for this -- many have even accused him of not taking West Brom, who look like semi-serious top four contenders, seriously.

Instead of assuming that the manager's gone completely insane, I'm choosing instead to assume that the rest was to do with the fact that the non-injured players had just gotten back from the international friendlies that were bizarrely scheduled for midweek. I'm not a fan of friendlies at the best of times (as an England fan, I'd like international football to be abolished, to be honest), but when Spain end up in Panama and Brazil in New Jersey on a Wednesday while their league teams are due to play on Saturday, that's going to cause some problems.

Anyway, under the assumption that the selection was driven by fitness rather than with the Juventus game in mind, I don't see much that di Matteo did wrong. His tactical move to a semi-4-4-2 midway through the first half, with Moses moving from left to right*, Sturridge turning into a (kind of) centre forward and Eden Hazard on the left wing, had an immediate positive impact. His substitutions were all completely sensible within the context of the game (although the fact that we ended up running an Oscar-Ramires pivot was weird). So there's not much for me to complain about there.

*I really wasn't sure of this at the time because of the weakness down the left side and the fact that Moses was probably our brightest spark up to that point.

But that doesn't excuse the fact that the whole structure of the team is broken. The defence is being isolated and can't cope -- their 'protection' is currently Mikel and a collection of tissue paper. The wingers aren't defending. Nor are the midfielders. This is something that can and should be compensated for with a formation tweak, and unless it gets sorted out soon these defensive problems are going to continue.

West Brom vs. Chelsea: Chelsea look to return to winning ways on Saturday