Chelsea and the autumn slump

Share All sharing options for: Chelsea and the autumn slump

A late autumn slump? Well, I suppose we're used to this. Chelsea have, after all, been somewhat notorious for dipping in form between mid-October and the end of November. It's not a tradition any of us would like to see continue, but at least this isn't some new nightmare. Horror movies are less scary on repeat*.

*The winner of the much coveted "Graham's worst metaphor of the day" award, probably.

In every season since We Ain't Got No History has launched, the Blues have undergone a miserable spell between October 15th and November 30th, especially in the league. But I had a sneaking suspicion that this year's was slightly more miserable than usual. And so I went to check.

It turns out that it is (with the caveat that we have plenty of time to pick up some more points by the end of the month. Looking at Premier League games over the past nine seasons, the worst we'd done between Oct. 15 and Nov. 30 was last year, with Andre Villas-Boas at the helm -- we came away with 1.2 points per game in that span, as opposed to 1.8 points per game everywhen else. This season, we're sitting at one point per match since mid-October. Before then? 2.7. Yikes.

Here's the full set of data: 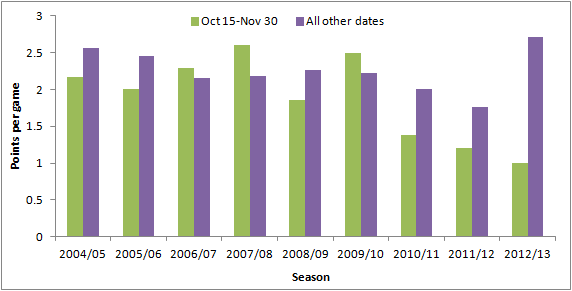 Even during the Mourinho days, we were still prone to this sort of blip -- we've only out-performed the rest of the season three times over the past nine seasons, and once in the past five: 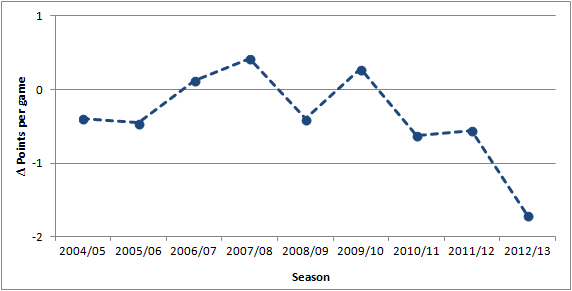 I don't have anything particularly analytical to say at this point. Nothing jumps out at me as an obvious cause for the slump, especially the more recent, drastic ones. Certainly, the difficulty of the schedule is such that Chelsea were always going to have trouble over this stretch this season, but that doesn't tell us why we seem to do this over and over again, nor does it adequately explain the magnitude of the slump.

But hey, now you know that it's even worse than usual. When they tell children learning is fun, they're lying.