Two 1-1 draws in the Premier League against sides heavily influenced by Brendan Rodgers, and the former Chelsea manager had a big say in the tactical proceedings at Stamford Bridge.

So Chelsea drew with Liverpool on Sunday. That was somewhat disappointing, considering the Blues had been somewhat in control for the majority of the match, before losing their way and allowing serial pest Luis Suarez to pop up with an equalizer. Given the profligacy of the home side both in finishing and creating chances, a draw was probably a fair result, meaning Chelsea slipped to third in the Premier League.

This was an unusual formation battle: 4-2-3-1 v 3-5-2. Brendan Rodgers's preferred shape is a 4-3-3, but the absence of Martin Skrtel forced his hand to a three-man defence, as previously exhibited in matches against Anzhi and Everton.

Roberto Di Matteo only made one real surrpise selection, electing for Branislav Ivanovic to pair up with the returning John Terry in central defence, meaning Cesar Azpilicueta came in at right-back. 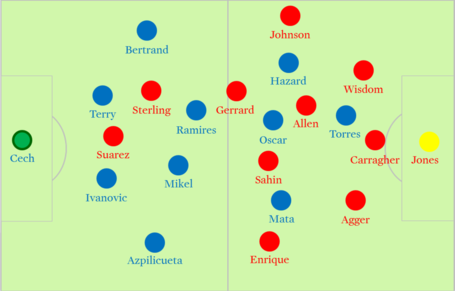 Chelsea's trident of Juan Mata, Oscar and Eden Hazard is clearly Di Matteo's first choice selection , meaning the tactical battle now rests upon how the opposition manager chooses to counter that threat. Here, Rodgers was reacting more to his own injury worries rather than specific threats from the Chelsea side, but with the back three, he was still posing an interesting question to Chelsea, one that they have somewhat struggled with this season: how do they deal with the wingbacks?

This battle eventually dissolved into simple one-on-one confrontations down the flanks: Bertrand against Johnson, and Azpilicueta against Enrique. That was because Mata and Hazard weren't overly concerned about following the wing-backs into deep positions: rather, the two playmakers dropped deep to form a second bank of four and establish a good defensive shape, meaning Liverpool struggled to play passes through midfield. Despite the two outside centre-backs having a substantial amount of time on the ball , the majority of their passes were unimaginative, and aside from a few decent dribbles from Agger into the Chelsea half, there was little coming from the away side offensively. In fact, Carragher and Wisdom only misplaced three passes throughout the entire game, while Agger was a little more sloppy with a completion rate of 90%. 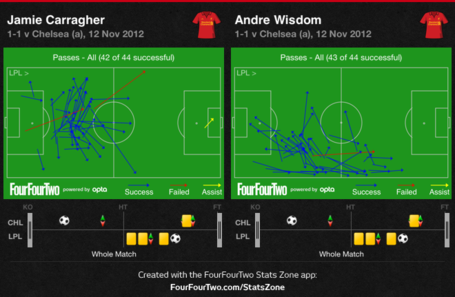 Chelsea were a little bit more enterprising in the final third, but with the middle of the pitch particularly crowded, the triumvirate struggled to play their usual incisive passing game. In terms of space, the wings were the point of difference, where Chelsea had the opportunity to overload Enrique and Johnson down the wings by bringing the fullbacks high up the pitch. However, they were wary to do so, considering that would leave Terry and Ivanovic in a direct 2v2 against the mobile duo of Raheem Sterling and Suarez.

A goal from a set-piece was therefore the highlight of the first half, and it's worth considering just how Terry was able to easily place Mata's corner past Brad Jones.

Zonal marking's been the focus of much debate recently, but this is a clear demonstration of the pitfalls of man marking. Liverpool employ a hybrid system (as do most teams), and you can clearly see how Sterling and Gerrard are essentially 'free' players, charged with clearing balls away from the near post zone. Chelsea put five players in the penalty area for this corner: Torres, who is picked up by Wisdom, Mikel, who is Carragher's man, Hazard, who is the attention of both Jones and Sahin, Ivanovic, who is being tracked by Johnson, and crucially, Terry, whose marker is Agger.

The goal arises from a piece of kerfuffle from Agger and Johnson, the latter so concerned with marking Ivanovic (and understandably so, when remembering the Serbian's double in the Champions League a few years ago) that he obstructs the path of Agger. The flow on effect of this is that Terry is left free of any marker and is able to guide the ball into the back of the net with relative ease.

Acknowledging that his side were struggling to create little in open play, Rodgers' initially made the subtle change of inverting his midfield triangle - as the television cameras showed - but did this little to change things around, with the problem coming from the transition of defence to attack. In fact, it only left Allen more isolated in front of the defence, as illustrated by Mata's chance in stoppage time.

Therefore, he elected to change things completely, by reverting back to his 'standard' four-man defence, and being somewhat limited by his bench, made just one change, introducing Suso for Sahin. The Spaniard went behind Suarez with Sterling shifted to the right, and Enrique told to masquerade as a left winger.

In a more familiar system, Liverpool were more cohesive: the pressing was more effective, the passing more cohesive, the movement more synchronized. Rodgers recognised this post-match. "We normally play with three forwards and that allows us to press the game," he said. "With the two front players we couldn't get our distances right. Once we changed it around to 4-2-3-1, we got back on to the front foot again."

The goal again stemmed from a mistake at a corner, but it was reflective of the flow of the game. Liverpool pressed their advantage late on, using the unusual combination of Enrique and Johnson down the left to good effect. WhoScored suggests they had a rather unnatural bias towards that side of the pitch. 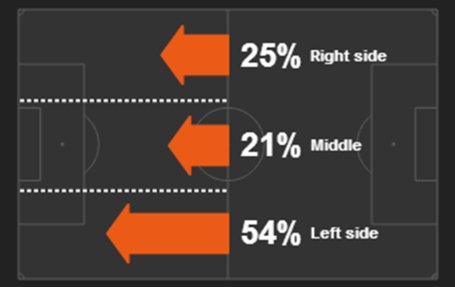 Di Matteo's changes were all fairly obvious changes, and the hooking of Oscar for Victor Moses is fast becoming his 'go-to' change. The Nigerian offers an excellent blend of physical attributes down the right hand side, but I'm somewhat wary of the decision to remove Oscar, considering the Brazilian's awareness and intelligence in the central attacking position. He's central to Chelsea's ability to transition possession into something meaningful by dropping deep and dragging deep midfielders out of position, and without him on the pitch, Chelsea lose their way in the midfield zone, as was so clearly evident here when Ivanovic and Cahill constantly resorted to overly ambitious long balls towards Daniel Sturridge and Juan Mata.

Stephen's had his say on Torres' performance - it's scathing, if you haven't read it, which you really should - while I've also written a bit on the game for Soccer Without Limits.

I'd hate for the fallout from this game to be that we are lurching into crisis, but it'd be remiss to suggest there aren't clear flaws at present. The 4-2-3-1 involving the three majestic midgets is very clearly the default system, but there are clear drawbacks to a system that expects Hazard and Mata to be somewhat defensively capable and Torres to be reasonably competent. Fatigue was, as a generalisation, a factor here, and more rotation is probably necessary to remove the risk of burnout. Did we learn all that much from this defeat? No, not really, nothing we didn't know before, and here's hoping this is just a minor blimp instead of being the start of our usual apocalyptic implosion around the start of winter.