On Fernando Torres and Chelsea's 'lack of width'

Fernando Torres is failing to make basic, fundamental runs, and it's costing Chelsea chances on goal.

Share All sharing options for: On Fernando Torres and Chelsea's 'lack of width'

Fernando Torres. Where do you start with him? He might be the most polarizing figures in professional sports today, and for good reason. We all know the story by this point...he was one of the absolute best players on the planet for Atletico Madrid, Liverpool, and Spain. Chelsea paid an obscene amount of money for him, and he's been basically worthless in his time at the club.

In the past, we've examined things that Torres was doing (or not doing) that have caused him to struggle. Against Liverpool I saw loads of those same types of things, and I'm going to highlight a pair of golden opportunities that never came to be because of simple fundamental mistakes by Torres.

First, we're going to look at a very classic one or two touch counter attack that should have been a real problem for Liverpool. In the 62nd minute, John Obi Mikel intercepts the ball and plays his first touch to the feet of Eden Hazard. Here's what the setup looked like when Hazard got the ball: 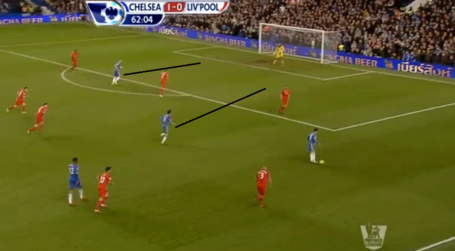 This is an easy, easy chance to create, and it's the kind of stuff that I expected junior varsity players to be well drilled in from the junior high and pee-wee levels. Hazard has the ball wide. Torres runs to the far post, Oscar to the near. Juan Mata (just off screen) trails the Torres run and positions himself at the edge of the 18-yard box. Torres is two yards onside (Carragher), so make a hard run and give Hazard a target, Fernando.

Unfortunately, Torres does not make the run so that Hazard's first touch can be a ball played to the far post, and it forces Eden Hazard to take a second touch. Here's what he was looking at just prior to his second touch: 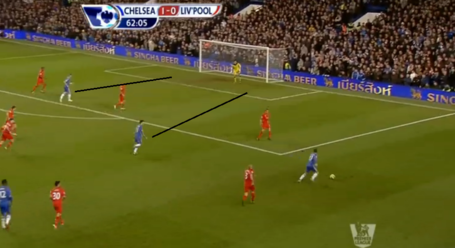 Not bad, but things are getting congested. Hazard can still cross the ball to the far post if Torres makes the run, although the margin for error is getting much smaller. Still, Torres does not move and Hazard is forced to take a third touch of the ball: 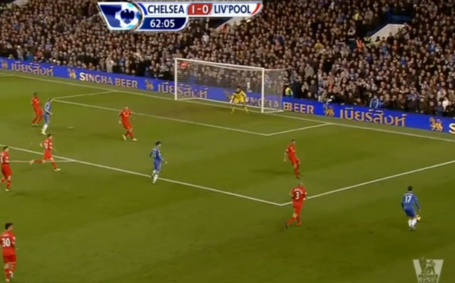 Now the opportunity is lost, and Hazard tries to cross the ball to Juan Mata who is just off-screen trailing the play. The correct pass would probably have been to Oscar in this situation, who has made a good decision and provided a decent outlet despite Torres growing roots. Mata would have actually been a great target had Torres made his run, as acres of space would have opened up behind him as well.

The best choice here was always a cross to Torres though, had he simply decided to make a run to the far post to provide a target. The most irritating part of this for me was the reaction of Torres: 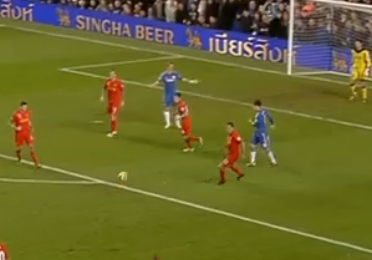 This is Hazard's fault? You didn't run at all you [fun]ing idiot, what the heck is he supposed to do? He was clearly looking for an opportunity to hit you at the far post, and you decided to, well, do absolutely nothing except coast into a defender. This is basic, fundamental stuff here, stuff that I expected my high school teams to recognize immediately. You've been playing the game your entire life. This should have been a dangerous chance, and instead it's an easy clearance.

Next up, we'll look at one of the most perfectly set up opportunities to create a chance on the counter that I've ever seen. It happened just one minute after the buildup I just highlighted. Juan Mata plays a perfect first touch ball into space that Ryan Bertrand can run onto. Here's what it looks like as Bert approaches the ball: 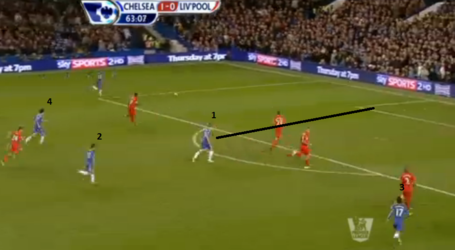 This is amazing spacing, and again, this is basic, fundamental movement. I've numbered each of the players, as they all have a very easy run to make that gives Bertrand loads of options They are:

Easy, right? At worst, this counter should result in a defender or the keeper needing to make a tough play. So why don't we fast forward to the moment Bert gets to the ball and see what it looks like: 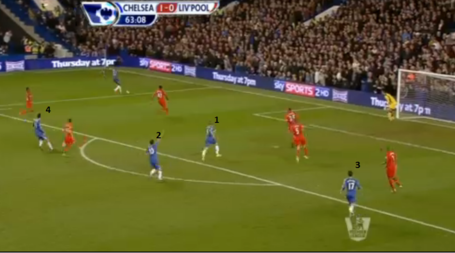 Why is Torres where he is at this point? The most notable part of this screencap is just how much everyone else in the picture has moved in the time it took for Bert to get to the ball. Everyone has run hard and placed themselves absolutely perfectly to create as many options as possible. Everyone except for Fernando Torres, who was the most important player in this particular buildup.

Bert had a golden opportunity to cross to the near post, but nobody made that run. That screws up the spacing for everyone, meaning Bert now has to take another touch. Here's what he was looking at just ahead of that second touch: 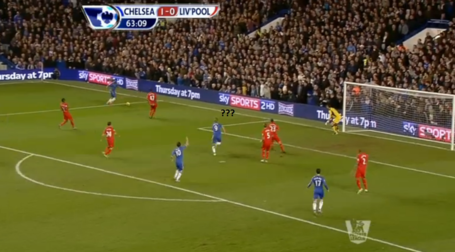 Again, look how little the "center forward" has moved. Space is getting tight for Bert, and he looks like he's really only got a single lane left to pass the ball into now that the defense has had time to close down Mata. It's going to have to be a hard cross across the face of the net. Luckily, someone has recognized this and is finally running hard to meet that forthcoming cross.

There's another issue here, though. Look where he's running! Seriously, Torres is now running at an angle away from the near post. To my dismay, Bert's cross now gets wasted, as Torres is just a hair late to get to it. Even after being ridiculously slow to get moving, simply running directly to the post would have resulted in a chance. But no...the dummy has to run at an angle.Torres slowed the counter down because he couldn't make a basic run, made the wrong run when he did go, and wasted a second glorious opportunity just 60 seconds after he wasted the first.

I hear all the time that Chelsea lack width. That is just wrong. Chelsea lack the tools to take advantage of the width that they do have right now. In both of these examples (and there were many, many more on Sunday), Chelsea were in fantastic position to create a chance to score with a cross from wide. In both of these examples, no chance ever came because we don't have a player running into the correct positions to take these chances.

Fernando Torres still has uses, but at this point in his career, he just can't play as a lone center forward. The things he did early in his career that made him so successful are thing that he's just not doing anymore, instead he is playing like a "false nine", coming to the ball and slowing the buildup significantly.

I have my suspicions that these habits are largely due to the system the Vincente Del Bosque and Spain use, but regardless of how they started, he's waiting for the ball to be played to his feet far too often instead of attacking the open space in front of him. This is impacting the buildup from the entire team, and it's costing Chelsea chances.

Frankly, that is all I care about. If Torres is costing Chelsea chances to score because he is not doing fundamental things correctly, it behooves the club to put somebody on the pitch that will make the correct decisions. This is all easily correctable, just make the obvious runs and the chances will come.