In just a few hours, in their 11th match of the Premier League season, Chelsea will take on Liverpool. Quickly then, let us cast a glance over a few statistics from the first ten (and the various matches from other competitions that occurred in the meantime as well).

Don't get your hopes up; I'm not Graham and this won't be Earth-shatteringly deep or groundbreaking. It will be similar to my efforts last season, looking at minutes, goals, and assists (part 1, part 2). I'm not saying you should check those out, but there may be a pop quiz at the end.

If you're looking for frou-frou new agey things like passes and uselessly defined chances created (a.k.a. key passes), etc, I'd recommend browsing WhoScored or EPL Index or the like. You will find Eden Hazard leading the club in shooting & dribbling; Juan Mata leading in creativity; John Obi Mikel in passing volume; David Luiz in long-range passing; Ashley Cole in tackling & interceptions; Fernando Torres in turnovers and being dispossessed. Also, everybody sucks at finding teammates with their crossing. Fun!

1650 minutes of non-preseason football has been played by Chelsea so far: 900 in the Premier League, 360 in the Champions League, 390 in various Cups & Crap - and I am including in there that nonsense exhibition thing that some call the Community Shield and some call the Charity Shield and most call useless unless you actually win it. In which case it's almost not useless. See also: UEFA Super Cup. Fergie time and regular added-on time are not really accounted for but such is life. 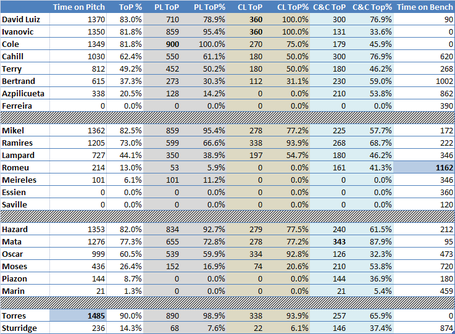 Unsurprisingly as the first choice and often only fit center forward on the team, Fernando Torres leads the team in minutes played, having spent a whopping 90% of all available minutes on the pitch. Ashley Cole is the only player to have played every single Premier League minute so far, while David Luiz and Branislav Ivanovic can both claim that honor in the Champions League. Juan Mata, of all people, is the leading minutes man in random crappy Cup ties - and that doesn't strike me as a smart plan, in all honesty.

Don't look now, but both John Terry and Frank Lampard are currently below 50% for minutes played. Sure, injuries and suspensions have played a big part, but we probably should start getting used to such scenarios for the near future. 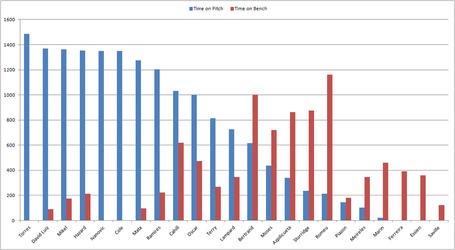 That Roberto Di Matteo has settled fairly quickly on a pretty consistent first-choice starting 11 is either a blessing or a curse. The verdict on that changes daily. I do wonder if Oriol Romeu has started receiving any post mail at his address on the Chelsea bench just yet. 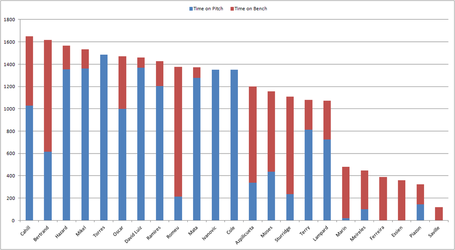 Interestingly enough, Gary Cahill has been the most "active" player, having spent the most minutes of anybody either on the pitch or available to sub from the bench. In fact, he's been active for the entire 1650 minute totality of Chelsea's season so far, spending 620 of those sitting on the bench ready to play and 1030 actually playing. 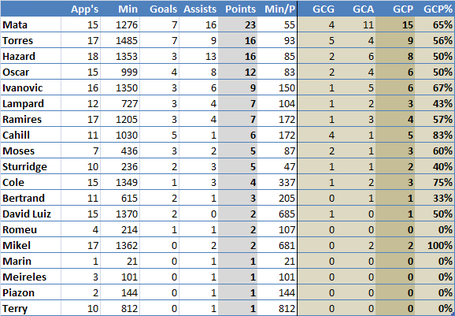 Juan Mata is awesome. As if that needed reiterating. Daniel Sturridge has had plenty of impact as well in his limited appearances - his minutes-per-point ratio is only bested by that elusive beast that is Marko Marin who did manage to get involved in a goal in his 21 minutes of total pitch-time so far this season.

Gary Cahill certainly likes the big occasion: 5 of his 6 points came in game-changing situations - that is (pop quiz!), they either gave Chelsea the lead or drew Chelsea level from having been behind.

One final word on Juan Mata who led the team last season with 46 points (54 appearances). He's been so exceptional that in just a quarter of the season - 15 appearances - he's already reached half of last season's total and is easily on pace for over 20 goals (so is Torres!). After not having a single 20-goal scorer the last two seasons, Chelsea may yet end up with two just like in 2009-10.