Chelsea managed to get the job done against Shakhtar Donetsk thanks to a last-minute header from substitute Victor Moses, but to say that the visitors were hard done by in losing is something of an understatement. The Ukrainian champions played very well, keeping Chelsea on the back foot for much of the match and twice recovering from goalkeeper errors to peg the Blues back.

Tactically, this was 4-2-3-1 against 4-2-3-1, but Mircea Lucescu's implementation of the shape was very different to Roberto di Matteo's system. Here's how the two sides lined up: 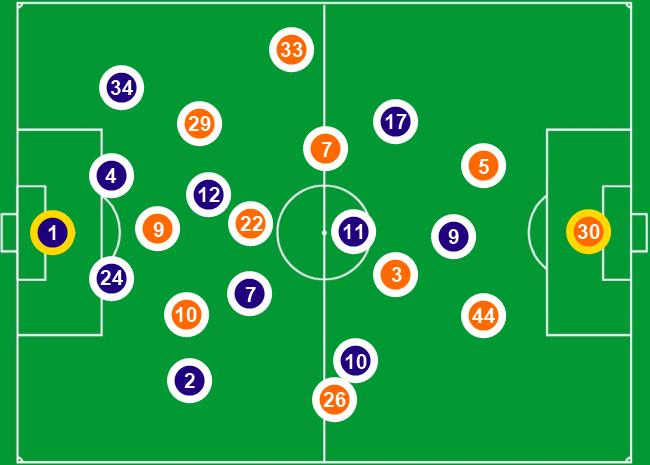 Chelsea went with an extremely narrow back four, screened by the John Obi Mikel-Ramires double pivot. Their third band was the now-standard troika of Eden Hazard, Juan Mata and Oscar, with the latter in the centre and the other two (theoretically) on the flanks.

The visitors, meanwhile, showed Chelsea how attacking fullbacks are really done with Razvan Rat on the left and the brilliant Darijo Srna at right back. That pairing played so high up that they might as well have been wingbacks, which led to an interesting attacking shape which saw the nominal wide midfielders (Alex Teixeira and Willian) cutting inside and Tomas Hubschman serving as a true holding midfielder despite being in the double pivot. The centre backs spread very wide to cover the spaces behind Rat and Srna.

None of Shakhtar's tactical setup was a surprise. They've always been a team hugely reliant on their fullbacks, especially Srna, and it's always been entirely obvious that preventing them getting forward was the key to shutting down the visitors' attack. From Chelsea's perspective, it would have made a great deal of sense to either field a defensively inclined player on the left or to play a dedicated touchline winger. Playing the Hazard-Oscar-Mata trio simply fed straight into Shakhtar's hands.

Even on fast counterattacks, Chelsea were mostly stonewalled. With Yaroslav Rakitskiy and Olexandr Kucher as spread centre backs and Hubschman against a central four of Fernando Torres plus the three Mazcateers, the centre should have been open for the Blues. But it wasn't mostly thanks to the work of Fernandinho, who put in a magnificent display in the middle of the pitch, tracking back with lighting speed to ensure that Shakhtar always had numbers in the middle.

But even Fernandinho's contribution was eclipsed by Kucher, who won the ball an astonishing 11 times (eight tackles and three interceptions). Chelsea, meanwhile, had a standout defensive performer of their own in Ramires: 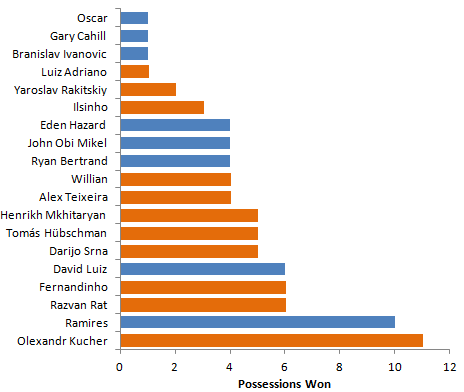 Ramires and David Luiz combined for 16 tackles and interceptions between them, according for more than half of Chelsea's possessions won. Shakhtar, meanwhile, had 31 tackles and 21 interceptions -- that's 71 percent more than the Blues managed (and without the contributions of the arforementioned Brazilians, it would have been 246 percent!). Small wonder that it looked like they always had the ball.

Part of the season that the visitors were so good at winning possession was the heavy press that they employed. As soon as the ball moved out of the defensive band -- even if it was just a pass forward to one of Mikel and Ramires, Shakhtar pounced. This is what Chelsea struggled with in the first half, with Mata and Hazard especially suffering as they attempted to push forward.

And that's also the reason that we looked so much better towards the end of the match. The press is often considering to be a risk-free strategy. It's not. Firstly, it's seriously tiring, and Shakhtar were only capable of keeping it up for about an hour before they caved in an let Chelsea have the ball uncontested. Secondly, attacking the ball is dangerous -- we've all criticised David Luiz for going in too aggressively on the tackle before -- and making a mistake while pressing can sometimes lead to the field opening up. Most of the Blues' best chances early came from a player using his technical ability to avoid an incoming tackle and rush forward.

The first two Chelsea goals weren't particularly worthy of analysis. Andriy Pyatov kicking the ball right into Torres' foot was funny, but not really reflective of anything more than a stupid error on the part of the opposition. The second was nothing more than a quite brilliant a freak goal, although Mata's first time ball was excellent. Victor Moses' winner, however, might be worth a few words.

Much has been made of late of the purported weaknesses of zonal marking, with professional pundits falling over themselves to criticise the likes of Arsenal and Manchester United using the scheme on corners. Here, however, we saw the issues with man-marking. Pyatov aside, Shakhtar had done reasonably well defending corner kicks up until the 93rd minute, but when Oscar was pulled off and Moses deployed, nobody knew who was assigned to pick up the substitute (Oscar is, obviously, not an aerial threat worth tracking on set pieces). Which is why the Nigerian was unmarked.

Shakhtar's goals were, in general, the result of Roberto di Matteo's tactical choices. Playing Eden Hazard on the left gave Darijo Srna the freedom of London, and it was from the Croatian that all of their most dangerous play stemmed from. That much will have been profoundly obvious to anyone who watched the match. But Hazard not closing down a marauding right back isn't a surprise, and the Belgian was actually a little better at dealing with Srna than I was expecting. The decision was made to allow the visitors' fullbacks upfield; what needed to happen afterwards was sensible defending on the crosses.

By and large, the central defenders did their jobs. Luiz Adriano was subdued throughout, and it never looked as though Petr Cech's goal was really at risk when Shakhtar attacked Cahill and David Luiz directly. Instead, it was cutbacks to Willian and Mkhitaryan that were the really terrifying threat, especially because nobody was picking them up. Here's Willian on the first goal.

...and on the second, both Willian and Mkhitayryan are free:

Chelsea have shipped an absolutely stupid number of goals from low crosses or cutbacks from the byline, and it's about time that the problem was fixed. In most circumstances, this isn't the direct fault of the defence. Ideally, the crosses would but cut out at the source, but that's not always going to happen, and it's the centre backs' responsibility to get back to the goalline and help Cech defend against high crosses.

In a 4-2-3-1, cutbacks should be dealt with by the two deeper midfielders, and Ramires and Mikel simply aren't doing their job at the moment (Lampard's positioning on crosses is much better than either, incidentally). Instead, they're tracking runners very deep into the Chelsea area and not covering the real danger. David Luiz and Cahill can and do deal with their immediate opponents, but the midfielders end up trying to support their centre backs and leave the likes of Willian free at the top of the box.

Ultimately, Chelsea took on a very good team and despite several setbacks (some of which were self inflicted) managed to get back into pole position to qualify from Group E. There are some lessons to learn, especially for the midfielders, so let's hope that di Matteo and company take said lessons seriously.