Danish champions FC Nordsjælland are a bit of an unknown quantity, but their possession based game will provide an interesting challenge on Matchday 2 of Chelsea's quest to defend their Champions League trophy.

At the draw for the Champions League group stage, a lot of the focus was on the Group of Champions containing Real Madrid, Manchester City and Borussia Dortmund, but many failed to notice there was another Group of Champions, containing the winners from Europe, Italy and Denmark. The latter might not be one of the higher ranked leagues in Europe, but domestic champions FC Nordsjælland are Chelsea's next opponents in their quest to defend their Champions League trophy and present their own unique challenge.

Now, I'd hate to pretend I have any in depth knowledge of the Danish league, but after Chelsea drew the "Wild Tigers" I was immediately interested to see what we would be coming up against. You can read up on Nordsjælland's fascinating history here but for the purposes of this piece, I'm going to focus on their tactics. On that point, I've enlisted the help of two analysts from Football Radar who both cover the Danish League for the football analysis and statistical modelling company: Rasmus Bonnerup and James Saady. Both collaborated to provide me with some great information, so this scout report is indebted to their contribution.

But now onto the possible lineup, or rather, the lineup that Nordsjælland deployed for their last match against Shakhtar, which incidentally was the same side that played against Esbjerg on the weekend. 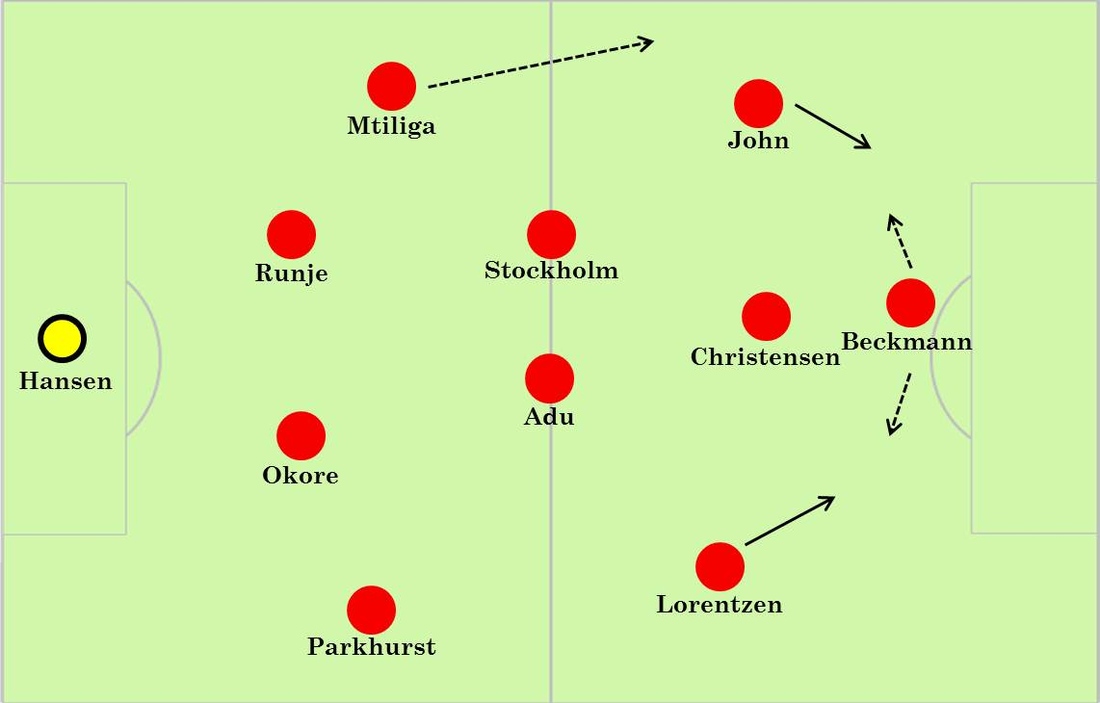 This squad is led by the relatively young face of Kasper Hjulmand (40 years old), who became the first ever Danish manager in the Champions League on Matchday One. Hjulmand is inspired by the work of Pep Guardiola and Marcelo Biesla, and aims to instil that pressing/passing philosophy upon the team. However, Nordsjælland's philosophical roots stretch back to 2005 when current Denmark U21 manager Morten Wieghorst was appointed. Wieghorst left in 2011 after successive Danish Cup triumphs, but Hjulmand continued the good work with the club's greatest triumph last season - holding off traditional powerhouses FC Copenhagen (whom Chelsea fans will remember from the knock-out stage of our 2010-11 campaign) to win the league for the first time in their history. Roberto Di Matteo and Hjulmand should get on well, both having been promoted from assistant to full time manager and won a trophy as a result.

Nordsjælland play in a fairly basic 4-2-3-1, but their strategy is far more refreshing, based on possession and fluidity. They are often accused of being naive, and Hjulmand is a stubborn manager unwilling to compromise their attacking style of play, so it is unlikely they will change from this template even when up against a team as strong as Chelsea. Against Shakhtar, they played in their traditional style, and the Ukranian champions scored two on the counterattack for an ultimately comfortable victory.

Nordsjælland's system revolves around the interchange between attackers and quick short passing in the final third. While Morten Nordstrand was signed in the summer to play as a static centre forward, the more likely option is Mikkel Beckmann, who interprets the strikers role very differently - he drifts to the flanks, particularly the left, dragging defenders away and creating space for the attacking trident to exploit. Beckmann's movement is clever and brings others into play, most notably loan signing Joshua John, who has scored eight goals in eight games since arriving from FC Twente. Beckmann also takes the majority of set pieces, especially direct free kicks.

Behind him is Soren Christensen, who has moved higher up the pitch this year after playing as the more creative of the double pivot in their league-winning season. Christensen is a calm passer, and generally holds his position while Beckmann, John and Kasper Lorentzon switch positions. Lorentzon nominally guards his left flank, although his position could be under threat from Andreas Laudrup, the son of Swansea manager Michael Laudrup. Laudrup was a substitute in the second half against Shakhtar, who in the words of his father, "likes to come in from the right because he is left-footed." However, Lorentzon scored in a 3-0 victory against Esbjerg on the weekend and it seems likely that Hjulmand will stick with the same attacking formation that linked up well against Shakhtar, despite their eventual defeat.

Behind them is the controlling midfield duo of Nicolai Stokholm and Enock Kofi Adu, who generally stay in position as a platform for the rest of the side. Adu is a young talent who played very well against Shakhtar: he understands his function as a distributor to his more technical teammates, constantly looking to play quick, short passes. This clarity is crucial. Beside him, Stokholm is the captain and plays a similar role, and the partnership between the two is equally outstanding (they recorded the highest pass combination in the Shakhtar game).

In the words of Rasmus, Stokholm "often goes down as a sweeper when the team is starting an attack which makes more room for the other central players" - on occasion, he will drop in between the centre backs and split the back four into a back three. That behaviour is crucial to allowing the fullbacks to go forward, as both Patrick Mtiliga and Michael Parkhurst make storming runs down the flank to support the wide forwards, who cut inside to open up the space on the outside. Their attacking intent can be demonstrated by the average position diagrams from Matchday One.

Mtiliga in particular links up well with John, their partnership similar to that of Leighton Baines and Steven Pienaar for Everton. They play a similar role to that of Chelsea's Ashley Cole and Branislav Ivanovic, and it will be interesting to see how aggressive the Nordsjælland fullbacks are against their equally aggressive opponents. Pushing onto the space behind them will be a vital component of Chelsea's game plan. Darijio Srna for Shakhtar countered Mtiliga's threat by playing high up the pitch and forcing him back, and Ivanovic (or Azpilicueta) would have the ability to do the same.

The attacking nature of this side often leaves the centre backs exposed, and that is where the loss of Andreas Bjelland last summer is significant, as the Dane was imperious in his side's title charge. However in his place youngster Jores Okore has stepped up to the challenge fantastically and he was amongst the better players on the pitch against Shakhtar despite being the youngest player on the pitch. His partner Ivan Runje is similarly young but also being entrusted with a major responsibility at the park. Runje was less impressive when I saw him as he was often caught high up the pitch, and as Nordsjælland naturally play with a high line the space in behind the back four could play into either Fernando Torres or Daniel Sturridge's hands. Furthermore, as a byproduct of their strategy, Nordsjælland press high up the pitch, although they are also comfortable dropping off into a 4-2-3-1 shape and taking turns to press the man in possession.

Such is their commitment to their enterprising style of play, Nordsjælland are relatively easy to pick out on the counter attack as Shakhtar did to good effect. The away side dominated much of the ball in that game, but as we all know, possession doesn't win you football matches. Chelsea will in all likelihood rest some key players with an eye on the Premier League, but potential replacements such as Victor Moses, Marko Marin and the aforementioned Sturridge are all at their best breaking into space at transitions. Nordsjælland's commitment to their style of play is admirable, but Chelsea should be too powerful on the break for them to handle.