Word has begun circulating that Chelsea are expected to close the signing of Gary Cahill in the next 48 hours. More, after the jump: 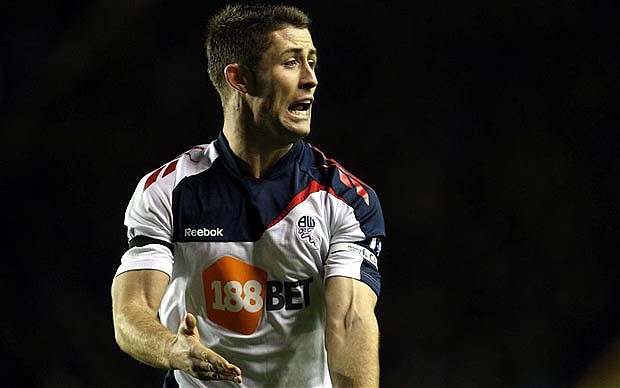 So, this one looks like it'll finally be finished. The worst-kept secret of the winter is coming to its final hours, after an apparent break-through in negotiations took place Sunday evening, during which Chelsea representatives were able to reach a consensus with Cahill's agent. Initially, Gary asked for a six-figure wage packet, as well as assurances regarding his place in the team, as well as further financial incentives regarding performance and his potential for being a part of the English set-up this summer. But at last, there appear to be signs that this one is slated to be completed- with some Twitter reports offering that Gary has been booked in for his medical at Stamford Bridge Tuesday afternoon. Either way, all news outlets are confirming that this deal will be finished in time for Cahill to be selected for the weekend's Sunderland fixture. Good stuff.

Elsewhere, and mind you this one came completely out of nowhere, the Blues are poised to sign Nigeria Under-20 International defender Kenneth Omeuro from Standard Liege. The deal, which is also close to completion, will involve Omeuro going immediately out on loan to Dutch outfit ADO Den Haag- until the end of the 12/13 season. At 18 years of age, Omeuro is a highly-rated center back prospect. I'm quite tired of writing about these youth prospects that we keep pursing and capturing, but hell, if that's what the club is doing then so be it. Scribe about it, I shall. So, with two deals in under a week of the market being open, and both being for defenders, you'd assume we'd be moving our attentions to other parts of the pitch, right?

It appears that AVB's master plan for rebuilding the squad also involves acquiring a right-back to cover our creakiest position in the wake of Bane's untimely injury. Though limited news can be offered on who we're targeting, reports are suggesting the club are keeping tabs on a number of prospects from around the continent. Time will tell if a deal can be put in place, I'm guessing it can certainly happen, but it's simply a matter of finding a quality player for the position. It does beg the million dollar question though- if a new RB is purchased, then what happens to Ivanovic? Does he slide to the center next to JT? If that happens, then what about Gary and Bob? Oh dear, it's all starting to get messy in my brain.

We already know that young Jedi Joshua is going on loan, as well as Gael Kaks and possibly Romelu Lukaku. What we don't know, however, is where Alex is going to end up. QPR had made enquiries in December, but AVB adamantly refused to sell the Brazilian to a Premier League opponent. It's more likely that Juventus take up their long-standing interest and close the deal. Also, and get this, Arsene Wenger looks poised to grab from the coffers while the getting's good, with a rather cheeky 3 million quid offer for Sala Kala. It's been confirmed that Kalou has returned to London from training camp with the Ivory Coast to open talks with Arsenal about a possible move. Of issue, clearly, is his almost 90,000 a week wage demand. Yeah, I really don't think Arsene is going to pay a nickel over 40,000. Just saying.

Still no news on any incoming creative types. I know I know, it's early days in the window. However, there is the reports that we're hot on the heels of Lucas Moura. But then again, our luck is a bit poor when it comes to chasing these young Brazilians to the signature. I'm not holding my breath, but should a deal close, then, well, shit. That's a month right there that'll live in infamy. I'm not kidding friends. Moura is the absolute truth.

That's all I have for now. Stay tuned and we'll update you on whatever else breaks. Carefree.