Share All sharing options for: Hamsik open to bringing his game, epic hair to Stamford Bridge?

Creative midfielders. We've talked about the need for one at Chelsea at length over the past several months. Napoli's Marek Hamsik definitely fits the mold of what we should be looking at. Plus, he's got the hair. That shit is seriously epic - in either a good or hilariously bad way depending on your take.

If only he were on the market, though. Wait a tick, he just might be. 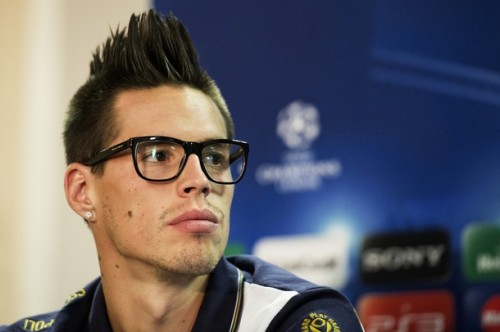 His agent, Mino Raiola, has been speaking publicly (shocker) about his player's future this week. Raiola revealed that his client would not overlook the opportunity to join another side, with three clubs distinctly named during his interview with Radio CRC.

If Napoli were to receive an offer from Barcelona, Chelsea or Real Madrid, then it would be logical to accept.

That revelation is a far cry from the stance Hamsik was offering earlier in the week.

I am very happy in Napoli. Every player plays to win - I have not won anything yet and I miss it - but Napoli are doing everything possible to win something.

Of course, this isn't a definitive answer on his future. We have no clue if Hamsik is ready to leave Napoli or not. What we can assume is that this more likely than not is a media shout from an agent trying to get his player as much dough as he can;  Hamsik is currently discussing a contract extension with Napoil. However, if he indeed is open to a move to Chelsea then the club need to jog on over to Italy and have a talk with the club and the player's representatives.  Our midfield is crying out for a player of his ability to come in and light it up.