Share All sharing options for: On Chelsea's "Aging Squad"

On Sunday, Chelsea transfer target Eden Hazard made it clear that he was planning on moving to England in the summer. The top five teams in the country were mentioned, and there's a very good argument to be made that the Blues are the best fit in terms of both playing time and ability to pay the young Belgian. When Hazard was discussing his options, Chelsea were specifically brought up twice - once when Christophe Dugarry said 'I bet it's Chelsea' and the second when one Pierre Menes apparently said 'Don't go to Chelsea; it's an aging, slow team'.

Mr. Menes's comments didn't strike me as particularly fair. I guess that describing the squad as aging is techincally true - every member of the team is getting older - and I might accept old team, but Mr. Menes seemed to be claiming that the team age was increasing, and I wasn't entirely sure that was true.

So I went and looked. While people tend to claim that squad age is simply and average of all the players' actual ages, that's kind of a silly measure, because (Andre Villas-Boas, I'm looking at you) you can have, say, two 18-year-olds on the bench and never play them. Instead, I decided to use a slightly more sensible approach. Using EPL Index, I grabbed the minutes played by each player between the 2008/09 season and the current campaign, then did a weighted average based on each player's age at the start of the season.

Here is what I ended up with: 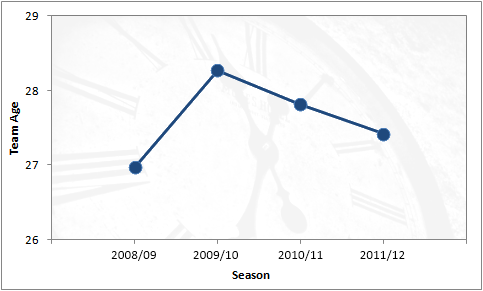 Aging? Clearly not. While Chelsea still aren't as young as they were four years ago, they've cut down 310 days from the average age of the double winners (28 years, 99 days). If they'd done nothing since then, Chelsea's average age this campaign would be over 30. Instead, we're at 27 years, 153 days. That figure is only set to decrease with the expected departures of some of the older members of the squad this summer.

While the individual players might be aging and Chelsea might be overly reliant on a handful of relatively old players, the squad's gotten younger in a hurry since they won the double. Some of this work was done by Andre Villas-Boas (including Oriol Romeu and Daniel Sturridge in the regular starting lineup has helped), but a lot of the heavy lifting was done under Carlo Ancelotti's tenure when Michael Ballack, Deco and Ricardo Carvalho were sent away.

I don't really have the patience to do this for other teams as a comparison, so I'm not going to say Chelsea are a young team or anything (obviously I don't think they are), but since 2009/10, they're definitely on the right track, and I wouldn't be surprised if they had an average age of close to 26 next season.

Anyway, the next time someone tells you that we've got an aging squad, show them this. We don't.

PS: While writing this post I found out that Andriy Shevchenko played three minutes for the double winners. I have literally no recollection of this.