Share All sharing options for: JT to Miss Swans Clash

After getting thru the anti-climax that was QPR, Chelsea have announced that John Terry will miss the trip to the Liberty Stadium, coincidentally in line with the week his trial for racial abuse commences. More, after the jump: 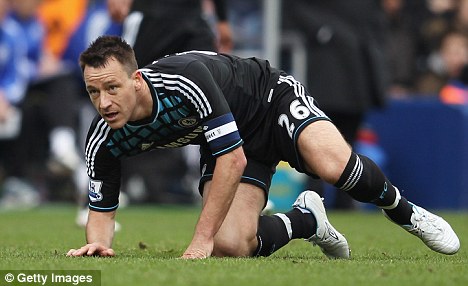 In a late-night conversation with The Doc, we both agreed that John could profit from a stretch of rest. According to the official team news, John aggravated a minor knee injury in the first half of the QPR match, which has troubled him for some time now. Therefore, the decision was made to give him a chance to rest his aches and pains, while his team of barristers get to work on starting and concluding his court case. I think we can all agree, that we saw this one coming a mile away.

Chelsea insist that JT has been suffering from fluid build-up in his knee since colliding with the goalpost during our January 8th encounter with Portsmouth. However, this injury setback is not expected to keep him from our mouthwatering Manchester United showdown on Sunday. Quite the contrary. He'll be laced up and ready to not shake Rio Ferdy's hand. Or he will. You just don't know these days do you.

Look, there's no scandal or drama here as far as I can see. John's older, he needs rest in between matches, and them bones aren't as strong as they used to be. It's unrealistic for him to play three matches in 9 days, but he could do it if absolutely necessary. But we honestly don't need him to- seeing as how we have a newly minted Gary Cahill in line for his first ever start in the blue stripe.

Plus, who honestly doesn't expect John to be at Cobham during the match, greeting all our new signings during the deadline hour and making random appearances on ChelseaTV? I do. I surely do.