Kevin de Bruyne Undergoing Medical Ahead of Transfer to CFC

Share All sharing options for: Kevin de Bruyne Undergoing Medical Ahead of Transfer to CFC

Multiple outlets are carrying the story that Genk starlet Kevin De Bruyne is at Cobham undergoing his medical ahead of a 9 million quid transfer to the famous CFC. More, after the jump: 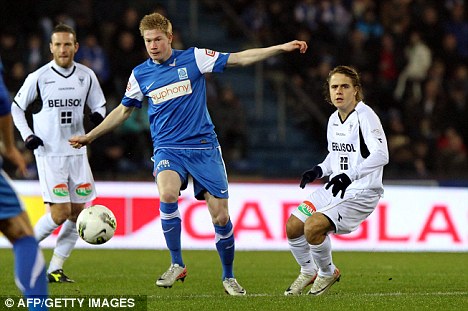 You already know the drill. KdB will come to Chelsea this summer, after finalizing paperwork tomorrow which sets his price and contract in place. The deal is for a rough 9 million, with the player signing a 5.5 year contract. He'll head back to Genk and complete his season, and join the ranks this summer- at which point many anticipate he'll be doing a 'Courtois' and heading off on a season-long loan.

Andre's gone to lengths to say he's not a player he wants, per se, but underlines his potential and recognizes the quality inherent in KdB's abilities. With Ramires ruled out for a month, Frank on the table, and Obi Trice no where in sight, I think the matter of finding midfield cover, considering The Bison has yet to reach his peak, is more apparent than ever before. I'm all for adding KdB for the future, but we really need to get some closure on our other targets.

That said, welcome to London Kevin. See you next semester.