QPR 0-1 Chelsea: Handshakes called off, so too was the entertainment apparently

Share All sharing options for: QPR 0-1 Chelsea: Handshakes called off, so too was the entertainment apparently

It wasn't pretty. Hell, it was downright hideous. But it's a win, one that puts us in the fifth-round draw. Hey, that's good enough for this guy. 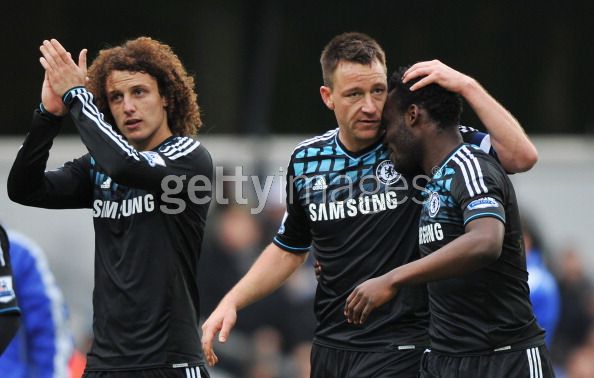 I guess we should have expected this. All the hype, all the controversy - it simply overstated what was bound to be on display at Loftus Road on Saturday. Still, one would have expected Chelsea to at least carve out something more concrete than a shoddy penalty decision.

Fortunately, our lax performance could be attributed, at least in small part, to the general egregiousness of Queens Park Rangers. They really couldn't have been much worse. Joey Barton and company spent the better part of 90 minutes watching us do all the work. The visitors might have been disciplined in their approach, but they never carried any semblance of a threat - at least not until the final minute of the contest.

How poor were they exactly? So poor in fact that their own support began forgetting to boo John Terry when he was in possession. Yeah, it was that dull.

Still, that's no excuse for our performance.

The opening 45 minutes featured nothing. I'm telling you, nothing. Wait, there might have been one instance of incident, with Juan Mata - our sole source of creativity in the first half - kind of testing Paddy Kenny inside 12 minutes. Yet even that scoring opportunity surfaced thanks to a bit of poor play from QPR, in particular a slip by Luke Young.

We improved after the interval, but it was hardly anything to spring one from their mid-morning nap. It was nice, however, to see the intensity ramp up and a few chances present themselves. Mata continued to probe, while Fernando Torres began to bring forth the incisive movement and skill. He was again resigned to playing more of a creator, but, as has been the case of late, he seemed to sack it up and revel in the role - even though we know he has to be frustrated.

Mata created an opening before Torres set up the the largely ineffective Daniel Sturridge, who lashed a first-time effort high and well wide. Then came the penalty decision. Sturridge hit the deck with Oscar-worthy aplomb under a light push from Clint Hill. It was a soft penalty award. Charmin soft. No matter, though, we'll take it however it arrives, particularly after the lack of luck we enjoyed at Loftus in October. Mata stepped to the spot, sending Kenny the wrong way.

That was the cry from the home support. How ironic.

Rangers found a second gear - though that only meant we were a class or six above them on the day - but still struggled to create anything in the attacking third. Ramires was a casualty as QPR pushed forward, suffering an injury to his MCL after falling awkwardly while blocking a shot from Hill. It wasn't until about eight minutes into stoppage time that Rangers unsettled us again, Young nearly atoning for his first-half slip with a rocket toward the back post that forced Petr Cech into an excellent stop.

Hearts were in mouths. Thankfully, that was it in terms of threat and we held out for a deserved win. The fifth-round draw is to be held tomorrow. It would be nice to avoid Liverpool. Perhaps a matchup with Gus Poyet's Brighton will be on the menu. For now, let's celebrate today's victory - a forgettable one no doubt, but a win regardless.