Ramires suffers MCL injury - does not look like a severe tear

We of course don't have the official prognosis yet, but on the strength of quotes from both the player and Andre Villas-Boas it looks like we may have dodged a massive bullet. 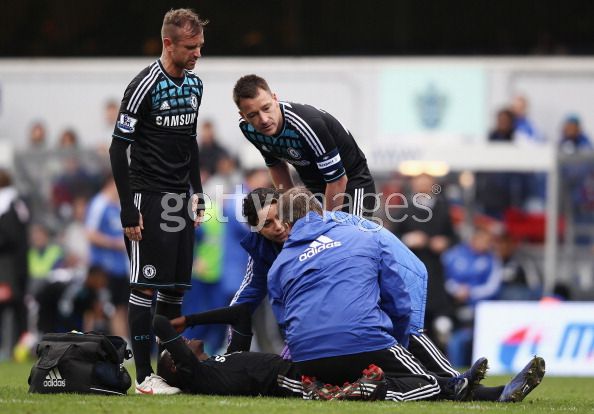 Ramires went down in serious pain during the second half of today's FA Cup fourth-round tie at Loftus Road against Queens Park Rangers. The Brazilian, largely considered one of our best players this term, went to block a shot from Clint Hill and as doing so, fell awkwardly. What initially looked like a twisted ankle, or something potentially worse, actually turned out to be a twist to the knee.

Ramires spent a good five minutes receiving attention before being stretchered off. I was sick, you were sick. We all were sick in assuming the worst. As is stands, however, it looks like the injury may not be as disastrous as first feared.

Villas-Boas revealed in his post-match press conference that our combative midfielder had suffered a medial collateral ligament injury, the severity of which was not yet known:

(Ramires) looks like a medial ligament injury, not so bad in terms of knee injuries. He will have an MRI tomorrow and we will know the full extent. Hopefully he will avoid an operation and be back soon. We could look at four weeks, but we have to know the extent of the injury to give a good assessment.

Though I was still worried about the extent of the problem, a sigh of relief swept over when I read this. I had assumed we were looking at an anterior cruciate tear when I first heard the rumor that it was Ramires' knee. An MCL injury is still significant, but not nearly as damaging as the ACL.

And then there were quotes from the player himself, which further quelled my nerves:

The ball hit my foot with force and twisted my knee. When I fell on the floor I was already feeling a lot of pain and thought it was something really serious. However the doctors looked at it and said the medial ligament in my knee was stretched, but it's not broken. Tomorrow (Sunday) I will have a more detailed exam to find out what really happened, but I believe and hope it's nothing serious. I was feeling good in the match and unfortunately this accident happened.

Stretched, but not broken. Curious dialect, but a significant piece of news nonetheless. That basically means we're looking at a Grade I-II tear, which would, in an ideal environment, put Ramires on the shelf for no more than four weeks. That is still a blow for the club, with February featuring matches against the likes of Manchester United (h), Swansea City (a) and Napoli (a), but it's far better than hearing that your most consistent midfielder is out for the season.

Obviously we'll keep you posted as we hear more on Ramires' condition. And here's to wishing him the best in recovering, whatever the timetable.