Whoa. I forgot we were still involved in the CL for a second. More, after the jump: 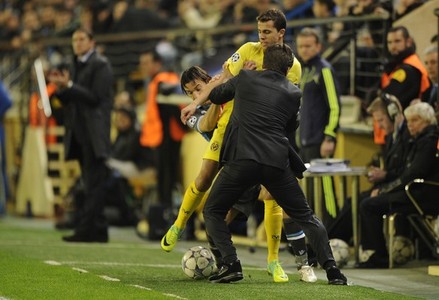 The Shove Heard Round Naples

Get this: Napoli's manager, Walter Mazzarri, has been banned by UEFA for two matches after shoving Nilmar during Napoli's final group stage match with Villareal. So, the man essentially responsible for turning the Naples outfit into a well-oiled, counter-attacking machine will not be on the touchline during our two-legged tie. Color me excited! Well, I mean, yes, it's great that he'll miss out from our viewpoint, but, then again it might just buoy the Naples squad to play harder.

Elsewhere, it's been documented that the club are offering not only Alex to PSG, but also soon-to-be-out-of-a-contract Jose Bosingwa. Apparently, we've sent a message along to Carlo and Paul Clement that we're willing to listen to their best offer. Problem is, they don't seem particularly interested in his services. So, we face the very real prospect of losing JB on a free this summer. Can't really understand why Carlo wouldn't bite though- PSG are sorely lacking in help in the right-back slot.

Willian, aka Will.i.An, is now talking up the very real prospect of moving to London next week- to every newspaper with a pulse. Apparently, our Brazilian contingent (Bob and Ram) have been selling him on the idea of plying his trade in the UK. Their pitch? AVB is trying to build a young core nucleus of players that can grow and mature together, and he would be yet another piece to that proverbial puzzle. So, it would seem, that this deal will happen sooner rather than later. Already, Shakhtar have made the very unorthodox move of declaring publicly the bid received from Chelsea, taken to their website to explain the value of the player, the prospect of selling him, and the solid working relationship shared with Chelsea. Roman has a good relationship with Shakhtar's owner (they share business interests in the former USSR), and the player has expressed his desire to leave- with Shakhtar willing to facilitate the transfer. All that's left is a price then.

Kevin de Bruyne? It'll happen too. Just trust me on this, it will happen.

The players have returned from Majorca, and I have to give them tremendous props for not getting into even a sniff of trouble. Seems four days of sun was good enough to recharge their batteries and get them excited about the impending war with QPR on Saturday. I, for one, am just thrilled about the very real prospect of watching John go studs-up on Anton, while Fernando waxes lyrical in front of net with a four-goal salvo for good measure.