Are Chelsea back in for Kevin De Bruyne?

Share All sharing options for: Are Chelsea back in for Kevin De Bruyne?

Not entirely sure about the source material, but Chelsea have allegedly re-engaged in talks with Racing Genk over the transfer of the 20-year-old that looks not a day over 12 - Kevin De Bruyne. 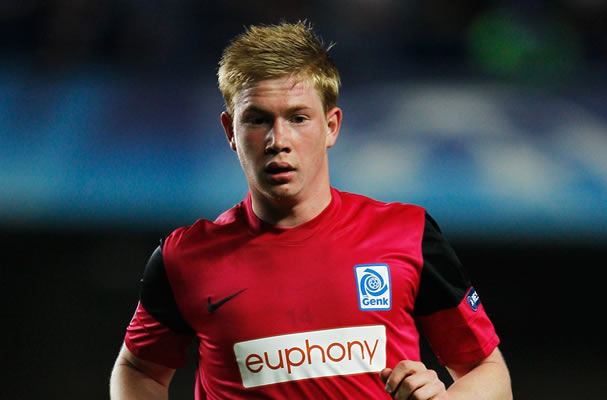 As you may recall, the club inquired about De Bruyne in the summer. Nothing was agreed upon at the time, but it always seemed likely that the two parties would eventually make a deal happen. De Bruyne reentered our psyche at the beginning of the month with a few choice quotes about the summer and the possibility of a move in January.

And now we have this, via Het Belang Van Limburg. Here's a rough translation via Google:

The transfer has often announced Genk Player Kevin De Bruyne (20) to Chelsea, it seems one step closer to his. Yesterday CEO Dirk Degraen traveled to London to discuss a transition. Until a formal agreement was not taking it.

According to British media, De Bruyne for Chelsea especially an option for the future. As Thibaut Courtois, he would therefore first be lent. De Bruyne would also present the perfect season with KRC Genk. The transfer amount is estimated at 9.6 million euros.

Like I said, I'm not sure what to make of this but what I can tell you is that it seems plausible. And that I like the terms being murmured. The fee (9.6 million euros) translates to about £8m, which is probably a solid deal from our perspective; loaning De Bruyne back to Genk for the rest of the season is clearly the best option for both us and the player.

Actually, I wouldn't be surprised if he were loaned next season as well. While extremely talented, De Bruyne is still far off the finished product. Regardless, I think this represents good, long-term business by the club - that is if it's true.