Talks with QPR break down, PSG now favorite for Alex

Share All sharing options for: Talks with QPR break down, PSG now favorite for Alex

Queens Park Rangers apparently can't afford Alex. Paris Saint-Germain, meanwhile, certainly can. I guess that solves that then, in my skewed mind at least. 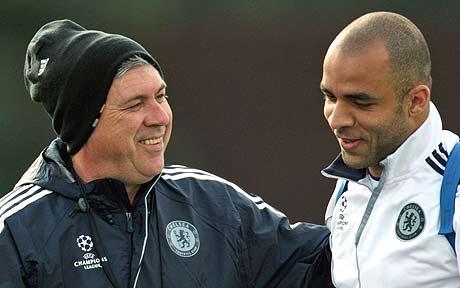 The protracted transfer of Alex away from Chelsea drags on.

News today arrives in two parts. The first concerns the dealings of fellow London boys QPR. Negotiations appeared to be at such an advanced stage between the two clubs that Alex was allowed to discuss personal terms with Rangers. It appeared only a matter of time before the two flushed out a deal and the Brazilian central defender was allowed to move across town. Not so fast.

Discussions have broken down according to a gaggle of media outlets, with QPR unwilling - or unable - to meet Alex's wage demands. The 29-year-old is on around £60,000 per week, thus it's kind of understandable why a relegation-threatened side would be apprehensive to meet such a number.

This is good news if, like me, you're of the opinion that the club should not be moving former players inside its own league (although I wouldn't have complained). Then again, you may have cared less where Alex ended up so long as he was moved out of town before the end of January. Thankfully, the club may be able to satisfy both parties.

Paris Saint-Germain have apparently moved to the head of the queue to ink Alex. PSG sporting director Leonardo confirmed today that the French club is indeed interested in the defender. This according to L'Equipe (via Goal):

Thiago Motta and Alex? For both, there is a possibility. But for now, nothing is done.

This looks like a great move for all interested parties. Reuniting with Carlo Ancelotti would seem, at least on the surface, to be good for Alex. He'll also be able to pocket a hefty sum from the newly mega-rich side. PSG, being a mega-rich side, can afford to throw us a nice transfer fee in return. Hopefully it will be more than the £4 or so million Rangers were willing to shift over.

So, let's get this wrapped guys. I don't think we really want to move forward into February with Alex, despite all his likability, still on the books.