Breaking Down Lampard's Goal vs Sunderland

Share All sharing options for: Breaking Down Lampard's Goal vs Sunderland

Chelsea grabbed all three points against Sunderland but the performance was less than convincing. The attack, yet again, found it hard to break down defensively tough opposition, while the defense still crumbled under any kind of pressure.

At any rate, Chelsea did find the winner via Lampard tap in. The attacking phase for the goal was started by a good defensive play by Terry. And it was another patient/slow (pick according to your taste) build up -- ball moves from left to right, right to left, left to center, center to right and so on. Here is a close look at the build-up play to the goal. 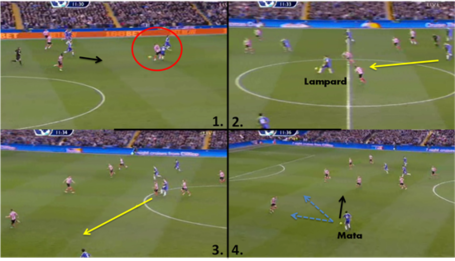 [11:31] Romeu collects loose ball and passes to Lampard at the center circle.

[11:33] Lampard receives the ball and lays it off to Mata on the left.

[11:36] Mata begins to dribbles towards the center.

It is interesting that Mata opted to carry the ball inward because there is more space on the left than on the right which is crowded with Sunderland defenders and three Chelsea players. He could try to take on the Sunderland fullback who was somewhat isolated but he chose not to. This is something that Mata did continually in this game.

Back in the Ancelotti days, Malouda in this same position will probably dribble towards the Sunderland fullback and wait for Cole to come bombing forward for support. Cole did run up the left flank and overlaped Mata but the Spaniard didn't wait for that. He went straight to where there were bodies. We know he tends to drift toward the center but he took it to the extreme against Sunderland. I suspect that Villas-Boas wanted to overload on the left side of Sunderland's defense. 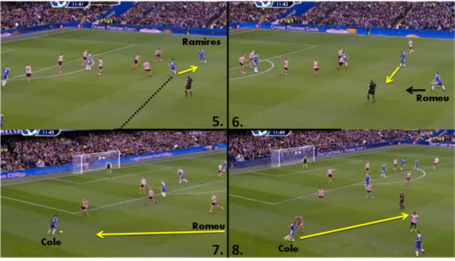 [11:50] Cole passes the ball back into the middle towards Meireles.

So, Mata moves to the right and leaves a ton of space for Cole. But when the ball finally circulates back to the left flank, where the Sunderland fullback was isolated yet again, Cole decides to knock it back into the middle.

This is where Cole's shortcoming as an attacking fullback comes to surface. He found himself one-on-one with an opposition but he didn't attempt to beat him either by trickery or speed. If this was on the other side of Chelsea's attack, you can be pretty sure that Bosingwa will drive down the lines and try to get a cross in. I know high crosses have not worked well this season but at the time when Cole could have crossed the ball, there were four Chelsea players in the box -- a prime time for a teasing ball.

To be fair to Cole, he is never the type to engage the opposition player directly. He's more of a tap-back-and-run-really-quick-to-get-past-defenders kind of attacking fullback. Even if it is not his fault that he doesn't try to beat the defender one-on-one, maybe Chelsea needs a different option down the left flank. And by the way, Cole took the most time on the ball, 5 seconds, out of all the players involved in this attacking move. 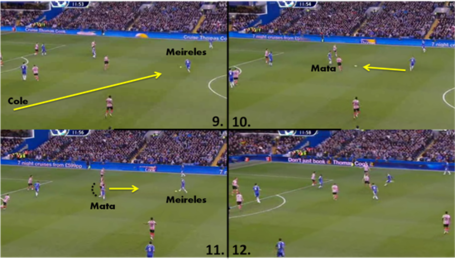 [11:54] Mata taps the ball back to Meireles straight away and moves towards the center, creating space for Meireles to carry the ball forward and shoot from distance.

[11:58] Meireles shoots from outside the box. The shot was blocked.

From Terry winning the ball off of Bendtner, Chelsea has now taken about 30 seconds of attacking play, moving from center to left, left to right, right to left and back to center. And what comes out of it? A hopeful long range effort!! 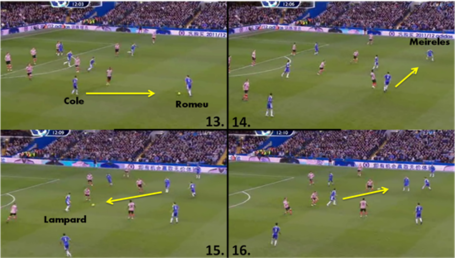 [12:02] Cole collects the loose ball around the edge of the D and lays it back to Romeu.

[12:05] Romeu squares the ball to Meireles who has dropped back for support.

[12:10] Lampard sends the ball all the way over to Bosingwa on the right. 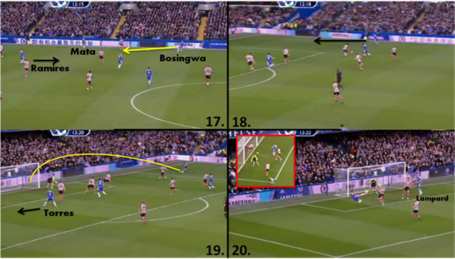 Even though they weren't the one on the score sheet, Romeu, Mata and Meireles were very much involved in this move. All three took three touches and made three passes -- most out of all players involved in the move (Note: I'm not counting Lampard's shot as a touch). Terry only had one but it was an important one that started the break. Cole took two touches while Bosingwa took one but the latter's pass played a bigger role in this goal.

Editing the photos and writing this post have left me with little desire to write a conclusion. So you get to be involved and come up with your own! Oh, yes, you are welcome!