No, really. I'm serious, man. Just take a glance at the image below. Look, I swear it's not photoshopped. Look at his hair. I mean, how could I 'shop that? 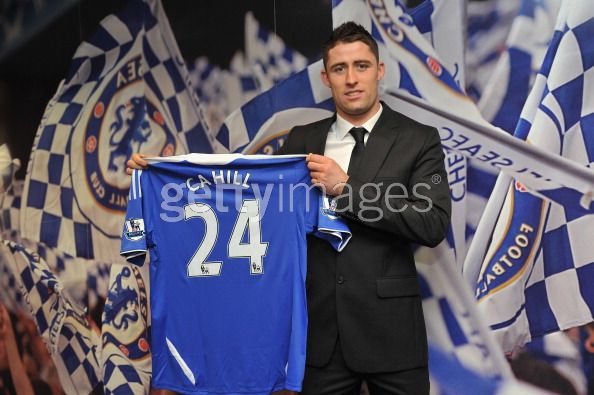 From now forth - or at least until he fucks up - Gary Cahill is a Chelsea player. The club officially unveiled the 26-year-old defender this afternoon after a prolonged courtship that saw the sides clash over personal terms for almost two weeks before coming to an agreement.

As you have heard, a fee of around £7 million was paid for Cahill's services, with the player signing a five-year contract that puts him on what is believed to be about £80k per week. Again, a hefty price tag for a guy who doesn't look likely to break into the starting XI at the moment, but, who knows, perhaps he will prove me and others to be woefully wrong. I hope so.

Here's what Cahill had to say today after letting the ink dry:

Chelsea is a massive club, it is a club that looks to win trophies season in season out and it is a big opportunity for me to be a part of that. Opportunities like this you can't turn down.

And here's what Andre Villas-Boas has offered:

He had good technical abilities which is important in the way we want to play and to implement our passing philosophy.

Cahill's homegrown, an established England international, not cup-tied for this season, and he's not old. Positives. Also, as you can tell from my image caption, this guy has a ready-made nickname. Wearing 24? Too good. Seriously, how can we not pull out the Bauer references on the regular? Let's just hope he can live up to lofty, Kiefer Sunderland, levels of bad-assness.

So let's get behind our newest signing. Welcome to Chelsea, Gary. We wish you a long, fruitful, injury-free tenure on Fulham Road.