Too much time has been devoted to transfer activity in this space. It's time we get on with the business of matches. This weekend sees a rejuvenated Sunderland visit the Bridge for what promises to be an interesting affair. More, after the jump: 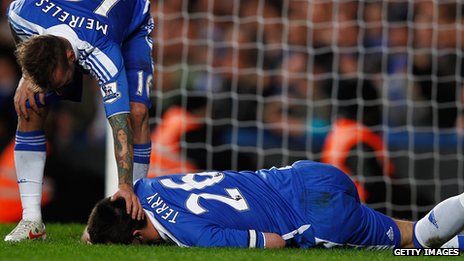 Down, but not out

In our last PL encounter, we put the screws to Wolves on the road, before a ten minute finishing salvo against Portsmouth in the FA Cup. So, while we're not exactly firing on all cylinders, any win at this point can be construed in the loosest sense as momentum. Therefore, MOMENTUM! Much of the discussions since our last match has centered on the impending departures and arrivals of certain players. Jack has already confirmed the Gary Cahill arrival, whilst QPR have increased their offer for Alex (although at 3.5 million quid I'd mark that as more a sign of disrespect- I think certainly he's worth more than that). Anyhow, Cahill won't start, or likely make the bench in time for this one. But, he will undoubtedly be in the stands for this one, and being a home fixture you can bet he'll get a decent ovation. Enough jabbering, on to the specifics:

Why: No explanation necessary, but if you must know- we need wins. Tottenham are on the rise, City look poised to falter, and United are anyone's best guess on how they'll play. In short, if we have any aspirations at all of making a late charge for the throne, it starts today. Well no, it started over a month ago. But we did ourselves no favors in December with that ridiculous stretch of draws. A month ago, I would have been a little less concerned about facing Sunderland, with their inept performances week-in and week-out suggesting the end was nigh for Steve Bruce. Enter Martin O'Neil and suddenly, SAFC are reborn and playing some exciting football. They were 18th when O'Neil joined the fracas. They now sit comfortably in 10th. That's certainly a solid improvement. You'll recall that Sunderland waxed us last year at the Bridge. I try not remembering these things but hey, perspective is important in these proceedings.

Us: Well, it's January and we all knew the ACON was coming (I get LOCKEDDDD UP). No no, the African Cup of Nations has kicked into gear, meaning Didier and Sala have left our fair shores for some motherland madness. Alas, this would be the precise moment when we'd expect Fernando to step into the fold and deliver on that 50 million pound promise from one year ago. It hasn't all gone to shit, and he's certainly looked very impressive in his last two starts. Here's hoping he gets the start and produces another solid outing, and hey, maybe a return pass on a breakaway that gives him the goal he so desperately needs to boost his confidence and start pillaging again (RAMIRES, I'm looking at you boss). John Terry and Daniel Sturridge have both passed late fitness tests to be cleared for action, while Bane and Obi continue to ride the pine and nurse their creaky hamstrings back to form. Flo is also a doubt for this one. Meanwhile, get this, Michael Essien has been making some magnificent strides in his recovery that he might well occupy a place on the bench for our match next weekend. Awesome. 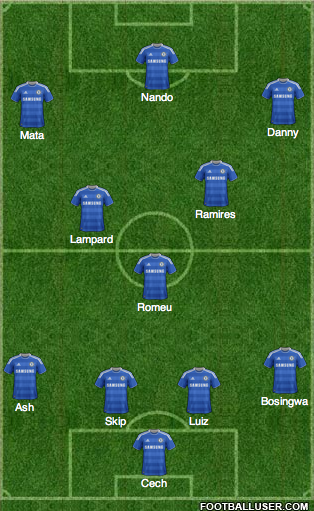 There you have it. Nothing spectacular. Nothing too surprising. I'm estimating the bench will feature the likes of: Lukaku, Meireles, Paulo, Josh, Ryan, Ross, and probably Nathaniel C. Certainly, a youthful and thin bench but one that has a touch of experience in the vets. We're going to be stringing through the month with this lineup for the most part, save for the addition and subtraction of Gary/Josh. Whether AVB continues to add reinforcements remains to be seen- but adding Essien into the mix next weekend is just plain awesome. Bear in mind, with regards to this match, that we're been fairly shit at home. We've only one four of our last nine home matches in all competitions. Gross. A bit of odd stats to note, the last six matches between these clubs has netted 5 goals at or after the 90 minute mark. We all know how many defensive letdowns we've had late in games. Certainly Martin O'Neil will be charging his squad with instructions to attack us hard at the end of halves or after goals are scored- and he will be drilling them to come at us hard on set pieces. Provided we can cover our bases, we will see this one out. But provided is not good enough- we have to return the favor on the offensive end and use our resources to score goals a plenty.

Them: There's a distinct possibility Nicklas Bendtner will be fit for this one. Hooray. At least I have someone to jibe at incessantly on Twitter if it all falls apart. Frazier Campbell is fit for this one, while Connor Wickham and Phil Bardsley could return for the match. Ruled out for this one are Wes Brown, Jack Colback, and Titus Bramble. The former two are for legitimate reasons. The latter? Well, let's just say he tends to get a touch grabby after hours. We can just leave it at that. For Martin O'Neil the story has been all about instituting a new-found confidence in the offensive half, with goals pouring in from all angles. Under his stewardship, the club have one five of their last seven matches. Under Steve Bruce, then won five of their last twenty. Talk about impressive.

To win, it will require a few things. First, the back line has to start deep. I know I know, I say this all the time, but we really need to be on our toes about this one. Sunderland will catch us on the break, they have the speed out wide and with Sessegnon in the middle of the park they have the requisite weapon to punish our midfielders. Bendtner's height is going to hurt us on set pieces, and they'll be targeting him throughout, especially on corners. Whoever gets the charge, John or David, they need to be on their toes and reading his runs. On offense, we have to control the ball and spread the defense. Sunderland have a tendency to play very compact and offer space on the wings to play long crosses. It will therefore be necessary for guys like Ashley and Jose to not hesitate and whip those passes into the box when presented. But, a player like Juan will need to wear his extra-special boots if he has designs on weaving through the interior channels and setting up passes.

For Nando? Well, I can't offer anything in the form of a tip on how to get it done. Just do what you've been doing. Run a lot, create space for passes, and find the open man. The goals will come, and right how you're looking like our best playmaker. So shine on, you crazy Spanish diamond.