The bid is in: For Alex that is

Share All sharing options for: The bid is in: For Alex that is

It's safe to say Alex has not enjoyed the new year thus far. After Andre Villas-Boas kicked the bold, bald Brazilian to the Cobham curb earlier in the winter, he was left to fend for himself on just £50k per week. Just really, really terrible.

Thankfully for Alex, the nightmare looks to be coming to an end. 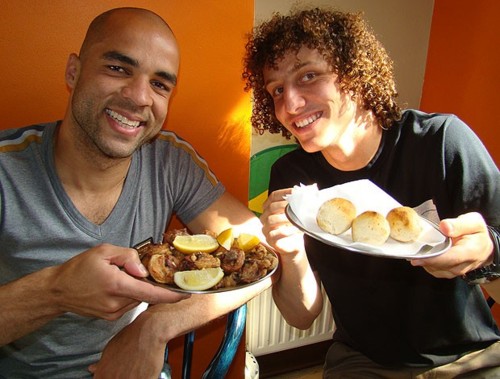 Now, before your criticize my intro, slow down a bit. All of the above sarcasm is offered up in jest. Sure, the way some in the media treated Villas-Boas' isolation of Alex and Nicolas Anelka was a bit sensationalist, but it was still kind of a salty way to deal with a pair of transfer requests. That said, we have no real idea of what actually happened between the two parties.

Moving on. What we do know is that Anelka is now swimming in renminbi out in the Far East, and that Alex is close to making a move out of town. Well, perhaps not out of town.

Today, in his pre-match press conference for our match with Sunderland on Saturday, Villas-Boas confirmed that the club have received a bid from a Premier League club for the Brazilian central defender. That club is widely believed to be our London neighbors, Queens Park Rangers.

From what I know from my chief executive, there has been an approach from a Premier League club. We have respected Alex's transfer request so the market's open for him. We're just trying to reach the level of proposal we think is good for the player. Nothing has happened up to now, but we'll listen to all offers. We'll present anything to the player. He has to make a decision. He has generated interest from a lot of clubs.

Cool. We can gather from this quote that the club aren't enamored with the initial offer submitted from this unnamed Premier League club (QPR). Come back with a serious offer and we'll do some serious business, say AVB. I like the way you handled that, bro. It's quite clear that Alex is hardly an also-ran defender in this league - proving to be capable of elite level defending on regular occasion - and we shouldn't be accepting also-ran money.

Still, there's no question we need to get this business done fairly quickly considering the saga that has become Gary fucking Cahill. Who would have thought we would be in this kind of a predicament - meaning short on defensive cover - after starting the season with perhaps the most center-back depth in the top flight? More on all that later.

For now, what do you think about Alex to QPR?